Los Damnificados and Abejas asesinas - The Damned and Assassin bees 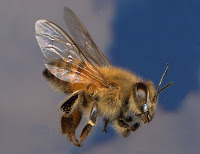 In the early excited flush of becoming beekeepers four years ago, we naturally thought that honeybees should be everywhere and could improve the quality of everything. Of course we advocated local honey for allergies and honey poultices for burns and beeswax for lip balm.
We even lobbied heavily for the introduction of honeybees to Aquiares, our favorite coffee finca in Costa Rica. Our research showed that honeybee pollination could increase the coffee yield by 7%, which is not insignificant. (It could be an additional 1750 quintals.) An excellent idea. 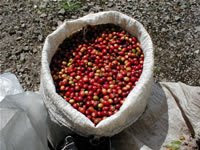 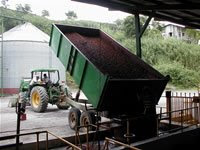 Except that it was not. Management told us that if they were to install honeybees on the finca, they might have more coffee but they would have no one to pick it; the pickers would refuse to come.
Since 1957, when 29 Tanzanian queens escaped from a lab in Brazil, Africanized hybrid bees have been making their way north at the rate of about 200 miles a year. By now virtually all the honeybees in Central America are Africanized. A single Africanized bee collecting nectar from a coffee flower is no more frightening than one of our friendly Italian bees, but en masse and when defending their hive, the Africanized bees are ferocious and aggressive. The American press calls them Killer Bees, which of course beekeepers find objectionable and highly alarmist.

In Spanish they are called Abejas Asesinas. Assassin Bees. 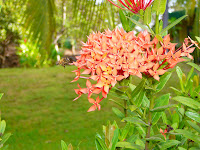 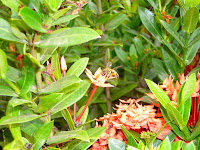 Here is an Abeja asesina alighting on an orange flower whose name I do not know. (Which distresses me.) Note that when they are out and about conducting their honeybee business, the Abejas asesinas are no more ferocious than any others. I was close enough to take this photo, and was not stung. Q.E.D.


Language matters.
While “Killer bees” sounds theatrical and histrionic, like fodder for a horror film, “Assassin bees” sounds deliberate, like suicide bombers. Which is not far off given that the word assassin originally derives from the Arabic hasisi or hashish eater, because the Islamic sect of that name were said to imbibe hashish before heading out to murder, or assassinate.

About a week before we visited Costa Rica there was an earthquake near Volcan Poas and the mudslides it precipitated caused enormous damage and at least 28 fatalities. In Spanish the victims of a natural disaster like that are called LOS DAMNIFICADOS. If you happen to be in Spanish speaking country when there is a natural disaster, in every newspaper you open you will see, in two inch thick black type: DAMNIFICADOS.
Now even though my Spanish is adequate (barely) and I know what damnificado means (victim) I read the DAMN and my mind leaps to the DAMNED and DAMNATION - conditions that are, yes, wretched and fraught with implied judgment.
That was what happened when I was in Nicaragua right after Hurricane Mitch, and again this past week after the Poas earthquake.
Empresa privada dona 13 contenedores para damnificados
Damnificados reciben 15.000 paquetes de comida
Tos, alergias y depresión enferman a damnificados
And so on.
Posted by Christine Lehner at 5:28 PM