Why Kentucky? Why the Falklands?

Like certain sexually transmitted diseases, the archive that is the pile of still-unsorted papers from the Orchard has proved to be the Gift that keeps on Giving.

Yes, we moved Mom out of the Orchard 3 years ago, and we sold the house 2 years ago. But, in her valiant effort to empty the house in time for the sale, my sister took hundreds of pounds of unsorted files and papers back to Maine with her, to sort at leisure. A very funny concept of leisure, it is true.

Over the years some of us have enjoyed the wide variety of weird solicitations that come in over the transom for my mother. And for the past 3 years my sister and I have been fielding, ambushing, and then jettisoning said weird solicitations.

We were pretty inured to supplications from Little Sisters of this and that, the Needy Orphans of Cairo, as well as the Fund to Save the Gothic Revival Outhouses of Western Massachusetts, or the Steering Committee for 2035 - Celebrating 400 Years as Bucket-Town, even the Society for the Reinstatement of New Belgium in the New World. We thought nothing could surprise us.
Wrong, again.
My sister just shared with me this personalized solicitation that my mother received in 1982. And then saved for the next 30+ years. 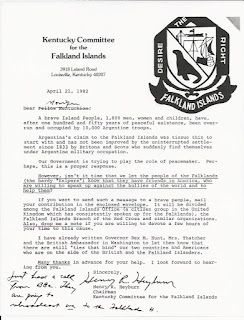 While the population of the Falklands hovers around the 3,000 mark, Kentucky has 4.4 million inhabitants: in both cases most of the residents trace their ancestors to the British Isles.

Kentucky has more miles of navigable rivers than any other state in the US. It has also the two largest man-made lakes east of the Mississippi, and the longest cave system in the US. The Falklands are 0% water, but – predictably – are entirely surrounded the Atlantic Ocean.

The entirety of the Falkland Island print media consists of The Teaberry Express and The Penguin News. Kentucky has colorfully-named conflicts: The Beaver Wars of the 1670’s, and the Black Patch Tobacco Wars of the twentieth century.

The Kentucky state seal features two men facing each other in what we can only hope is friendship; one is wearing buckskins, the other is wearing formal tails. 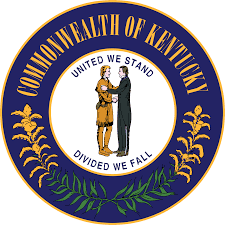 The Falkland Islands seem to have two coats of arms: one depicts a sheep, while the other pictures a somewhat misshapen seal. 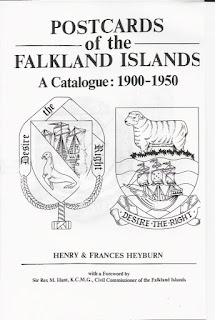 It is unclear whether my mother sent money to the Kentucky Committee for the Falkland Islands. Who was this person, this Kentuckian, so obsessed with the valiant Falklanders? And why should anyone else care? His solicitation strikes me as equivalent to me hitting up everyone I am connected to on Linked In and everyone they are connected to, for the Fund to Pay Groundskeepers for the Holy Wells of Dubious Historicity in Brittany and Wales.

Posted by Christine Lehner at 11:57 AM

I love your ability to take the flotsam and jetsam of ordinary life and turn it into the gold of literary musings! Thanks for another great post that dazzled my intellect and tickled my imagination! And thanks for all those fun facts about Kentucky and the Falklands!