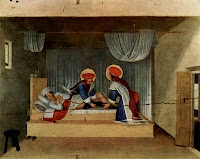 It’s the feast of the twin brothers Saints Cosmas and Damien (At last it was until 1969 when the Powers moved the feast to yesterday, but Butler’s still uses today and hence I do as well) and we spent the afternoon learning to make mead.

The brothers were born in Arabia in the 3rd century and practiced the healing arts in Syria, where their habit of accepting no payment for their services caused hem to be known as the Unmercenary Physicians.

Mead is the earliest fermented drink, made with honey, water and yeast. It is described in the Rig-Veda. Aristotle discusses its merits as does Pliny the Elder. Wherever Greeks were carousing, you can be sure the mead was flowing.

Cosmas and Damien’s most famous medical miracle – and the one most often painted - was the grafting of an Ethiopian (black) leg onto the amputated leg of a (white) patient. It is easy to see why the subject was appealing to painters.

Despite all their good works, or because of them, Cosmas and Damien were martyred by Diocletian, that most prolific of martyrwrights. (Speaking of vocabulary, hagiography needs this word to mean they, the persecutors, whose persecutions make martyrs of their victims.) Their skulls (all four of them) are venerated in Madrid as well as Munich.

Because they were also beekeepers, some of the best mead in Europe has always been and still is made by monks.

In many churches, especially in the Latin world, it is common to leave a small silver or wax (beeswax) representation of whatever body part is ailing (called ex-votos),before a shrine. In Naples, on this day, the most popular body part to be placed before the shrine of Saints Cosmas and Damien is a penis. Or at least it was back in the late 18th century.
Posted by Christine Lehner at 6:28 PM

Oh, for a glass of mead to heal all body parts!