Like the farmer in Breughel’s painting who plows his field undisturbed by Icarus plunging to his watery death because the wax in his feathery wings melted when he flew too close to the sun, and like the dogs in Auden’s poem going on with their doggy life, yesterday we slowly removed the honey supers from our rooftop hives. 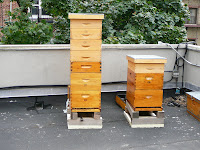 While Wall Street was in a freefall, while Lehman Brothers disintegrated and AIG was being bailed out, while the Unemployment Bureau was offering re-training seminars to middle management analysts, while Bolivia is on the brink of Civil War and the Peace Corps has evacuated all 113 volunteers from the country (including CSB’s nephew - now about to travel the length of the Amazon by motorcycle), and while we learn from Morty Sobell (whose stepdaughter introduced my dear friend B to her current husband - but that's another story) that Julius Rosenberg really did sell secrets to the Russians and thus alter all our perceptions of the fifties, we were harvesting honey.

First CSB carefully pried apart the frames that were sealed with propolis (from the Greek pro-before and polis – city. Also called bee-glue). Then he removed each frame, shook off the bees and handed me the frame. I gently brushed off the remaining bees with our super soft bee brush, and placed each frame in a plastic bin we had acquired for just this project.
Repeat above forty times. 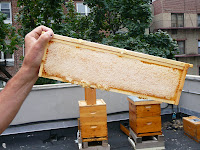 Since the hives are atop a four-story brownstone, and the roof is only accessible by four flights of stairs and then a steep ladder, CSB had constructed a pallet upon which he could lower the honey-laden frames (sealed inside the plastic bins so as not to drip honey all over the house) down the hatch to the bottom of the ladder. Then we carried them down all 4 flights. Each bin weighed about forty pounds (My very approximate and subjective guess. Heavier than a two year old.).

Once the honey is extracted and jarred, we will have a few pounds of wax to melt and clean and harden in old milk cartons, and it will be exactly the same as the wax Daedelus used to make the feather and wax wings for his son Icarus, for their ill-fated escape from the labyrinth at Knossos. (As we learned from Ovid in tenth grade Latin class.)
Posted by Christine Lehner at 11:46 AM

This is one of your best posts yet;
I love the way you mix the terrifying news of Wall Street,the bailout of AIG (in whose Greenberg-terrorized cubicles your dear friend B used to labor, but that, too, is another story) with the humble and moving details of harvesting honey.

The first two paragraphs are worthy of the best of Virginia Woolf! Perhaps if she had been a beekeeper, she would not have filled her pockets with stones and walked into the River Ouse!