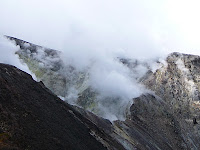 The last time Turrialba Volcano erupted was in 1866. The 19th century was a busy one for Turrialba, when the 10,958-foot volcano blew its top no less than seven times. The 20th century was quieter, if only for the Turrialba Volcano and its three craters. Sometime in the 1990’s we drove part way up and then hiked to the volcano’s rim to peer into its vastness.
Then in 2001 the central crater started spouting fumaroles. But visitors were still welcome. In January 2007 we drove with the Aged P’s to the very top and stood on the Mirador as wisps of smoke danced before us. On the way back we stopped at a lovely lodge and drank hot chocolate laced with tequila, a relatively unknown but delicious combination. 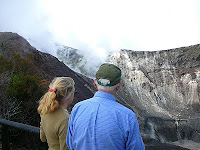 That has all stopped since January of this year when Turrialba Volcano spewed ash and created acid rain that forced the lodge to shut down, and 2 villages to be evacuated.
This afternoon the volcano was sending up snowy white smoke, surprising in its whiteness, vivid against the blue tropical sky. It is always a good thing to see a volcano before one’s siesta. 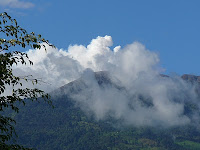 Posted by Christine Lehner at 7:10 PM No comments: 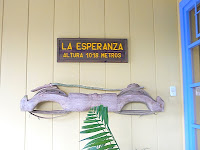 It used to be that soon after we arrived here at the farm, we would realize we were sharing the house with toads. Large knobby toads the size of cats. The very first time I saw one I thought it was a doorstop, because it was sitting there – squatting really, poised for the next hop, if only I paid attention – by the door that leads from the big sala out to the terrace. Where are the toads?
The terrace has a view of nearly everything: the village, the church, the beneficio and the drying patio, the horses and the houses. When the beneficio caught on fire we were sitting on the terrace and watched the first tendrils of smoke lick the sky.
On the terrace we can watch for the itinerant priest’s Jeep to come tearing up the road from Turrialba and time the start of our walk to mass so as to arrive just as his Jeep would come to a jolting stop in front of the church doors, its headlights briefly illuminating the crucifix above the alter, against a background of sky blue stenciled with silver stars.

Bamboo grows 3 centimeters a day, up to 1 meter a week. This is not negotiable.

The white sap of the ficus tree has excellent antibacterial properties, and is effective against the sting of fire ants. I speak from experience. 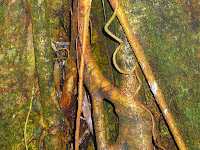 Three seeds of cardamom in a cup of hot water will relieve stress. If you drink it. This may explain why the three-year old Reine would insist we stop the Jeep by the cardamom plants and get her a handful of seeds to chew. Or perhaps she liked the flavor.

Inside the spiny seed pod of the Achiote (bixa orellana) are bright red seeds ¬used to color your food. Red. 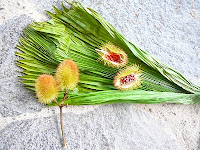 But the Imperial Ginger Torch is entirely ornamental. 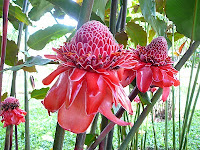 The following are all endangered in Massachusetts:

The meta-population of marbled salamanders in Mansfield,

the Blanding’s turtles of Rattlesnake Hill,

and the Blue-spotted salamanders in the Hockomock Swamp.

But not the Rock Snot. That is thriving.
Posted by Christine Lehner at 12:14 PM 1 comment: 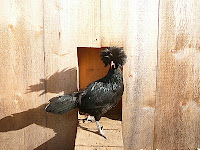 Naturally you have all heard of the pecking order. We seem to have the pecking order – more pecking than order- made manifest in the henhouse these days.
You surely recall Bump? Bump was one of the first to hatch from our initial batch of 25 beautiful eggs from Annie Farrell. The Hoffman boys kept them in an incubator behind the couch in their octagonal room in which they watch Notre Dame football games on a big screen TV. Fifteen eggs hatched. An astounding 10 of them turned out to be roosters and hence made their way to Yonkers, leaving us with 5 hens, of which Bump is clearly the most remarkable.
Even before we knew Bump was a she, we knew she was special. She has a topknot, a pompadour, a frizzy Mohawk, a vertical hairdo, a beautiful black crest. She is a Crevecoeur, a breed developed by the French (mais oui) from Polish stock (the same poignant Polish sensibility that sent their cavalry to face the German Panzer Division in WWI). And like the cavalry, Crevecoeurs are now an endangered breed.

A couple of days ago CSB noticed a raw patch on Bump’s back, just in front of that spot where her tail makes its elegant swerve to the vertical. Clearly Bump was being picked on and pecked at.
We went to our poultry bible, Raising Chickens for Dummies, and found this disheartening explanation:
“Chickens are conscious of colors and patterns, and they often pick on a bird that has different coloring, color patterns of feathering than the majority breed…Chickens with topknots are frequently picked on by other types of chickens.”
In other words, chickens can be bullies.
I consulted Butler’s to see if anything in the life of Saint Brigid, the patron saint of chicken farmers, could prove helpful in this matter. No. She is also the patron of milkmaids, bastards, poets and printing presses, and seems to have lavished all her patronly wisdom on them.
Now we are considering slathering Bump’s exposed posterior with honey, which is antibacterial and has great healing qualities. CSB is worried that the other hens will redouble their bullying when they discover how sweet the honey is.
I am considering arnica. 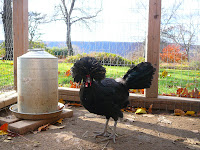 Posted by Christine Lehner at 11:59 AM No comments:

It is completely illogical if you take the trouble to look twice. Don’t I eat chicken on a regular basis? I am excessively fond of curried chicken, I also dote on coq au vin and chicken soup with quinoa; I would walk a mile for good chicken molé. I like chicken korma and chicken Marengo and Moroccan lemon chicken. Tarragon chicken was a childhood favorite, which reminds me: why hasn’t my mother cooked it lately?
All of the above chickens were undeniably dead when I cooked and ate them.
So why the lamentations, the gnashing of teeth, the tearing of hair and rending of garments?
Oh, woe, our first dead chicken.
But, as CSB gently reminded me, it was far from our first. What about all those roosters dispatched to a stewpot in Yonkers? Don’t they count? Wasn’t the strutting, tootling Alonso the very first of our chickens to die? Is it their maleness, their testosterone-laden morning alarums, that disqualifies them from being the object of mourning?
When I examine my reactions, it is hard not to infer a certain gynocentric-favoritism.

It came about thus:
Friday morning I visited the chickens and saw one of the Plymouth Rocks perched atop a cross beam, her rump facing my direction. She was trying with all her might to push out an egg and she was not having an easy time of it. I sympathized, as any mother would. The egg was about a third of the way out, and covered with blood. With effort, she would push it out farther and then several other hens, below her on the ground, would peck at the emerging egg. I shooed away the annoying harpies, while the laboring hen pushed and the egg came out further, then receded back into her bloody cloaca. I stroked her back and tried to make encouraging and midwifey cooing sounds. Other hens came around to bother. I stroked her and nudged them away. Finally she expelled the bloody egg, hopped off the perch, shat and wandered away.
About an hour later I returned and found her inside the chicken house, supine and dead on a nest of fresh wood shavings in the far corner beneath the nesting boxes. Other hens stood around showing varying degrees of lack of interest. I wrapped her in an old white sheet and put her in the garden shed, because I was about to leave for Linwood and wouldn’t have time to bury her, and I certainly could not leave her with her cannibalistic brethren, that is, her sistren.
Poor thing. Our first dead chicken, I thought melodramatically.
All afternoon, as I drove in my shiny new red car towards tree peonies and dairy farms and the Soaring Capital of America, I considered the brief life of our Barred Plymouth Rock, she who, at one-day-old, arrived at our local post office and come to live with us, along with a dozen other chicks, presumably her siblings, but not necessarily.

My face grew red and blotchy, my eyes became puffy and itchy and my skin tingled and prickled. Even I began to see this was an overreaction to a pullet’s demise. After all, such is nature.
It turns out I am allergic to my new car. After considering and rejecting several other theories, it became clear that the only possible cause for such bodily disruptions was the new car, with its Volatile Organic Compounds (VOCs) exhaling and out-gassing.
And yes, if you Google new car allergy, you will find that I am far from the first person to have identified this syndrome. But I may be the first to have initially confused the symptoms with chicken grief.
Posted by Christine Lehner at 12:34 PM 1 comment:

After 11 years and 203,000 miles I finally relented and went shopping for a new car. It took that long and would have taken longer but for the constant and troubling illumination of several warning lights and arcane symbols on the dashboard of the elderly car, because I would rather have a colonoscopy in a 3rd World Country than go car-shopping. The very thought of wasting a perfectly fine day car-shopping gives me such palpitations that I have to take elephant tranquilizers and then I fall fast asleep in the car showroom, or try to. If I don’t take elephant tranquilizers and still go car-shopping then I get profoundly carsick just sitting inside a car parked inside a showroom.
But I bravely overcame all the above obstacles, and more, and managed to acquire a new car, which we picked up last week. Poor CSB was distraught about the color. He was convinced we were getting a dark blue car, the exciting color of a banker’s suit. Instead we have a red car. We are not sure how this happened. At least he is not.

Here are some disturbing things about a new car:
1. It is not an old car.
2. I find myself worrying about nicks on the outside and shortbread crumbs on the inside. This is not normal.
3. It took me about a decade to master certain electronic functions of the previous car. Now I have to start all over again with a GPS screen, a disembodied voice telling me to go the wrong way, and several manuals.
4. Because the old car is still in the driveway - since no one wanted to pay any money for it - the new car had to get its own new license plate which means I have to memorize a new license plate number, which means I need a new mnemonic device. The old license plate was so easy: Dead on Arrival plus Manhattan. The new one is more challenging but this is what I have devised: A musical refrain with a stutter, followed by the year in which the fire extinguisher was patented by an English man named French, which is also the year in which Peter the Great rescinded the Ban on Beards, and also – sadly in my case – the only year in the 18th century in which not a single saint was born, died, canonized or exhumed.
Posted by Christine Lehner at 4:48 PM 1 comment: