I realize that most people visit Berlin for the currywurst, or the head of Nefertiti, or Checkpoint Charlie that is no more, or figuring out from which window of the 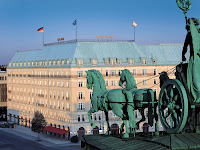 Hotel Adlon Michael Jackson dangled his young son, or Frederick the Great’s summer cottage at Potsdam, and those are all fine things to travel for. But the Egg Hats of Pension Kettler are also an excellent reason to visit the once-divided city. Let me explain.
Thanks to the diligent research of Anna, extremely stylish art-historian and young mother, Bine and I stayed last week at the Pension Kettler on Bleibstrau Strasse. The price was right and the rooms were straight out of the 1920’s, including the plumbing. Each room is named for an artist, and I thought this was because the named artist had actually once stayed in the room.

This misapprehension was the result of my pint-sized German. But so what if Maria Callas never stayed in my room: outside my door there was a handmade diorama featuring the highlights of her career. Across the hall, the Peggy Guggenheim (who likewise never actually stayed there) diorama featured a pair of exotic sunglasses.
Frau Isolde Josipovici, the proprietress of the Pension, is known in certain Berlin circles as the “Fountain Fairy” (die Brunnenfee) on account of her work restoring Berlin’s derelict fountains. She also takes great pride in preparing breakfast and delivering it to your chamber. The only problem is that the esteemed Frau has a bad hip, a very bad hip, and if I understood correctly is awaiting her hip surgery, but meanwhile she limps rather extravagantly, which makes it impossible to carry a tray laden with teapots, coffeepots, cups, saucers, eggcups, honey, cheese, ham and bread.

And eggs hats. But this problem was solved when one of us went to the kitchen, midway down the famous 40 meter hallway, and carried the tray back to the Maria Callas zimmer. Followed by the careening Frau Isolde. Once we had deposited the tray, our hands were summarily swatted away - “This, I will do!” – by Frau Isolde who has a very special way of arranging the table. And each morning our boiled eggs (neither soft nor exactly hard) wore a different pair of hats. Though at first I did not realize that there would be new hats each morning, but soon this became clear, and even when I felt that could not stomach another egg, I also could not forego the chance to see which hat would come next.
No, we never exhausted the collection. 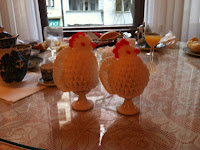 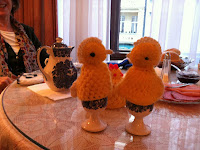 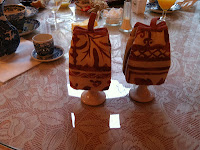 If you want to know more about Frau Isolde and Pension Kettler, you can read here from the English version of the website:
She rented an old-Berlin apartment after the career as photo-model and mannequin beginning of the 70er years. In originator-time - and Art-Deco-Stil, she " did her/its/their pension " from it.
Pictures, gifts of friends, hang at the walls of the 40 meters long hall. The widow of a Jewish art-historian and -händlers puts down beauty and individuality against cold uniformity. Her/its/their living room resembles a parlor of the 20er years. No coincidence - meets here regular Berlin artists however. Not art-connoisseur par excellence but as lover of distinctive pieces sees her itself.
Why the commitment for it, that the wells flow? " The beautiful has no unmitelbaren benefit for many people. Exactly therefore, I want to fight for it that gets it remains ". Watches, like in this city " the culture the brook down goes ", that can can her. So, she commits herself also to the conservation of the Berlischen gallery.

James Bond and I have something in common: our mothers share the same name. Of course his mother tragically died in a 'climbing accident' when James was a boy, and mine is alive and well and still delivering the last word in fenestration, protocol and oriental carpet maintenance.
Posted by Christine Lehner at 3:00 PM 1 comment:

The storm, past tense

For the first time ever we managed to use every heavy-duty extension cord we have, and we have a lot. More than is normal. Specifically we have 4 orange cords, 1 green cord, 1 purple cord and 3 yellow cords. If strung end to end we might have reached Yonkers, but no, we did not string them end to end because that would have been unsafe, and safety is good. We plugged them into the little generator and that way we could keep the heat lamp on for the new baby chicks.

Thanks to the high winds of Hurricane Sandy, aka Frankenstorm, we lost power Monday night, and thanks to the ministrations of ConEd crews, we regained it early Friday morning. Not so bad when you think about it, in the grand scheme of things, given that for the bulk of history, people lived their whole lives without electricity and most of them never complained. (As I did). They also lived without Gatorade, Girl Scout cookies and Donald Trump.
What we lost: the top half of a very large and old white pine, and on its way down, this white pine crushed the magnolia and the weeping hemlock. Gone. Creating a gap in the arboreal landscape, a space where there used to be foliage. Which I am discovering is very different from a similar space that never was filled with foliage in shades of green. CSB says he will not miss the weeping hemlock, but he is quite sad about the magnolia. I will miss them both. 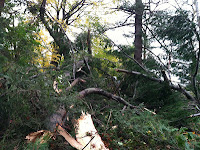 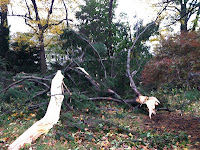 What I missed: hot water.
What I enjoyed:
Going to bed by candlelight and then reading about Cuba with my headlamp.
Also, dining out on Sandy. The Powered fed the Powerless. Friends who did not lose power* invited us to dinner — and so thanks to the storm our social life improved by a factor of 1000%. The food was universally excellent, and the conversations ranged from South African flora to oysters in New York Harbor to geriatric medicine to Aged P’s to LBJ and the question of politicians and their excessive testosterone.
What I discovered when the lights came back on: that our floors - unvacuumed, unswept and largely unseen for a week - were covered with a fine layer of dog hair.
What else I discovered: the disturbing reality of my slavish devotion to incandescent lights and playing Solitaire on the computer.

* Not unlike the rest of the world, power and power outages in Hastings and New York are unevenly distributed.
Posted by Christine Lehner at 4:48 PM 1 comment: