Nothing in Common goes South, the Last Day 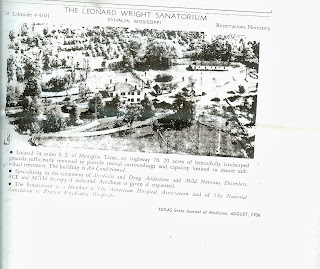 that has since been razed to make room for a gas station (we were not sure whether it was the Gulf or the Sunoco), or that Eudora Welty was born there and died there and had piles of books on very surface in her house, because I expected those things. But still.
Here it is already the holiday season that traditionally fills some of us – me – with sticky peppermint anxiety and jingle-bell-induced neuralgia, and it seems like a good idea to jump ahead and wrap up the Nothing in Common Southern Road Trip Annals.
So it was our last day. On our second to last day we visited Asheville and got a tiny bit lost in the lovely cemetery where Thomas Wolfe is buried, before visiting the Sliding Rock in the Pisgah National Forest where CSB fondly recalled certain youthful debaucheries, but I won’t go into that because we are jumping ahead to the last day. 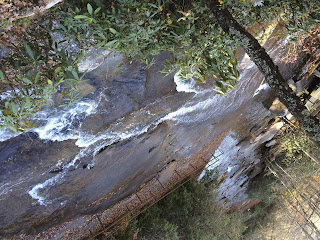 On our last day we departed North Carolina and entered Virginia at 7:10 am. For some reason I noted that time, even though I had not done so on previous occasions of entering or exiting a state. CSB’s father was born in Virginia; he was a Branch of Virginia. Having entered Virginia so early no sites of note (neither the Museum of the Confederacy nor the Edgar Allen Poe Museum) were actually open when we arrived in Richmond. This was fine. We drove around and made several U-turns at the behest of Lorelei, our GPS. So it was that we discovered one of CSB’s illustrious ancestors: John Patteson Branch, a man so clean that he wanted the whole city to be clean. 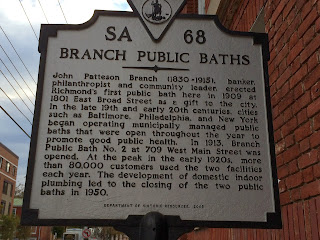 It was definitely time to head north. I realized that while CSB’s forebear was promoting “good public health”, my own ancestor, Auguste (or Gustav) Brancart was busy publishing erotica in Belgium and the Netherlands, promoting another kind of health. It seems unlikely their paths crossed. But then, here we are.

Posted by Christine Lehner at 2:21 PM No comments: