Some people can look with pride upon their family trees, pointing out the mad scientists, cattle rustlers, burlesque dancers and Ping-Pong champions inhabiting the familial branches like the homicidal squirrels in our black walnut tree. A friend of mine can even claim a genuine saint (St. André Bessette) as a forebear. (It goes without saying that I am rendered a lurid shade of lime green with envy when she flaunts this relation.)

For years we have sought such illustrious ancestors, and come up – how shall we say this? – short. Until recently, when a certain cousin of mine(maternal side), the only member of our generation to carry the illustrious name of our Belgian grandfather in the New World, discovered an ancestor we can wholeheartedly claim.

Auguste Brancart was born in St Quentin, Belgium in 1851. From 1880 to 1885 he was a bookseller and publisher in Brussels. He then moved with his wife and young son to Amsterdam, where he fathered four daughters, and gained his worldwide reputation as a man on the cutting edge. He published the first known edition of My Secret Life, originally anonymous, now attributed to Henry Spencer Ashbee*; Rachilde’s The Mysteries of Venus, Fanny Hill and countless other books with titles in the vein of The Adventures of the Cross-Dressing Abbot, The Callipygian, or The Delights of the Penis; Lessons of a Voluptuary, or General Confession, and The Phallic Hotel: Vaudeville in Two Acts.

Or put more succinctly, a pornographer. A distinguished pornographer, to be sure, the founder of the Société des bibliophiles cosmopolites. A publisher credited with being the “link between the 19th and 20th centuries, between the ‘quality’ publishers …and the sordid colporteurs like Elias Gaucher.” A pornographer wanted by the police in two countries, but still, a pornographer.

So what happened to the family fortune? After too many unfortunate interactions with the Amsterdam police, Brancart fled to Antwerp in 1894 and disappeared from the public record. There remains much to be discovered.

*Another interesting character of which I may write more later. For the time being, it is worth noting that one of his various pseudonyms was Apis, which as you know, means Bee. See his personal bookplate. 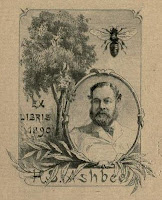 He said, “I can’t walk down the street with you if you wear that hat.”
She said, “I paid a lot of money for this hat. This hat cost me three weeks of egg sales.”
He said, “You might have asked the chickens.”
She said, “Are you saying you don’t like it?”
He said, “I am saying that it puts me in mind of a crack in the sidewalk so wide and so deep that it swallows up children and small adults.”
She said, “No hat deserves that.”
He said, “Yes.”

Posted by Christine Lehner at 11:31 AM 3 comments:

Last we heard the Vatican was sanctioning prayers to halt global warming. Now the Popemobile has gone electric.*
Could women priests be around the corner?

*Thanks to my excellent apian/vatican clipping service: BMLK.
Posted by Christine Lehner at 10:17 AM 4 comments:

Many are the ways to divide and distinguish the people of the world: Men v. women. Lefties v. righties; Sunnis v. Shi-ites v. Moonies; Red Sox fans v. Yankee fans v. everyone else; Stilettos v. Birkenstocks v. Mukluks; Hair-twirlers v. thumb-suckers v. earlobe-pullers.
These are the telling details that reveal so very much.
But few distinctions carry the weight of Bovril* v. Marmite** v. Anything But***.


My siblings and I were brought up with Bovril (fondly referred to as: essence of cow). We had Bovril, butter and white bread sandwiches. We put Bovril and butter on pasta. We ate hamburgers made with extra dollops of Bovril. We think there are few things better – or more soothing – in life than Bovril straight from the jar. A kitchen cabinet without Bovril is a sad place. 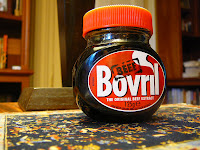 Many happy Bovril memories came flooding back the other evening when my vegetarian brother and I were dining with the Aged P’s at their venerable kitchen table. Perhaps we were discussing the Vicissitudes of Carnivorism or perhaps the Papacy or it may even have been Things-We-Have-Smuggled-Across-International-Borders. The exact topic eludes me, but it led us directly to the cabinet, where we discovered our Sainted Mother’s collection of Bovril & its ilk. 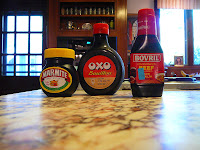 As you can see by the inclusion of Marmite in this trinity, sometime in the past decade our mother succumbed to apostasy. The Oxo arrived along with a Belgian cousin; it is a Continental wannabe among extracts & pastes. Seeking amusement wherever we may find it, my brother and I suggested a taste test. This idea was greeted with some derision, but we prevailed. Not surprisingly Bovril won my top honors, while my vegetarian brother voted for Marmite. (His facial expression revealed the depth of his moral crisis.) We unanimously agreed that Oxo was vile, and threw it away.
But then Sainted Mother retrieved the Oxo from the bin, and excoriated us for throwing it away. Why? Not only was its expiration date a mere five years ago, but also: it tasted revolting. Sainted Mother however dislikes throwing things away, on the assumption that in some mythical future there will be a need for vile rotten Belgian yeast extract, or bottomless threadbare French bikinis (i.e. only the bras) from the fifties.
The only question remaining was: how was the Bovril acquired?
Some of you may recall the Mad Cow (Bovine spongiform encephalopathy, or BSE, though Mad Cow sounds much better) Scare back in the early 2000’s. Around that time the FDA banned the importation of Bovril into the US, for the obvious reason that it is a delicious and highly concentrated form of British cows. Perhaps you were unaware that this staple suddenly vanished from the shelves of your grocery store. It was not a highly publicized event, but slowly it sank in, and some of us became just a little desperate. Desperate times called for desperate measures. Hence the smuggling, the secreting of contraband jars of Bovril in our luggage as we returned from Britain or Canada.

Yet another reason to appreciate Bovril is that it alone of all foodstuffs has been advertised along with the Pope. Early in the 20th century, quite soon after Papal infallibility was deemed to be Dogma by the First Vatican Council in 1870, posters appeared all over Britain (a country not known for its devotion to the Pope) featuring a be-gowned and crowned Pope imbibing a delicious cup of Bovril.

*Bovril, for the sadly uninformed, is a thick blackish paste, a “salty meat extract”. It’s consistency is somewhere between tar and bilge water. Since the 1870’s, when it was created by a Scotsman in Canada to more efficiently get beef into Napoleon’s troops, it has fed arctic explorers, cold & damp hikers, soldiers and my family. (I highly recommend the Bovril website; it is entertaining and not a little weird.)

**Marmite, for the equally sadly uninformed, is a thick blackish paste, extremely salty, made from yeast extract, which is a by-product of beer brewing. It’s consistency is somewhere between tar and bilge water. Marmite was created in 1902 by a British gourmand within minutes of his discovery that brewer’s yeast could be concentrated and eaten from a jar. Like Bovril, it has been a staple of soldiers and explorers, but not of my family.

***Those who favor neither Bovril nor Marmite claim to find both indistinguishable and equally inedible, and that to whatever extent they have ‘flavor’, it resembles solidified refuse from a toxic dump marinated in Dead Sea Water.

The sad truth is that in 1990 Bovril acquired Marmite, and in 2000 they were both acquired by Unilever. So much for healthy competition and fine distinctions.