My Rant about Black Walnuts and their Drupes


Have I ranted about the black walnut* missile attacks before? Most likely. Most likely I do so on a biannual basis. Specifically, during mast years.
It’s been a great year for black walnuts, Juglans nigra, and for squirrels.** It has been a tragic year for my driveway, my back porch, and for CSB’s windshield. 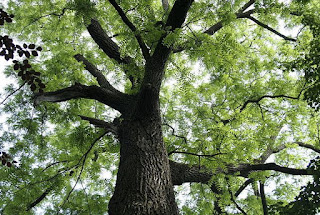 My gripe is with the fruits of the tree: the drupes. ***

We have tried, really tried, to find uses for black walnuts, to justify their existence, and in particular justify their voluminous existence in front of my house. You should never, ever, on any planet, on any continent, plant a black walnut tree near your house or driveway. Because, as Richard Powers says in The Overstory, they are “Trees that bomb the ground so only their young can grow.” What he doesn’t say is that their bombs can stain the wood on your back porch, puncture of your car, cause concussions, and sound like fireworks when they hit the driveway. 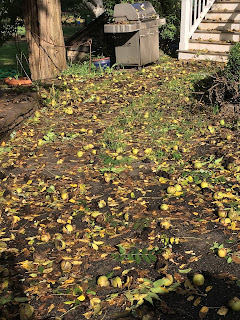 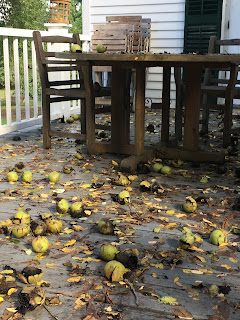 The problem with the black walnut drupes is exacerbated during wet and windy weather, the autumnal storms which we are experiencing in unprecedented profusion. With the rain the black walnuts become saturated and heavier, and with the wind the branches flail about and broadcast the black walnuts. Here at Let it Bee farm they bombard the back porch where they splatter on impact and stain not only the wooden planks but the white clapboard to a height of over 8 feet. They pour down on any patch of dirt aspiring to grow anything but Juglans nigra. They fall on the driveway by the thousands; and they attack any car foolish enough to be parked within the dripline. These foolish cars end up with pockmarked roofs and hoods, and recently, a shattered windshield. When cars drive over the black walnuts on the driveway – because we can’t spend every minute of every day shoveling them up with an industrial strength snow shovel – the bursting of the drupes sounds like machine gun fire. 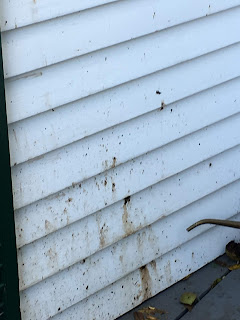 Why do we put up with this tree, in the bosom of our abode? Exactly how idiotic are we? Would not a normal, well-adjusted, rational person chop the tree down, stack up the wood, and plant a benign azalea there instead? I often ask myself: what would a normal, well-adjusted person do in this circumstance [take your pick: recalcitrant chickens, political crises, randy squirrels on the roof, dementia]?
I often bemoan the phenomenon in electoral politics whereby huge swaths of the voting public appear to vote against their own best interests.
Yet here we are, living under the tyranny of the Juglans nigra, every year, and especially every other or mast year, complaining bitterly about the mess and the noise and threat of concussion. We could chop the tree down. CSB’s chain saw is not big enough, but there are plenty for excellent arborists who would happily come and take down this old tree, in stages, at some cost. We could even defray the cost of having the tree taken down by selling the wood: according to the all-knowing Internet, a single tree can be worth $20,000.

But we don’t chop it down, and we will not. Because it is a tree that belongs to this continent that has already spent (possibly) one hundred years growing in that spot. I have not spent one hundred years doing anything consistently.

As for justifying the black walnut’s existence in our particular spot, I read recently in Peter Wohlleben’s wonderful The Hidden Life of Trees, that the same compound (Juglone - a natural herbicide) that prevents other plants from growing in its vicinity, is considered so unpleasant by mosquitoes that “Garden lovers are often advised to put a bench under a canopy of walnuts….where they will have the least chance of being bitten by mosquitoes.” He makes no mention of the danger of sitting on that bench in the autumn, when the drupes are hailing down. I have to admit that we are rarely afflicted by mosquitoes when dining on the back porch all summer long.


*I will make a point of referring to the black walnuts that populate my yard as black walnuts, to distinguish them from the walnuts you buy in the grocery store and put in brownies, or not, depending on your familial preferences, which are European walnuts, Juglans regia, also of the Juglandaceae family, but so much easier to open.

**Factoid: Black walnuts make up 10% of the diet of an eastern squirrel. That is true in many places, except my yard, where they make up at least 50%.


***Drupes are “ fleshy fruits with thin skin and a central stone containing the seed”
This word is so delightful, and so much fun to say aloud, that it almost reconciles me to the Assault of the Drupes. But no, it doesn’t really. Other excellent words related to drupes are: drupaceous, drupelets**** and indehiscent.


Posted by Christine Lehner at 4:01 PM No comments: