What can I say about the Christmas that is passed? (Just this one. Not all past.)
That I approached it with dread.
That for 24 days I opened the doors of the advent calendar with trepidation, dreading what would be revealed behind each snowy scene of family happiness: guilt, death, destroyed hopes, lost trust.
That it was the second Christmas without Jeff, the father of my children.
That it was the first Christmas since 2001 that did not require delicate negotiations over where the grown children would be for what celebrations.
That it was Iggy’s first Christmas and he discovered the bliss of a head massage while dressed as a candy cane.
That fake noses and fake teeth provided much needed amusement at Christmas dinner. There are few occasions that would not be enlivened by faux proboscii. Perhaps none.
That it did not snow and was in fact unseasonably warm for those of us not in Bethlehem, which is most of us. When it was 48˚ in Hastings it was 50˚ in Jerusalem. But it was not raining in Jerusalem.
That we received a moderate amount of bee-themed gifts and the ones we did receive were remarkably tasteful. The hands-down best was the bee bling-ring, which will soon be making appearances in select locations around the rivertowns. 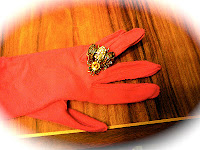 Ditto chicken-themed gifts.
That CSB slash Santa chose exceptionally well with this year’s stocking gifts. The ergonomic salad dressing delivery system was my favorite. There was also an IOU for an ergonomic egg poacher.
That Leda discovered her vocation is to be an angel in the Christmas pageant, so long as she gets to wear that marvelous wide belt made of silver sequins.
That it is over.
Posted by Christine Lehner at 6:09 PM 1 comment:

The Hands of Hartford, and occasional other body parts 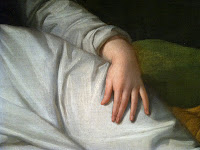 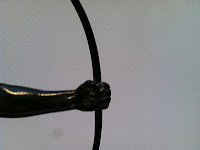 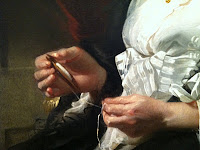 Posted by Christine Lehner at 3:52 PM No comments:

Waxing Rhapsodic re the Wood Chipper

What can I say about a wood chipper that hasn’t been said before?
They are quiet? I could say that but it would not be true.
Midday through our day of wood chipping I slipped out for a visit to our chiropractor where we discussed the merits of wood chipping, determining that the only thing that could improve the wood chipping experience would be if the machines were silent. That said, our chiropractor pointed out that for certain people (men, boys, half the human race?) one of the pleasures of heavy machinery is the noise factor. Think of ATV’s, motorcycles and anything with its muffler removed. We do wear earplugs when we employ the wood chipper, but they can only do so much and mostly what I cannot hear is anything CSB says to me, such as, Watch out for the huge branch coming your way.
The wood chipper we rented is made by Vermeer, a heavy machinery company named for the Flemish painter of exquisite – and quiet – luminous 17th century interiors. Even when he paints a music lesson, we feel certain that the notes played were soft and that no-one’s eardrums were assaulted. 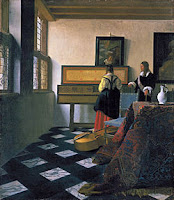 And then there are the simple pleasures wood chipping: feeding the tree limbs into the hopper; pushing them towards the maw of the grinders (which are very similar to the molinos in a sugar mill, except they do not squeeze out sugar juice); watching the inexorable crushing and shredding of the woody pulp between the grinders; standing back to admire the arc of the finely chipped wood spew from the chute.
I will not mention CSB’s tired and aching limbs the following day.
A few facts to astound friends at your next party:
1. The wood chipper was invented in Germany in 1884 by Peter Jensen, who may or may not be related to the silversmith George Jensen who designed what I think are the loveliest cutlery patterns. Probably not, because Georg was Danish.
2. Between 1992 and 2005 there were 33 deaths by wood chipper in the USA. That statistic does not include the 2007 death of a Los Angeles man. As with the struggle of St Christina of Stommeln against the Devil, the details of death by wood chipper are “of so repulsive a nature that no particulars of it can be given here.”

And then there is the satisfaction of woods that look like woods and not a tornado zone.
Posted by Christine Lehner at 10:07 AM 2 comments:

I must be blessed with agreeable men. Sometimes. Well, two of them last week in Chicago in not dissimilar ways.
It was a chilly day in Chicago. Even CSB saw the wisdom of wearing a hat. But we had no hats. It was so raw and chilly that on our walk north from Number One Son’s residence, we ducked into a Walgreen’s and acquired two faux fur, faux wool, faux hats with faux ear flaps and dangling strings, presumably to tie the ear flaps under one’s chin, but in truth their only function is decorative & I use that word generously. They were not expensive but I feel confident that whatever we paid for them was larger than the cost of producing them by a factor of at least 50. Luckily there were no mirrors in that particular Walgreen’s, so we were spared the reflection of ourselves in these faux hats, which because of their rather special shape had room for a family of ferrets between the top of my head and the top of the hat. But they kept our heads and ears, all four of them, warm.
Having acquired the hats we comfortably admired several architectural wonders of Chicago, and walked past a newly opened museum: The Loyola U. Museum of Art, so new that it was not listed in my 4 year-old guidebook. And on the sandwich board outside the LUMA (nice acronym, doncha think?) was an announcement that their current exhibit featured crèches. Yes, an entire exhibit devoted to those adorable nativity scenes, of which I have several and CSB has seen more in our time together than he thought necessary for several lifetimes. Even so, he agreeably agreed to go inside. Noting the admission fee, he agreeably volunteered to sit in the lobby with the newspaper while I viewed the crèches. His thoughtfulness so impressed the ticket-seller that she said she would waive the admission fee for both of us, because she couldn’t bear the idea that he would be unable to accompany me to see the crèches. CSB demurred. But the ticket-seller would not be denied. She said she would not feel right if he could not accompany me to see the crèches just beyond the double doors, and he had not the heart to tell her just how much he would prefer to sit quietly n the lobby and read about the depravity of British tabloids.
But here is the good part, while I viewed the crèches and counted how many shepherds the Italian ones had relative to the Philippine ones, and noted the llamas in the Peruvian retable crèches made of potato flour, and admired the iguanas made of tortillas in the Mexican crèches, CSB went upstairs to the permanent collection of LUMA and found this lovely house altar containing the relic of a Saint Christina, but which Saint Christina?
The tag→

refers to Christina of Tyre and Christina of Bolsena, who were probably conflated in some way, given that they share a remarkable litany of tortures on their way to martyrdom: They both survived burning at the stake; having their breasts cut off (milk then flowed); having their tongues cut out (they kept preaching); and drowning (rescued by Michael the Archangel). The end came with an arrow through the heart. Could that all be coincidence? The third Christina referred to is of course Christina the Astonishing, a favorite with hipsters and now diagnosed as an epileptic. But there are other possibilities, such as Christina of Markgate (d.1160) who was forced into marriage but then refused to consummate the union; she later managed to fulfill her dream and became a nun and embroidered pointy hats for bishops. 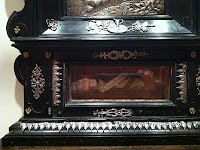 And for this great find, I am grateful to CSB.
Next I will tell you of the agreeableness of Number One Son when we spent a full two hours touring the Clarke and Glessner Houses in the Prairie Historical District.
Posted by Christine Lehner at 11:39 AM 1 comment: