Overheard as I departed the local swimming pool

I recalled this exchange yesterday morning when I was stung by a yellowjacket (just above what I judge to be the navicular tarsal bone. Thanks for asking.)and in the interests of discovering exactly how much pain I was in, I consulted the Schmidt Sting Index, where I learned that the pain of a yellowjacket's sting is comparable to "W.C. Fields extinguishing a cigar on your tongue."

What did those adorable children know?

Posted by Christine Lehner at 9:12 AM No comments:

How to find a car and what to do then

Because it is summer time and one of the great pleasures of summer is pink wine, I went to Stew’s Wine Shop to get some cases of this year’s vin d’été .
Each year’s vin d’été is chosen by the following scientific method: sometime in early June I buy a selection of this year’s crop of vins de Provence priced under $11, and test them. This involves inviting friends over and then drinking lots of pink wine. If we also eat bread and cheese and fried zucchini blossoms, that is a good idea. Then I buy several cases of the favorite. Sometime I have two favorites at the beginning of the summer, but by the end of the summer it will be whittled down to one. Without fail.) 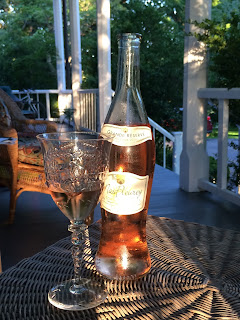 I got just a little carried away in Stew’s Wine Shop, so when the time came to push my cart out to the parking lot, it was remarkably heavy and unwieldy. Luckily a young man with a charming gap-tooth smile and a rather apt port wine stain at the corner of his left eye volunteered to help. (His nametag read: I am Grover. How can I help?)
Together we walked out to the parking lot. I couldn’t see my car anywhere. Not in the row where I recalled parking. Nowhere. There are certain triggers to Alzheimer’s Onset Anxiety: forgetting the word for the weird fruit bush that CSB fell into when they lived in Georgia (scuppernongs), or forgetting the name of the reservoir upstate that flooded my friend’s ancestral home (Ashokan), or losing my car in a parking lot. More or less everything makes me worry about the onset of Alzheimer’s, which is a problem for CSB who would rather undergo knee surgery sans anesthesia than ever hear the word Alzheimer’s again. (But he doesn’t have a choice, either way.) So there I was in the Stew’s parking lot, getting a little diaphoretic, imagining the kind of things the helpful Grover would be thinking about this woman in turquoise Birkenstocks with a shopping cart full of Mas Fleury, Cotes de Provence, who couldn’t find her own car in the parking lot. Things like: when did they let her out of Milledgeville?
Then I remembered that I had not driven my own car to Stew’s. My car was getting an oil change at the service station, so I was using one of my nephew’s cars. Two of my ten nephews live in NYC and own Subaru station wagons of varying vintages. They both park their cars in my driveway because that is much cheaper than paying to park in a lot, or parking on the street and getting lots of tickets; and since they don’t use their cars for months at a time, my driveway has become their home away from home. One has New Hampshire license plates (LIVE FREE OR DIE), and one has Maine (VACATIONLAND) license plates. That is how I tell them apart, the cars, not the nephews. Once I realized that I was not looking for a red Subaru, but a greyish Subaru declaring its willingness to die, I felt much better, and in no time at all we arrived at the car. I popped open the trunk, and Grover stood at the ready.
We both realized rather quickly that there was no room for even a single case of wine in the trunk, because it was full of extra large fire extinguishers. (There were also coils of rope, axes and a life buoy, but those could have been consolidated enough to allow for wine storage.) 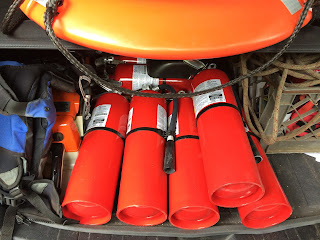 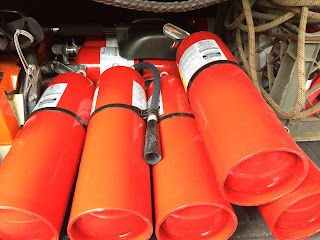 From the looks of them these were brand new fire extinguishers. I actually knew, or suspected what these fire extinguishers were for and why they were there, but just then that did not seem to be my dilemma. What seemed most important just then was to act as if I knew those fire extinguishers had been there all along and I had just momentarily forgotten about them. I worried that if I acted startled to see them taking up the space I had planned to fill with cases of pink wine, coupled with my previous difficulty in finding the car, that Grover might then begin to think this wasn’t my car at all; he might suspect that in addition to being a pink-wino, I was a car thief. Or if he didn’t think that, he would suspect me of engaging in some sort of arson-related activities, but being so cluelessly focused on procuring my pink wine that I had forgotten my car was full of the tools of my trade. Whatever that might be.
“Of course we can’t put the wine back here! We’ll put it in the back seat.”
I opened the back door. Grover inserted the several cases of wine. I considered offering him a free fire extinguisher for his trouble, but decided against it.
The fire extinguisher fun didn’t stop there. That evening, the nephew whose car it was took the train up from the city in order to retrieve his vehicle and drive up to the north woods. Apparently he too had forgotten about the presence of fire extinguishers in the back of his car (LIVE FREE OR DIE). Or so I gathered from the look on his face when he opened the rear door and discovered that there was no room for his ‘gear’. He then conceived of the plan to remove all the fire extinguishers from the back of his car (LIVE FREE OR DIE) and temporarily lodge them in the back of his cousin’s car (VACATIONLAND). He set about performing this translation, and in the process ignited, or activated, or set off one of the extinguishers. Suddenly, the back of his car was filled with pressurized nitrogen, in a white powdery form that would have extinguished a fire, had there been a fire in the back of his car. (LIVE FREE OR DIE). Being as there was no fire in the back of the death-seeking car, said nephew then spent a good part of the evening cleaning up the wasted nitrogen.

Has anyone found a piece of yellow paper? 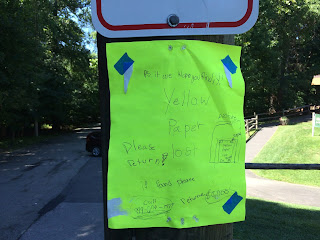 Posted by Christine Lehner at 10:36 AM No comments: