I’ve heard that there are people who buy a ticket, throw clean underwear in a suitcase, grab their passport and cellphone charger, lock the door, and head out to distant lands.
That sounds amazing.

Before leaving for Vietnam and Cambodia we did what I thought was everything we could do to obviate any domestic crises in our absence. (It’s true I could not guarantee Bruno would not die, but he was in fine fettle for one so ancient, and the vet is on speed dial.)

We suspended the newspapers, engaged our chicken sitters, and dog sitters; we bottled honey for the Whitney museum; we made lots of lists; we mixed the paint for the dining room ceiling and floor; I made schedules for my mother’s caregivers for the next month and prepared a three-ring binder with encyclopedic information regarding my mother and her needs. (My mother has since hidden that three-ring binder; hiding things remains something she does remarkably well.)We double checked my mother's furnace. I paid my outstanding parking tickets, and returned my overdue library books. I harvested all the butternut squash and made pesto with the nasturtium leaves. We completed and sent in our absentee ballots.
That was not enough.

Then we flew to Vietnam. After 15 hours we alit at the airport in Guangzhou (formerly known as Canton) where there are multitudes of stuffed pandas being sold, and only pandas. 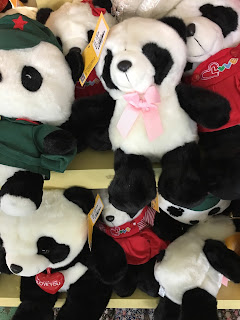 Then on to Hanoi.

I don’t know exactly what I imagined we would find in Hanoi: infinite variations on Ho Chi Minh’s beard? French-speaking Communists?
Not at all. For starters, we loved Hanoi. Or decided to love it once we learned how to cross the street. Never in my life have I seen so many motorbikes carrying so many people and animals and large articles unfit for transport by motorbike. We loved Ho Chi Minh’s collection of used cars. 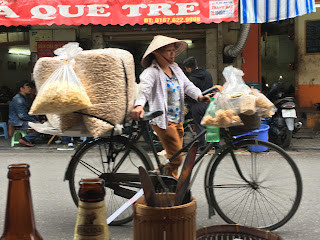 I probably cannot say enough good things about Vietnam: the people, the food, the landscape, the food, and yes, the food. 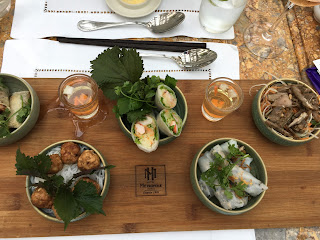 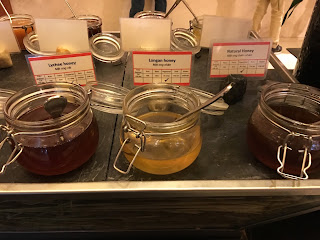 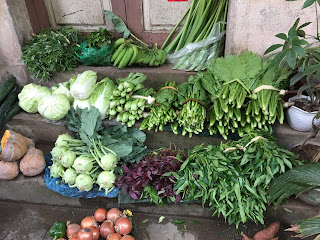 And all was going well. 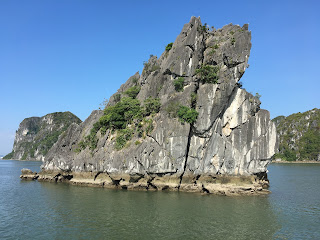 We visited Halong Bay; we did not swim in the South China sea off Danang because of all the tiny jellyfish washing ashore. 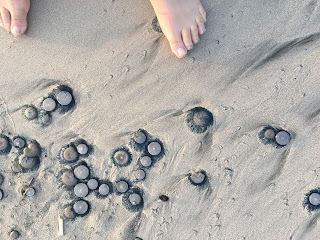 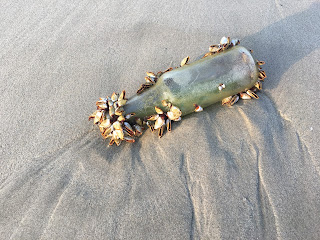 In the Hotel Saigon Morin, in Hue, the ancient capital, I saw a picture of Bon Papa, my grandfather, sitting in the lobby in 1939 smoking a cigar. I never knew him to smoke cigars. The next day was Tuesday November 8th in Vietnam, but still Monday the 7th in the USA. It stopped raining, so Hillary joined us in visiting the the tomb of Tự Đứ. 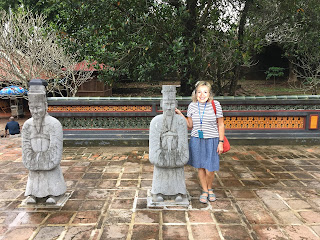 Tu Duc was a 19th century Nguyen emperor who, even with 100 wives, never managed to beget himself a son. For all the usual dysfunctional dynastic reasons, Tu Duc actually took up residence in his tomb complex while still alive. And he is buried somewhere else; no one knows where. All the workers who buried the king were beheaded to keep them from revealing the secret. Still, it is called his tomb. There is a lesson here.
The next day was Wednesday morning in Vietnam, and Tuesday afternoon in the USA, and as we took a bus from Saigon to the Mekong Delta, I was texting with my brother and sister about the election results. We were lighthearted. Texting from halfway across the world seemed remarkable of itself. Then something very creepy started to happen. After all those weeks of The New York Times telling us that Hillary’s chance of winning was somewhere in the 80th and 90th percentiles, Trump was now projected to win. I checked other websites because this just seemed too weird and disturbing. And the Wifi on the bus was spotty, so some websites were not loading very quickly, or at all; I fixated on the spinning colored ball, as if the intensity of my gaze could re-align the stars and fix this election.
You all know what happened.
By mid-morning a funeral silence had enveloped our bus, as if we’d been overtaken by volcanic ash.
By the time we arrived at Cần Thơ, known for its floating markets and Vietnam’s worst-ever engineering disaster, it was a ‘fact’ (yes, a bizarre word to use relation to a presidential campaign that had been fact-free, positively fact-allergic.) that Trump had won the electoral college and the world as we know it - the world as we hoped it might become – was no longer.
Drinking and lamentations ensued. I was overcome with shame.
In the days that followed, I felt compelled to apologize to every Vietnamese person we encountered. They had been so gracious, so forgiving, and this is what the Americans just perpetrated on the planet. Almost universally, the Vietnamese had more important things to do than worry about the emergence of Trumpistan: growing rice, raising silkworms, tuning up all-purpose motorbikes, reforesting the mountains, saving the depleted fisheries and making pho.

Posted by Christine Lehner at 4:12 PM No comments: