Notes on Riding Amtrak back from Boston

For the first half of the trip, until Old Saybrook, across the aisle was a white-haired older man (actually, he was probably my age; such is the disconnect between my perception of my own youth and other’s old age). As soon as we pulled out of Boston he took a pair of blue jeans from his knapsack and went forward to the rest room. He returned wearing the blue jeans, and then folded his trousers very neatly, aligning the creases with military exactitude. (I recalled Bonne Maman telling when her father was in the Belgian Cavalry father had learned to put his dress trousers under his mattress to keep them pressed.) Then he read the newspaper. After that he read on his kindle or nook or device of some kind.
In New London another older man with white hair (though this one had a mustache and glasses with black frames) got into the same seat. He heaved his duffle bag onto the overheard rack with some difficulty. He did not change his pants. But he took a small zippered kit out of his backpack; it was full of small vials with colorless liquid. He filled a hypodermic needle and injected himself in the belly. It looked to me that he stuck the needle right through his shirt but I couldn’t be sure, and I didn’t want to stare any more obviously than I already was. Then he read a novel by Agatha Christie for the rest of the trip. An actual paperback book.
Just before pulling into New Rochelle I discovered the SKY MALL catalog in the seat pocket in front of me. The SKY MALL catalog is one of the strangest and most mysterious catalogs I have ever encountered, because it is full of things that are completely and totally useless under any circumstances, and other things that might be useful, but why would you buy them while riding a plane or a train? Vying for the Most Useless and/or Bizarre Category were the Towl Hub Towel Holder with 4 USB ports, 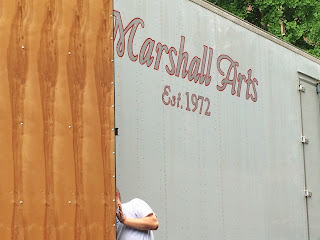 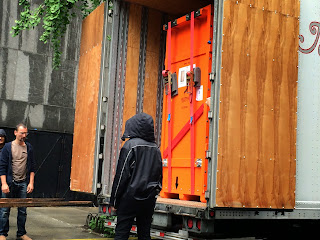 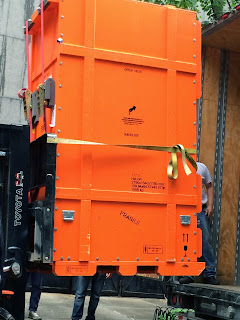 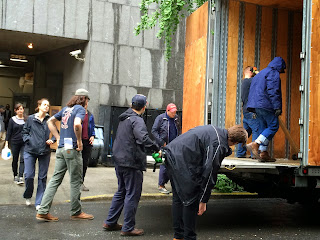 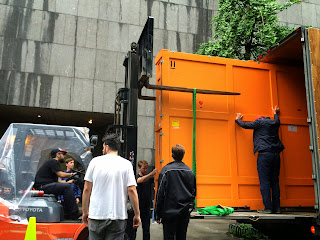 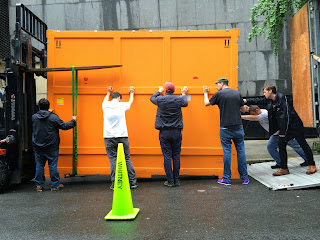 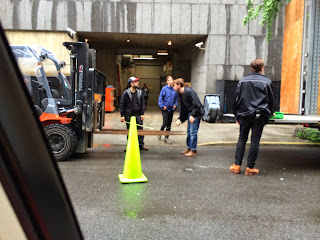 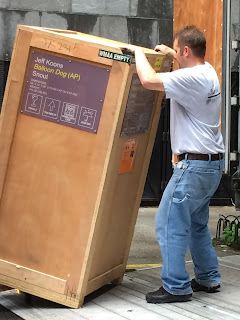 How many people does it take to unload a Jeff Koons in a bright orange crate at the Whitney loading dock?

Not needed was the beekeeper on the roof
Posted by Christine Lehner at 8:36 AM No comments:

Sort of about cemeteries


Because tomorrow I am going to a memorial service for man who died several months ago in his late 90’s, and was a Christian Scientist, and because I was taught many years ago (when I was related, though marriage, to several very devout Christian Scientists, one of whom regarded a lapsed Catholic, like myself, with pierced ears and a predilection for saints, as a barbarian) that Christians Scientists do not believe in death and hence do not have cemeteries, I have naturally been thinking about cemeteries.
I never understood what exactly was meant when CS’s said they did not believe in death. It seemed to be like saying you did not believe you had five fingers. Or a nose.
Tomorrow’s deceased was not, according to his daughter, a particularly devout Christian Scientist, though the soi-disant religion and its practitioners figured in his life in important ways.

As fond as I am of cemeteries I have always disliked our family’s cemetery. Because it is ugly – mostly -and flat. It is not “our” family’s cemetery in a proprietary sense. It is simply the local catholic cemetery where my grandparents, all four of them, and my father and his brother’s wife are all buried, and where my mother and uncle will be buried at some future time. It seems shameful and shallow to dislike the burial place of one’s few ancestors simply on the grounds of its pedestrian ugliness. But what other grounds could I have?
My mother, who is nothing if not an arbiter of architectural correctness and the landscaping principles of Capability Brown, has never spoken ill of the cemetery in question. She is actually quite proud of her father’s tombstone, a Coptic cross. Her father was not a Copt, and tombstones over six feet high are disallowed by the diocese of Boston. But my mother prevailed against the episcopal powers-that-were, and erected an 8-foot high Coptic cross for her Belgian father’s tombstone. Long after she has forgotten the names of her grandchildren, my mother will gleefully recall her victory over the graveyard guidelines of the diocese of Boston. 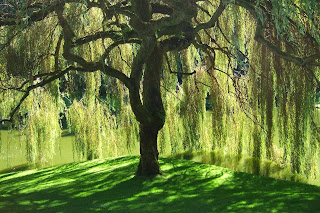 My real fondness for cemeteries presumably began when I was at Milton Academy Girls School. Across the street was the Milton Cemetery, beautiful, undulating, and forested in parts, with a pond, Gothiccrypts, and aged fieldstones. We would sneak over there to smoke cigarettes and recite Coleridge, leaning against purple slate gravestones carved with luxurious weeping willows and winged cherubs.
Nowadays, at least once a year we stop by, or maybe only wave to, the graves of CSB’s great-grandparents, in the tiny cemetery in Bingham, Maine, on the shores of the Kennebec River where once massive logs floated down to Skowhegan.
In Duxbury, Massachusetts there is a classic old New England graveyard, where Jeff and I used to make rubbings of pithy epitaphs. I was pregnant with my first child, and it seemed to me then that half the graves belonged to young women who had died in childbirth, and the other half memorialized their infant children. Yet I kept going back there. Jeff’s memorial service was held in the adjacent Unitarian church in Duxbury, but he is not buried there, or anywhere.

Jeff and I never owned a plot in a graveyard anywhere. Neither have CSB and I pre-invested in a final resting place. Throw us to the winds.

One cold night this past January my friend Lis and I went outside to get into the car and drive to JFK. But there on the lawn in front of the house was a strange white van. On the grass. A man climbed out of the van and walked in our direction. I shouted out: Who are you and what are you doing here? Initially he could not speak coherently at all. I went inside to call the local police. Ten minutes later the local police had still not arrived. I called again. (We would learn later that the officer dispatched went to wrong address and finding no one home, returned to the station and did nothing. Yes, not reassuring.) Meanwhile, the van’s driver was wandering around the front lawn making plaintive noises, and insisting that he was not drunk.
Finally a young policeman arrived, and seemed quite relieved when he saw the van and the wandering man. He knew them both. He told us his name. The wandering man and his brother, descended from Italian stonecutters, own the local gravestone business. I had driven past their stone yard hundreds, maybe even thousands, of times on my way to the Cooperative Nursery School with the friendly dinosaur logo, sometime last century.
Finally, Lis and I headed to JFK to fetch the weary traveler. We were giddy. On the Major Deegan we were laughing uproariously because we thought the funniest thing imaginable was that this nighttime intruder who could not walk straight was in fact a carver of gravestones.
No one else seems to think this convergence of details is remotely funny. I still like to visit beautiful cemeteries.


Posted by Christine Lehner at 4:46 PM No comments: