The story I heard was this: my parents arrived in Havana sometime in the mid- fifties, and handed over their passports to the Cuban immigration authorities, and that was the first realization that my mother was 4 years old, had blonde hair, blue eyes and was 2 feet 6 inches feet tall. (My eyes are actually, currently, green) 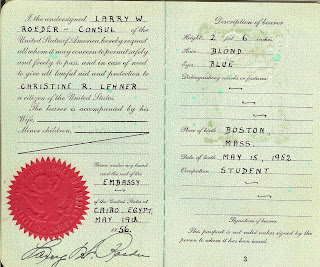 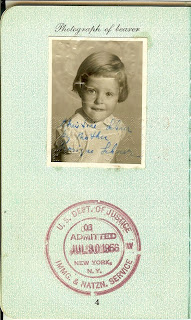 She had picked up the wrong passport on her way out the door (in snowy Hingham, leaving behind her three children), and now she was in Cuba pretending to be her daughter.
That is all I ever heard. I assume my parents came to some satisfactory arrangement with the immigration officials, because they proceeded to enter Cuba. 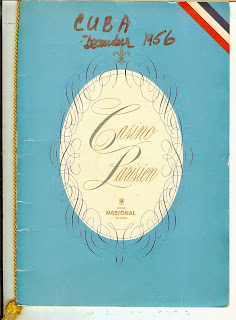 I tried to verify this story, or my memory of the story, but my mother has no memory of ever going to Cuba, with or without my passport.
Which of us is most culpable of failing the narrative: Me for possibly making it all up? She for not retaining the memory?
One thing I feel certain about: They did go to Cuba, and not only did they go to Cuba in 1956, but – according to the paper trail - they did several things we did not do: they basked on the sunny beach of Varadero, 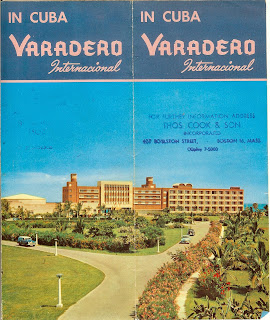 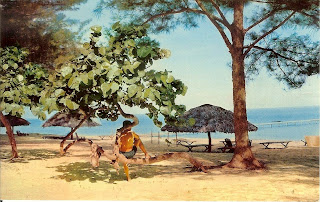 they saw the wildly funny De Castro Sisters* perform, and then they attended Sunday mass at the parish church of Santo Angelo Custodio. 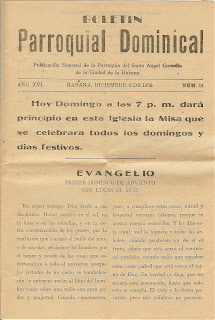 It was, after all, the first Sunday of Advent.
I know all this because there is an enormous cupboard in the parental basement containing the relics of my parents travels. The drawers are labeled: Europe, South and Central America (Cuba was in this drawer), Asia, Africa. And inside each drawer are manila envelopes labeled with the country visited and a date. My mother’s organization will outlive her memory. 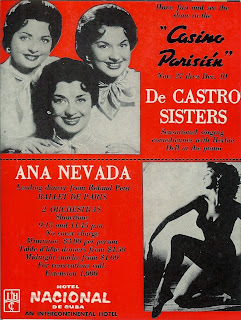 *Three singing sisters, Peggy, Cherie and Babette: they were raised in a Havana mansion that is now home to the Chinese embassy. Their mother, Babette, was a Zeigfield Follies showgirl, and their father, Juan Fernandez, owned a sugar plantation, Radio and TV stations in Cuba, and was planning with Batista to build a canal through Cuba. In 1954 the De Castro Sisters performed at the Desert Inn with Noel Coward when he made his Las Vegas debut, and in 1956 they performed at the Casino Parisién for my parents.

Some Blue in Cuba

As Americans we are not meant to go to Cuba in order to bask on the beach, frolic in the waves, get sunburned, get sand between our toes and drink mojitos.
Only Canadians and Germans get to do that.
As Americans we went to Cuba to see Art and Architecture, of which we saw a lot. 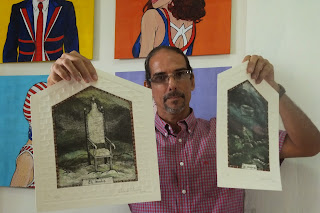 Serendipitously, the art studio of Norberto and Jannette was nearby a beach, so we went there for lunch and the possibility of plunging into the warm Caribbean waves. 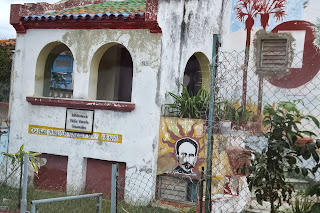 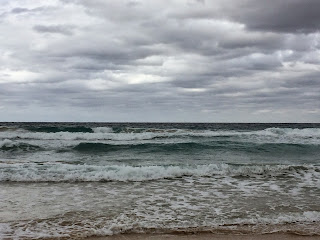 It was a sirenic possibility, until we saw the Portuguese men o’war. 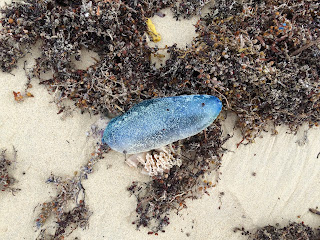 These bluebottles are marine cnidarians, and though I have always thought otherwise, they are not jellyfish, but siphonophores. 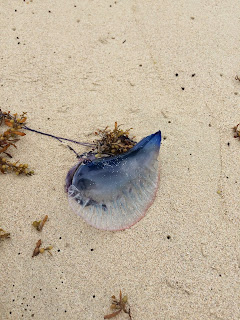 Their gas-filled bladders – pneumatophores [I am loving this vocabulary] - are bright blue and tempting. My impulse –thankfully thwarted - was to pick one up, pop its distended bladder and bring home the deflated blue sac to show my grandchildren. That would have been a terrible idea, as their venom can remain potent for hours and even days after the dead creatures have washed up on this lovely tropical beach. And then I would have suffered an extremely painful dermatitis, caused by contact with urticariogenic tentacles; and possibly even developed a fever, shock and then died.
I did not touch the bluebottles, or only once, and very slightly.
We didn’t go swimming either, because lots of Portuguese men o’war washed up on a beach indicate even more Portuguese men o’war are in the water, floating this way and that, along with the winds, currents and tides. 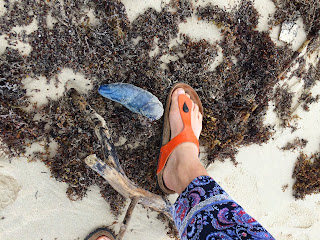 (Not my foot, but a good one for scale, and of course the colors are lovely.)
Posted by Christine Lehner at 9:59 AM No comments:

Cuban Cars, the Antidote to Auto-Agnosia

One of the many things I worry about is my inability to identify cars. I lie awake fretting that I might one day witness a crime (A heist, a gangland shooting, money laundering) and actually see the culprits escape in a getaway car, and then be completely unable to identify the getaway car. I would be the one witness to this crime and I would be unable to help solve it, unable to help justice be done, and unable to bring the perpetrators to justice. I would fail my fellow citizens, and all because I don’t know cars. Other than red from green, and sedan from station wagon, I cannot distinguish models or makes. I am hopeless. I suffer from auto-agnosia.* 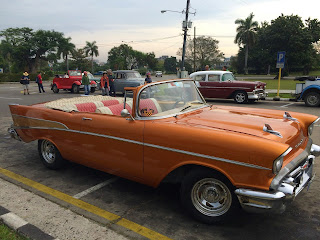 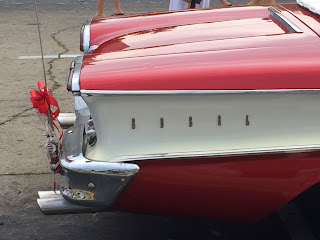 But in Cuba, even I could tell that the cars are very old and American. And the ones that were not very old and American, were also old but made in Russian or Bulgaria.We won't go there. In Cuba, I made a point of trying to read the logos and hence distinguish a Buick from a Chevrolet from an Edsel, because in Cuba, that seemed like an important thing to do.
Also in Cuba, the cars came in wonderful colors, real colors, not the pathetic excuses for colors (the muted maroon, the muted forest green, the shabby grey) that inhabit the highways and parking lots of New York. 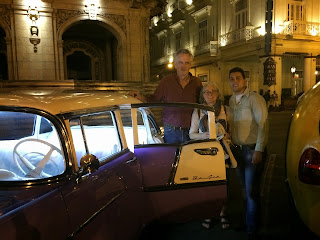 In Cuba I thought about cars more than I have thought about cars in the entirely of my life outside of Cuba. I thought about riding in cars that were manufactured when I was in kindergarten. I thought about breathing the fumes of these cars that date back to the Middle Ages. I noticed that a certain Eastern European car has a logo that is deceptively like the BMW logo, and do we think they did that on purpose?
We wondered what would happen to all these antediluvian cars when “normalization” comes to pass? I wondered if someone in Cuba would like to acquire CSB’s 1947 Chevy truck that resides, inert, in the back field.

* I am basing this word, which absolutely should be a word, on prosopagnosia or face blindness, from the Greek for face, “prosopon” and for not knowing,”agnosia” 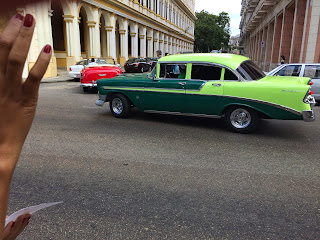 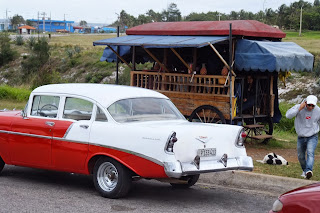 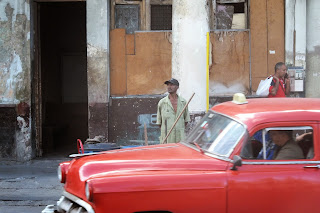 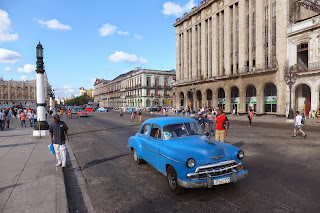 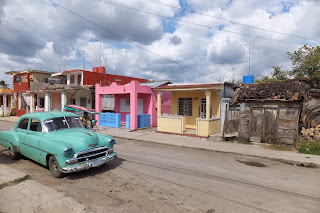 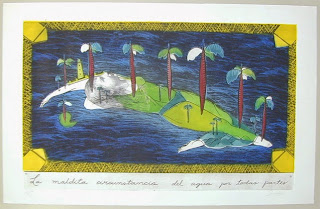 *
The first known inhabitants of Cuba, the Taino, settled the Cuban archipelago around 700 AD, while the Chinese were combining saltpeter and carbon and sulfur to invent gunpowder, and while Pepin the Short was ruling the Franks.
The Taino were skilled farmers, potters and weavers. Alas, their weaving was so accomplished that the conquistadores later forced them to weave sails for their caravels.
On October 27, 1492, Columbus espied Cuba and thought it was Japan; he called this place “the most beautiful land that eyes ever beheld”.
When the Europeans arrived, there were about 300,000 indigenous people living in Cuba. Then came the Spanish, forced labor, smallpox, measles and typhus; all that remain of the Taino are a few shards and these words: Canoe, hammock, hurricane and tobacco.
(Still, I consider that to have left the world greater by the addition of words is not a negligible legacy. Words of any kind, words that are powerful, words that name powerful weather, words that evoke siestas, words for crops, words for modes of transportation, these are always worth having.)
Also, according to the Internet (”We are still here”) descendants of the Taino are alive and well and living in Brooklyn.

The first name for Havana was San Cristobal de Havana, and Saint Christopher was named its patron saint. In 1969 St Christopher was de-listed form the Catholic liturgical calendar, his ‘cultus’ being deemed too fantastical and possibly even untrue. Given the otherwise bizarre standards for sainthood in the Catholic Church, this seems a harsh fate for the beloved patron saint of Havana and travelers. (My grandmother saw to it that I always had a St. Christopher medal in my car and tucked inside my suitcase when I traveled. The de-listing of the saint was for her a matter of indifference.)

Because we are Americans, we cannot just get on a plane and fly to Havana. We must go with a group that is licensed by the Office of Foreign Assets Control, and have a specified and educational raison d’être for the trip. We did. We traveled to Cuba to experience Art and Architecture with a group composed of Hampshire College alumni and parents (my favorite daughter went there) and assorted friends. If you know anything at all about Hampshire College, this should be a key piece of information. If not, imagine a group of people who went to Hampshire because they were disinclined to follow a traditional educational path; who preferred to create their own curriculum, follow their passions, re-invent the wheel, and inhabit coed dormitories. Creative souls, all.

We gathered at 4:45 am at the Miami airport, not a generally happy time for many creative souls. But CSB is generally awake at that hour, so he found the Dunkin' Donuts gathering place without difficulty. Meanwhile, all the Cubans on the flight were getting their enormous bags shrink-wrapped. The rational for shrink-wrapping luggage became the dominant topic of inquiry all morning, long after it was exhausted as a topic. (E.g. What happens to all that shrink wrap once it gets to Cuba and is removed?) 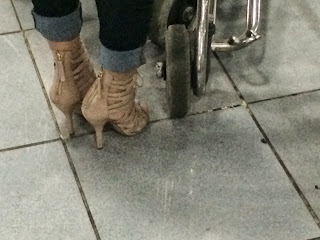 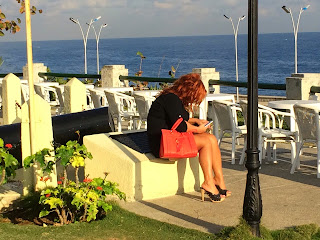 Cuban women are known to be lovely, but I had no idea that they were also deeply attached to high heels, vertiginously high heels. I watched Cuban woman sprint across cobblestoned streets in high heels, faster than I can run in my trusty and practical Birkenstocks. 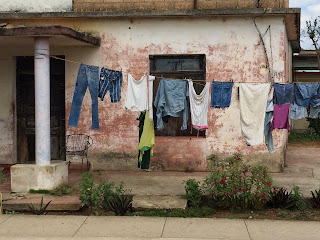 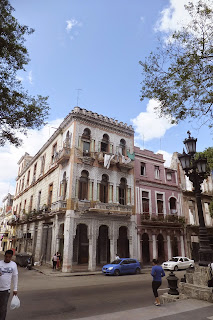 Laundry in the countryside and in Havana.
* The Damned Circumstances of Water, by Sandra Ramos. (At MOMA and elsewhere)
Posted by Christine Lehner at 6:47 PM 1 comment: