New Words for Your Mental Health, or, Skeuomorphic thixotropism leads to lordotic wordplay

I would be lying if I said I had been feeling rosy of late. But sometimes small things – new words - can make big differences, and it is hard to feel like complete failure, wretch, loser, and ne’er do well, when through no effort of your own, you manage to learn of 4 – count ‘em – four new words.
That’s how many new words I learned last week. (Nothing compared to the 400+ new words my three-year-old grandson learned, but then his brain is oh so much more plastic than mine.) They may not all be new to you. Maybe they are all old hat to you. To me, they are spring chickens, and frankly, much more appealing than the forty spring chickens out in the coop gorging themselves on organic artisanal baby chick feed.

The first word is lordotic, and it is the only one whose provenance I don’t recall. Wherever it was, lordotic was used to describe a character’s less than stellar physique, and now I understand way. “Lordosis is the inward curvature of a portion of the lumbar and cervical vertebral column.” So to say someone is lordotic means that person has a swayback. From the side view: concave in back, convex in front. The word is often used about horses; equine hyperlordosis is called a saddleback. But I rarely refer to horses.

Thixotropic comes courtesy of Eva Crane. In case you missed her obituary in 2007, Eva Crane is one of the great beekeepers and compilers of bee and honey wisdom. Starting with a wedding gift of a single hive – to supplement their wartime sugar ration – this PhD in physics went on to compile everything known about the history of bees and beekeeping. I use the word everything here in its most literal sense: from the ancient Egyptian beekeeping practices to a medieval codex forecasting the honey harvest to the chemical composition of honey to the exact differences in trace mineral content in honeys made from different flowers to every naturalist and scientist who ever studied bees and what they learned. It was in discussing the viscous properties of honey that I learned of thixotropism. As with so many of my favorite words, this one comes from the Greek: thiksis meaning touching, and tropos meaning turning. Heather (Erica) honey is thixotropic. 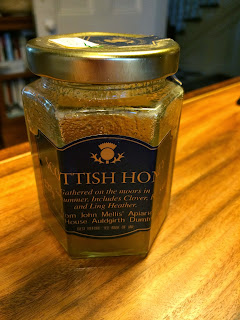 Under static conditions it is fairly thick or solid (I can personally vouch for this), when agitated it becomes fluid and flows easily. This is not true of all naturally thick honeys (pine, honeydew) but you will have to study a lot more of Eva Crane to understand why. Other thixotropic things in nature are clay, synovial fluid and semen. That explains so much.

Meuse…this one was elusive. I heard the word from my Virginia host Sarah’s friend, Sally. She defined it as the imprint of an animal, especially a hare, in the tall grass. I knew exactly what she meant – or thought I did – because come spring when our field grows back the deer will reenter and make their beds. Walking in the field we always find smoothed down spaces of crushed grasses where they slept. The shape of slumber. Like the imprint of CSB’s head on the pillow, minus the deer ticks.
So I understood; but further clarification of meuse proved elusive…a slippery slithering creature in the tall grasses.
There was no meuse in Wiki, the Britannica or the American dictionary. Then at last I was rewarded by the delicious heft of the 13 volumes of the OED. There it was: [from the Old French: muce, musse, mouce, muche..hiding place, hole in a bed]1. An opening or a gap in a fence or hedge through which game, esp. hares, habitually pass and through which they run, for ‘relief’. B. trans. And fig. a loophole or means of escape; a device for, or way of, getting out of a difficulty.
2. The ‘form’ of a hare.

Oddly though, the OED does not include thixotropic or skeuomorph. Yet another reason for multiple references books. Only Eva Crane can be complete, so it seems.

I discovered skeuomorph - a “derivative object that retains ornamental design cues from structures that were necessary in the original” - in a paper by the renowned Welsh hagiographer Tristan Gray Hulse about St Diheuyr ap Hawstylr Gloff. Even though the paper is written in English, at least one third of the words and one hundred percent of the proper nouns are in Welsh, which make for a lot of consonants in unusual combinations. Yet there was skeuomorphic, clearly not Welsh: “some of these [stone houses] suggest a possible skeuomorphic recreation of small reliquaries in wood and metal.” I knew just what he meant, but not really.
Given that almost all the examples of skeuomorphs I found referred to computer or technical objects designed to resemble their analog antecedents, it seems remarkable that the word came to me via a reliquary resembling a pre-Christian stone structure. 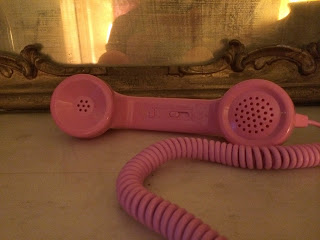 And as a lagniappe, I wandered in to the next room and realized that there was my own skeuomorph: previously referred to as my pink neo-Princess iPhone attachment. (Thank you Pat.)