A few items from the Aged P Archives

Whenever I am back at my mother’s house, my childhood home, also my father’s childhood home, I try to help my mother clean out the attic and basement, closets and cabinets. It is tedious work and requires frequent hand washing and sinus-clearing. But it is not without serendipity. Among the rooms full of old guidebooks, the half-ton of old opera 78’s, the collection of “Empty wine bottles with good memories”, one can find picture that call to mind half-remembered stories, and pictures that rise more questions than they answer.

In the back of my father’s closet was this: A half-filled photograph album, of a kind we will never see again, the pages are thick black paper and the pictures are neatly slotted within four golden picture corners, and the captions are written in white ink.
This particular album appears to chronicle a few early business trips, and the portion of his honeymoon that was business as well.

The very first picture is of my newlywed parents (note the popularity of plaids and tartans) and the Kohler family in Germany. 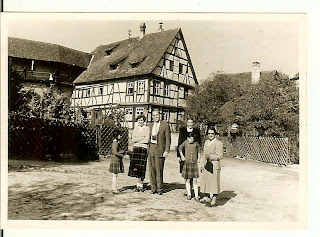 The two young girls are Bine (Christine) Kohler and her sister Renata. Their father, Herr Kohler, was a textile man and often came to the States to do business with my grandfather and father. We knew him as Hair Curler. Many years later Bine stayed with us for almost a year, and become one of my dearest friends;she still is. Many years after that I was visiting with her in Frankfurt and watched her daughter Anna bicycling off to school, wearing her uniform - a plaid skirt.

Later that same year my father traveled to Japan for business. Presumably my mother was home on Charles Street, pregnant with their first child. How did she occupy her days while her new husband concluded textile business in Osaka?
A letter glued into the album next to the picture reads:
“Having just received, after undue delay, a picture taken together on the day of your arrival here, I hasten to enclose it herewith for your consolation. Can you remember the name of the colossal rock-like fellow in the front line? He is called “NAYORAIWA” – being the combination of two nouns: “Nayoro” and “Iwa” – named after his native town’s name “Nayoro” plus the latter, meaning “rock”.”
[Nothing about the name of the lovely young lady seated next to my father.]


Posted by Christine Lehner at 9:32 AM No comments: