My mother and Moby Dick 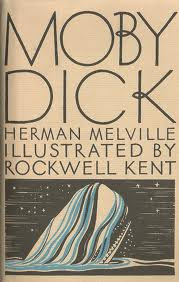 Here is something I need to remember for future reference: my mother does not like Moby Dick as much as I do. The truth: she pretty much hated every minute reading Moby Dick for her class at Harvard. What she had to say about the pleasures of cetological lore does not exist. What she disliked about whale minutiae and viscera would fill the brain of a sperm whale to capacity. (And yes, the sperm whale brain, at 17 pounds, is five times larger than the human brain and has a volume of 8000 cubic meters.)

The only good thing about Moby Dick, as far as my mother is concerned, so far as I can tell, is the fact that the Pequod’s first mate’s name is Starbuck, he of “deep natural reverence [and] wild watery loneliness”, and this means that every time she passes a Starbucks coffee shop she can allude to this convergence of names, each time as if for the first time. Given that there are 13,279 Starbucks in the USA alone, this is an opportunity unlikely to expire. (The founders initially wanted to name their company Pequod, which I would have voted for; this gives you an idea of my business savvy.)

I, on the other hand, consider Moby Dick to be the greatest American novel and one of the funniest novels ever; the novel that keeps on giving. I like Moby Dick so much that I wrote a short story about a character who may or may not resemble the writer, who is obsessed with Moby Dick and spends an entire summer - a summer rife with dramatic life changes – alluding to Melvillian wit and wisdom. (You can read this story, “No I am not a Loose Fish, and Neither Are You”, in the 2006 issue of the Southwest Review,Volume 91,Number 3, which, alas, is not available on line.)

My mother likes to give lectures and generally prefers to be around very few people, for short periods of time. Some people she would prefer to never be around.

In the decade before he died Dad enrolled at HILR, Harvard Institute for Learning in Retirement, which allowed him to take classes about current events, environmental degradation, Shakespeare’s plays and modern novels, and be around people. A good day at HILR involved a class discussion on Islam and Petroleum, lunch with an attractive female grandchild and her attractive roommates, then an afternoon class tracing the causes of Climate Change to the Protestant Reformation. He once took a course called the “Traditions of Mysticism and Christianity and Islam” and called me once a week to explain the reading and, please, to write a précis of the 800 page tome assigned that week. But he kept going to class. Only a national emergency or death could stop him from going to class and lunching with an attractive granddaughter.

The only course he actively resisted taking was “This is Your life: Memoir Writing”, and it was the one course above all others I begged him to take.

But for all their love and devotion, my parents were apparently clueless about each other’s social preferences. Which explains why my father persuaded, urged, hectored and implored my mother to join him in taking classes at HILR. Naturally he wanted her company – even though they wisely never took the same course. He also believed, or wanted to believe, that after his death - and he knew quite well he would predecease her, and soon - she would enjoy the classes and the collegiality of HILR. Even his children, their children, could have told you this was delusional.

Nowadays, my mother likes to tell people she took the Moby Dick class because Philip chose it, and she wanted to honor his choice. I don’t contradict her. But in fact she didn’t even look at the catalog until after his death. I know because I was there with her, and in the matter of taking classes, I am more like my father than my mother, so I was drooling over possibilities like the “Philosophy of Yoga”; “T.S. Eliot, Evelyn Waugh and Other Catholic Converts”; “Anti-Matter and Alexandrine Meter”; “The Last String Quartets of Beethoven”. You get the idea.
And so I must take responsibility slash blame for my mother signing up for Moby Dick, and “The Philosophy of Yoga”. (She dropped the P of Y after the second week.) But she stuck with Moby Dick, more or less. More, because she never actually dropped out. Less, because she never finished the book and so never got to Chapter LXXXIX on “Fast-Fish and Loose-Fish”, in which all of jurisprudence and human history is explained, brilliantly and hilariously, in the context of harpooned whales. 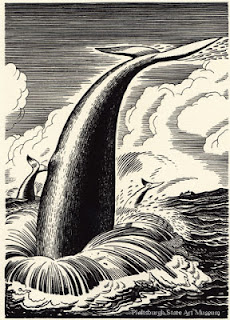 Something else I would do well to remember in the future: just because we have the same taste in chocolate and shoes does not mean that my mother and I will find the same books, or classes, interesting. Moby Dick could be the 63-ton tip of that iceberg.

Posted by Christine Lehner at 1:04 PM No comments: