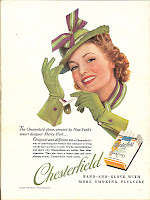 Yes I know smoking is bad for you, but it must be admitted that as a habit it engendered some rather clever and elegant accoutrements. Who would not like a pair of these gloves?
Posted by Christine Lehner at 8:43 AM 2 comments:

It seems like too classic a henhouse story. The fox swoops in and nabs the hen, then trots off gaily as the other hens cluck and squawk.
And we thought we had been so careful. Each evening around 4 pm we’ve put the dogs inside the house, in a room with no view of the backyard and henhouse, and then we’ve opened the gate so that all the chickens can roam free and pluck grubs and bugs from virgin grass and generally behave like animals in a farmyard. Then as it gets dark they head back to their cozy henhouse and gather for their nightcaps. We come in and count, and shut the door for the evening.
But not today. Around 4:30 I heard a squawking of a different tenor. It was agitated, staccato, and distressed. I dashed out the door and directly in front of me, just as perfect as an illustration from Aesop’s*, was a gorgeous red fox with Bump between his foxy jaws. Of all the chickens, why did it have to be poor Bump? She was our very first hatchling from the exotic eggs Anne Farrell gave us. We didn’t know what we were getting. She could have been anything and she was a Crevecoeur, all black and with a perfect Mohawk/Fro. She was the matriarch of them all.
And now, fox fodder.
Meanwhile all the chickens are back in the henhouse and we have counted them countless times to assure ourselves that it was only Bump we lost. Have you ever tried counting agitated chickens? It is challenging, but on the other hand I am glad that in my life I have on several occasions counted chickens, and I actually think I am getting better at it.
This is what the fox looked like: 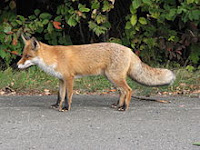 And this was Bump last fall, in her youth: 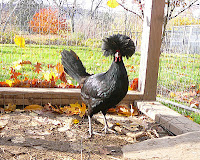 *As far as I recall, in Aesop's Fables you will find a fox and grapes, a fox and a crow, and a fox with a hedgehog, but nothing about a fox trotting off with a hen between his jaws. Why is this? My guess: there is no moral to the tale.
Posted by Christine Lehner at 5:19 PM 4 comments: 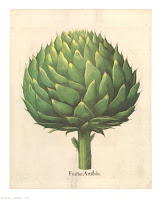 It has come to my attention that in 1832, when Darwin visited Argentina and Uruguay, he found hundreds of square miles of pampas overrun with feral artichokes. And he lamented this fact - pointing out that the feral artichoke precluded anything else from growing, say feral clover, or feral dahlias, or feral lavender.
Unlike our garden in Hastings.
A couple of years ago CSB noted that Jefferson had artichokes in his garden. In Virginia, 315 miles southwest of here. Not to mention an altogether different growing zone.
CSB loves artichokes and his father was a Virginian, two very good reasons for us to grow them here. He acquired heirloom Jeffersonian seeds and planted them. We got leaves but no artichokes. The next year he did some research, found seeds for northern artichokes and started them in February in a cold frame constructed with glass doors salvaged from a historic home that was being demolished in order to built a Pilates studio. The seedlings grew. In late spring he planted all fifty seedlings in our garden, in various places in the garden. He planted seedlings in several urns. They grew. V e r y s l o w l y. We harvested eleven artichokes this past summer. We savored them. We admired swaths of artichoke foliage with no fruit.
Darwin does not say if he ever ate any feral artichokes. How does a feral artichoke differ from a cultivated artichoke? Are its leaves sharper and pointier? Does its heart beat more savagely?


Today we celebrate the feast of Bd John Liccio. (1400-1511). After his mother died in childbirth his father fed the infant crushed pomegranate arils. Pomegranates are another plant not native to the Americas; they came from Persia and spread to the Mediterranean early enough to be an integral part of the Persephone myth; they were introduced to South America by Spanish settlers in the 18th century. I have yet to hear anything about feral pomegranates. As for John Liccio, the busybody neighbor objected to this diet for an infant. But John’s father persisted, and the saint went on to have a very long life full of miracles, such as curing people whose heads were crushed, and causing paralysis in the hand of a would-be thief. He lived for 111 years. 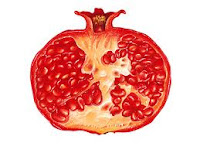 If the next time you see Cherished & Superlative-in-all-Ways Grandson and note how pink his cherubic infant lips are, perhaps that will be a result of pomegranate juice.
Posted by Christine Lehner at 12:24 PM No comments: 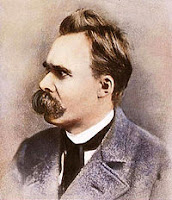 This is what I found in the used copy of Nietzsche's The Birth of Tragedy: a page torn from Bon Appetit with the recipes for two fruit smoothies. What can these simple instructions (Combine fruits; blend; serve) tell us about the dialectic of the Apollonian and the Dionysian? One smoothie combines berries (Black & blue) best grown in northern and temperate regions, while the other is a medley of tropical fruits: mango, pineapple and banana. Was the former reader/owner of this book thinking that, like the perfect Attic drama, the best smoothie would involve a flavored counterpoint between the warmth of the tropics and the chilly nights of the north? Or did the reader think that a diet with more fresh fruit might have kept poor Nietzsche from going mad on a street in Turin? (as far as I know he had tertiary syphilis, not scurvy, but fresh fruit can cure a myriad of ills.)

Yesterday was 11.11.11. Twice yesterday the time read 11.11. That is all I can tell you about that.
But I can tell you that it was the feast of St Theodore the Studite,a 9th century abbot who was significantly saner than many of his monastic confreres. He told his hermits: "Don't cultivate a self-satisfied austerity. Eat bread, drink wine occasionally, wear shoes, especially in winter, and take meat when you need it." Excellent advice in any century. Yet this admirable man had many run-ins with authority, both secular and religious. His iconoclastic bishop sent an officer to cut off Theodore's head, or at least cut out his tongue. But Theodore got a reprieve when Michael the Stammerer took over as Emperor. Theodore then wrote him a thank-you letter.
Posted by Christine Lehner at 12:48 PM No comments:

So Sunday being a beautiful autumnal day and not snowing, and it being the putative day of rest, and also being the feast of the remarkable and remarkably weird Blessed Christina of Stommeln*, CSB and I went to Wave Hill to see Hive Culture.
To be honest, CSB did not initially see the point of going to an art exhibit about bees when we have so many bees right here. He softened a little when faced with this lovely bee wallpaper, not that he gave much thought to actually wallpapering the powder room with it (my idea).

**
Nor did he think flowers sculpted from beeswax were the best use of beeswax, but I thought they were lovely in a cloying Victorian kind of way.

But our favorite by far was a video of a young woman dressed in a white sheath uncannily like a straitjacket who turns herself as a bee. This transformation includes spitting into an array of hexagonal jars while flapping her arms, and wending her way through a maze-like pattern of piled up fleece balls (pollen), moving them from pile to pile. It is true that I have, by popular demand, been known to perform the waggle dance, but this young woman took the concept and ran with it.
Why didn’t I think of this?

*Christina (1242-1312) lived in a village near Cologne in the 14th century. Clearly she was precocious, or something. At the age of 10 she announced that she was engaged to Jesus, and then she ran away to the convent where she experienced many hallucinations, including Satan disguised at St Bartholomew urging her to commit suicide. In her twenties she became friendly with a Dominican called Father Peter, and he was lucky enough to witness her being tossed around the room, pierced and stabbed, all by an invisible satanic presence. It is thanks to his excellent note-taking that we know the gruesome details of Christina’s holiness; Butler’s Live of the Saints is more squeamish: “But the manifestation of which Father Peter gives the most careful and detailed account was of so repulsive a nature that no particulars can of it can be given here.” Since Butler does feel comfortable relating how Christina found herself buried in a mud pit on one occasion and had hot stones attached to her body by Satan on another, I am afraid that for someone like me to read something like that is an invitation to imagine all sorts of kinky and disgusting torments.

**(Bee Wallpaper by Rob Keller, 2007) It wasn't until I got home and really stared at the bee wallpaper on the brochure that I realized what felt uncanny about it: my late, ex-husband, the late-lamented Jeff,being obsessive about many things, went through a period of obsessively digitally multiplying photographic images to produce patterns similar to this bee wallpaper. Being vociferously anti-Catholic, one of his stranger images featured a stained glass Jesus Christ kaleidoscopically repeated. It was very colorful.
Posted by Christine Lehner at 9:45 AM No comments: