I walked across the yard, past the squawking chickens, to visit with my mother in her Little Red House. She was lounging on the screened porch with Shedley. Mom told me that she had brought all this lovely wicker furniture with her from the Orchard."It was there. That's where it was. Over there." She gestured towards the long bench against the clapboard. "Except this. I don't know where this came from."
Then she dashed off to get something she wanted to give me (she frequently has items for me: mail she doesn’t understand, gifts I gave her years ago, random pieces of paper) and returned with a copy of What to Wear to See the Pope. The hardback, with the cover photo I never liked and the title in all lower case letters, which I also never liked. 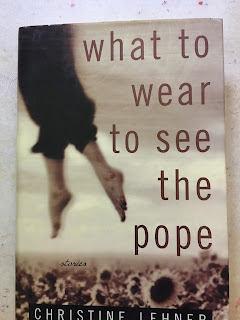 Mom said, “I thought you should have this. It has something to do with you.”
“I wrote it.”
Shedley was trying not to laugh. "I told her that. I showed her your name."
I almost said, Don't you remember. A collection of short stories? Some of them even funny. With a character based on a certain Belgian mother.
“Well, there it is," Mom said.
“Thanks Mom,” I said.
“Have you ever seen this before?”
“I wrote it, Mom.”
I thought about saying, Don't you remember? You came to a couple of readings. You liked it, at the time. But I didn't say that. My mother remembers so little, and certainly not my short stories. There would be no point.
“So have you seen it? I thought you would want it.”
“I have seen it. Because I wrote the book.”
“So I was right. You do want it.”
“Not really,” I said. “I already have too many copies of the book. Let’s give it to Shedley.”
So my mother handed the book to Shedley, who was still suppressing her laughter, and said, "I haven't written in this, so you can have it."
I said to Shedley, "Just don't give it back to me. Even if you don't like it."

Labels: Mother, What to Wear to See the Pope

I need honey raw for my French bulldog allergies

This is for you grammarians out there. I need your help.

Let it Bee received this email:
The subject line: I need honey raw for my French bulldog allergies

What would you do?

Initially I assumed the sender needed raw honey for his/her French bulldog, who suffered from allergies. 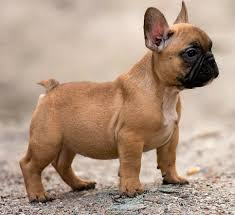 CSB said no, I had misread it, that it was the sender who was allergic to his/her French bulldog. are another fish altogether.)

Or, if the bulldog is allergic, how can you tell?

Do bulldogs even like honey? Or miel as we say in Paris?
Posted by Christine Lehner at 10:04 AM No comments: