So tomorrow we are taking Mom to Belgium for what will surely be her last trip abroad, her last visit to the land of her birth, and most likely her last trip in an airplane. We are doing this just in time. (That is what I am hoping. We could also be doing it too late, in which case I can anticipate a meltdown at the junction of Rue de Chêne and Rue de L’Étuve, when Mom does not recognize Manneken Pis.) 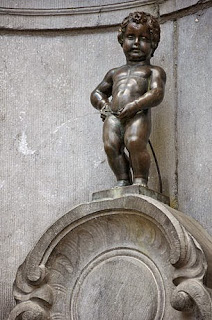 Her short-term memory is shrinking like wool in the dryer; sometimes her retention can be measured in seconds.
In preparation for this trip she has read a book about Belgian castles (lots of pictures, written in 4 languages, at least two she knows well), and has told me that she is surprised to learn that Belgium is full of old castles (22 times.) She praises my cousin Pascale for having given me this book (19 times.) She tells CSB that he will enjoy the flat countryside (11 times). She informs us (countless times) that although she was born in Belgium, she never lived there, as they moved immediately to Egypt after her birth. She has related (4 times) an apocryphal story of her maternal grandmother urinating in soup she was forced to serve to billeted German officers. (Mom has the wrong war.) Also in preparation Mom has had a massage, will have a facial later today, and tomorrow will get a wash and blow dry. I will take more Sudafed. So we are ready to go.

I am looking forward to finally seeing Geel. For years I have read about this unusual town outside of Antwerp, where for hundreds of years the inhabitants have taken in the mentally ill, and cared for them in their homes. The tradition goes back to the (possibly apocryphal) martyrdom of Saint Dymphna in the 7th century. She was the Christian daughter of a pagan Irish king. Her beautiful mother died when Dymphna was young, and her father the king vowed he would never marry again unless he found someone as beautiful as his beloved dead wife. When Dymphna grew to be her mother’s spitting image, her father conceived an “unlawful passion” for his daughter, and she had to flee from her homeland. She went with her confessor, Gerebernus and they ended up in a forest outside Antwerp. That should have been far enough and remote enough, but it wasn’t, and her father discovered refugees in their sanctuary. Again she refused his incestuous overtures, and the king ordered his soldiers to kill both Dymphna and Gerebernus. But the soldiers refused to decapitate the lovely young girl, in the end her father did the deed himself. (Sounds like mental illness to me.) Their martyred bodies were buried by angels, and over the years the place and the relics were imbued with miraculous healing powers. Pilgrims came from all over, and brought along lunatics, epileptics and sleepwalkers to be cured. The tradition continues, and Dymphna is the patron saint of lunatics, sleepwalkers, epileptics, incest victims, those with neurological disorders, princesses, runaways and therapists. We would be remiss not to make the pilgrimage. 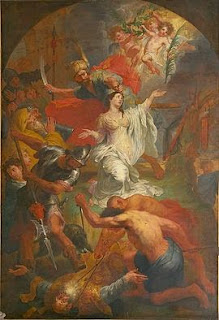 The beheading of St Dymphna by Godfried Maes (1649-1700), a member of the Antwerp Guild of St Luke; he was particularly good at ceiling designs.

Meanwhile, I am reading about new tests one can take to learn if one has the ApoE4 gene that indicates a high likelihood of getting Alzheimer’s. Should I get this test? Having an exit strategy is not a bad idea.