A little self-puffery, from a robot no less

Truly, I appreciate all my SQD readers, small and select group that you are. But the following may well be the highest critical praise my writing has received…in quite a while.(And from a dirtbag, no less. We take what we can.) Someone at Roomba sent this to my rather remarkable niece, Eliza:

I am not sure where Alenda at Roomba got the idea that I have poetic talent. Maybe she was thinking of poetic license?

Thank you for sending us with this glorious piece which was written by your aunt Eliza!
It was an absolute pleasure reading this and we think that she has a real talent in poetry.

Being a Roomba owner myself, I've also had many ways I wanted to describe my Seth to my interested neighbors and friends but I was never able to find words that can be used to describe the beauty of Roomba. Your aunt was able to write how I felt about Seth with just a few keystrokes and for that, we thank her.

There were a few parts that were especially very interesting such as "When Roomba first arrived, I decided to name it. In our never-ending effort to be politically correct - why should house cleaners always be female?" This is precisely why I decided to name Roomba with a masculinity just for the sake of equality!

We also loved reading this; "I already have a vacuum cleaner, an Electrolux that is generally considered to be a first-class vacuum. But my vacuum requires a human being to push it around the house. Roomba requires only that he is recharged. And his dirt bag emptied."
Eliza, this is exactly how we want our customers to feel about our robots. We want them to feel at ease and relaxed while Roomba does all the work needed to keep a home very comfortable.

Again we do thank you for the opportunity to read this lovely piece and we wish you and your aunt all the best!

Additionally, we would like to know if you own a Roomba or if your aunt's Roomba is registered with us. Please let us know by responding to this email or calling us at 1 (877) 855-8593. We are available Monday through Friday from 9am to 9pm, and then Saturday & Sundayfrom 9am to 6pm (EST).

Posted by Christine Lehner at 11:59 AM 2 comments:

This came from the Hastings police 3 days ago:
Hastings-on-Hudson Police Department: currently tracking a wild coyote that maybe rabid and attacked two people and their dogs this evening. Please Stay out of all wooded areas in particular Hillside Woods.
HASTINGS-ON-HUDSON POLICE DEPARTMENT

The next day this came:
The Hastings-on-Hudson Police Department is currently tracking a wild coyote that maybe rabid and attacked two people and their dogs this evening. One incident occurred on Kent Ave. The second occured in Hillside Woods. The injured parties were taken to the hospital.

And for a change in what to worry about:
NOR'EASTER UPDATE: NUMEROUS FALLEN TREES AND DEBRIS PLEASE STAY OFF THE ROADS. CALL 1-800-752-6633 TO REPORT POWER OUTAGES. HIGH WINDS FORECAST TO CONTINUE

But we haven't forgotten the coyotes:
Message from the Mayor: Coyote attacks in Village
Last night, between 6:30 and 8:00PM, three people were attacked and bitten by a coyote and a small dog was killed. Two of these attacks occurred on Kent and on Overlook, and one in Clarewood Village. All attacks occurred on the street. The three victims have been treated at hospital and released. The animal also charged a number of other residents (and, in several cases, their pet dogs) though did not inflict any injury. The coyote has not been located and destroyed. It was last seen running toward Hillside Woods.

Hastings-on-Hudson Police Department: Coyote Information & Safety Tips
HASTINGS-ON-HUDSON POLICE DEPARTMENT
On February 28, 2018 at approximately 3:50 PM the Village of Hastings on Hudson Police Department received a call from a resident who reported being involved in an auto accident with a coyote on Broadway near Burnside Drive. Patrols were detailed along with the Greenburgh Animal Warden. It was determined the coyote suffered fatal wounds. The animal was transported by the Greenburgh Animal Patrol to the Westchester County Health Department for testing. 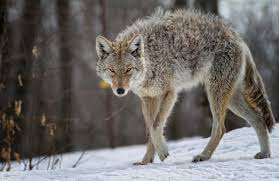 How many coyotes were there? Are they all dead now? At least one is still at large, licking its chops in anticipation of munching a lapdog.

Tristram was bitten by a rabid dog on his honeymoon, at a Temple outside Hanoi. He got a series of rabies shots, in Vietnam and back in the US, and hasn't thought about it since. (Unlike his mother.)

One small dog was killed, and at least 4 people have been attacked. I am pretty sure the dead deer I saw on the Aqueduct on Tuesday was killed by a coyote. I didn't think about it at at the time, which doesn't say much for my powers of deduction.

One coyote was captured and killed on Dunwoodie Golf Course. It was a scratch golfer.

Yesterday afternoon my mother's caregiver, Ava, called me from the Red House. I don't want to say she was hysterical. She was in a tizzy. Ava is somewhat zoophobic. Insects freak her out. When we set mousetraps in Mom's house, one of us has to go check on it early in the morning, before Ava can even see it. So it follows logically that Ava would be rendered quasi-hysterical by the coyote alert in our village.

The local police had knocked on the Red House door and told Ava and Mom to stay inside, because the coyote had been spotted in our backyard. I reassured Ava that coyotes cannot open doors, so that as long as they stayed inside, all would be well. I read in the paper this morning that a few minutes after that call, a car killed a coyote across the street on Broadway and Burnside, saving the sharpshooters from Albany the trouble. I never saw the police, or the coyote. Not this time.

I thought the coyotes were going to be the scariest thing to contend with today. And the most troublesome thing to contend with would be the leak in the bathroom ceiling. The ceiling leaks whenever there is heavy rain, and today there was heavy rain, and so much else. Then the sink upstairs started leaking, or just oozing water onto the floor. And since the stand is encased in porcelain, I cannot turn off the water valves, which I am capable of doing when such things are accessible. At the same time, the toilet in the powder room next to the kitchen started leaking, but CSB was able to shut of the water valve.
Coyotes were looking like a minor blip in the day. The chickens were safely locked inside. And as I told Ava, coyotes cannot turn door knobs.

The wind keeps blowing. In the kitchen the wind generates a high pitched squeal that has something to do with the weather vane atop the cupola. Upstairs the wind sounds like whistling, particularly like the whistling of someone with a missing front tooth.

I had an appointment this morning with the water company meter reader. For many months they have been sending my mother (me) estimated bills because no one was reading the meter. The Suez service guy arrived. Ava wouldn't let him wait in the house, so he sat in his truck and I walked over to meet him. He drove down the driveway and I walked through the trees to the far northeast corner, where the property abuts our neighbor's property and Broadway. I noticed that the new owners of the Forge Cottage had installed a large wooden compost pile on our property, on our side of the fence. That seemed odd. I was thinking about how to address this issue, in a neighborly way. I haven't even met these new neighbors, and I didn't want the first thing I said to them to be: Please put your compost onto your side of the fence. And welcome to the neighborhood. Meanwhile, the water meter was right where CSB said it was. Then the young man headed back to his truck to get his tools, and I was still in the wooded area checking out the snow drops when there was ominous cracking, and then more ominous cracking and then an enormous limb came down, snapping off more limbs on its way down. I started running away from the falling tree, when I heard more and louder cracking, and an even bigger tree came down. I kept running to get out of the trees. The meter guy quickly departed, leaned out the window of his van and said they would call to make another appointment.

In the grand Darwinian tradition of idiots going for walks in swampy woods during a wind storm, I was almost flattened by a tree.

Afterward,I stopped in to see Mom and Ava (still all agog about the coyote). I did not mention the near miss by the descending tree.Going home I kep far away from any trees.

Just a few minutes ago I was having yogurt and berries in the dining room (the kitchen table can't go back until tomorrow) when I heard another loud crack and watched as the biggest of the birch trees went crashing down. Away from the house. That is two trees I've dodged today. I am feeling superstitious. 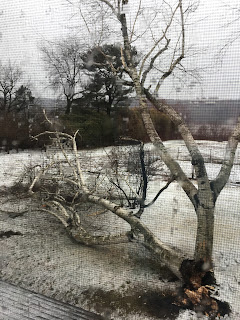 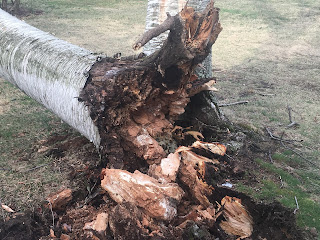 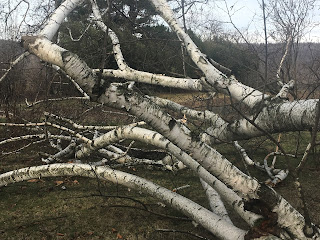 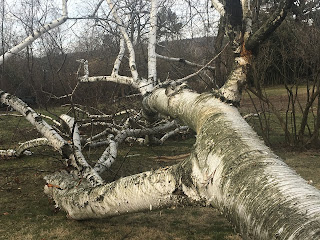 The birch is iconic to this house and this property. Something inside my head cracked with it.

PS: This was written yesterday, but I I couldn't post it as we had no internet. We still don't. I am getting creative.