I have come next door to visit Mom and bring her various things: the newspaper, fresh eggs, batteries, a book about Ethiopia, chicken Marbella I made yesterday. I’ve fixed the curtains in her bedroom, and deciphered a name on a piece of mail. (A very old Belgian friend. “I never liked him,” she told me.) Now it is time for me to get going.
Me: Bye Mom.
Mom: Where are you going?
Me: Home, next door.
Mom: Well what for?
Me: I have to get to work.
Mom: Oh? What are you working on?
Me: I am writing a book.
Mom: That’s nice. What is it about.

Me: It’s a novel about a Hungarian man who develops a rare disease and tries to cure himself with horseshoe crab blood, and his ex-wife, who still loves him, but had an unfortunate affair with an ex-felon, and their daughter who is obsessed with language and a boy named Henry.
Mom: Why is he Hungarian?
Me (One foot out the door): It seemed like a good idea at the time.
Mom: Your father and I went to Hungary, but we didn’t like the food.
Me: (Curbing the impulse to tell her that they never went to Hungary, because it is bad form to contradict an Alzheimer’s Assertion, and I know that claiming to have been in every country ever mentioned is a compensatory mechanism for her these days.) It doesn’t take place in Hungary. It mostly happens on Cape Cod.
Mom: What is Cape Cod?
Me: It’s right near where you lived for sixty years. We used to go there in the summers.
Mom: I don’t think so, but if you say so. 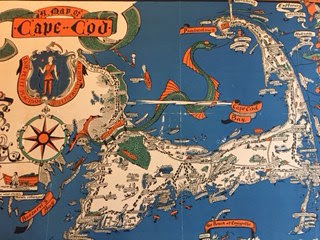 Posted by Christine Lehner at 2:50 PM No comments:

On mousetraps and facial hair

At 4 am yesterday morning CSB was making coffee in the kitchen when the cable box went Ka-boom, then Gra-kakak. Then the lights went out and the disturbing smell of fried electronics wafted through the air. In the dining room one small sconce light blazed like the sun and blew out with some fanfare. Although it wasn’t immediately obvious, because it was 4 a.m. and most of the lights were out anyway, all the lights would in fact be out because a. the electricity was gone, and b. because the power surge had zapped out all the light bulbs. That acrid burning electronic smell pervaded the house like toxic waste. Concerned about an electrical fire, CSB called the local volunteer fire department, and suggested that someone come over to check it out; he indicated that no trucks were necessary because the house was most definitely not on fire. Soon there were three hook and ladder trucks, with all their lights burning and rotating. There were seven volunteer firemen all in full gear (hard hats, big rubber coats with neon yellow stripes, walkie-talkies, stuff I don’t recognize) walking around, in and out of the house. A few more firemen were sitting in the trucks.
About fifteen minutes later we were all reassured that the house was not on fire, electrically or otherwise, but a very large tree (massive according to Channel 12 News, but we all know they are prone to hyperbole) had fallen across Broadway just north of us, essentially right next to the Red House driveway, taking down electric wires and a pole with it. 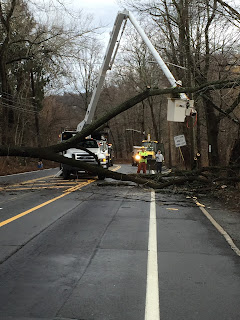 I went back to bed and took an Advil PM and CSB put on his headlamp and called ConEd and made sure everything was safe, and started up the generator, and later – while I slept on –he called the electrician and then went to work.

Because Mom’s house also had no electricity and we had a generator, I walked next door (it was a ridiculously balmy day, and the ground was muddy) and fetched Mom and Ava, her caregiver, and brought them over to my house and gave them breakfast. While I was making her an omelette, Mom was fiddling with things on my counter. She wanted to know what a clementine was. Just as she picked up the mousetrap to ask what it was, it snapped shut on her fingertip.
“Ouch,” she said.
“That’s a mousetrap,” I said. “Does your finger hurt?”
Mom said, “Why?”
I said, “Because the mousetrap just caught your finger instead of a mouse.”
“I think so,” Mom said.
Then I put some ice on her finger, and gave her a Tylenol.
After eating her omelette Mom asked me again what this thing was, and I told her again it was a mousetrap and sometimes it was a good idea not to pick up a device if one didn’t know what it was meant for. I feel confident she will not recall this wise advice.
Leaving Mom reading yesterday’s newspaper, I went down to Broadway to see this massive tree. And to watch the two videographers from Channel 12. Several people made the same comment: it must be a slow news day. Then there were live wires swinging across the road and the local constabulary told us to hustle and get out of the way. 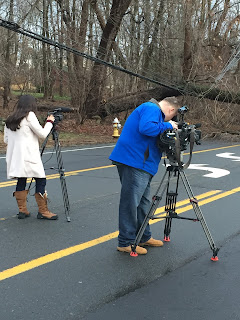 When I returned in an hour there were two guys from Con Ed in two buckets attached to two cherry pickers, working on the wires. I was so very sorry Iggy(4 years old,resident expert in construction machinery) was not here to admire all this vehicular firepower. One ConEd guy in a bucket sported a shaggy white Santa Claus beard. In the other bucket the ConEd guy had an identical large shaggy beard, except that his was black.
A while later, Chris from ConEd came to up the house to tell me that the power was back on and to help me turn off the generator and restart the main. He wore a neon yellow jacket and had a dark beard and mustache. He told me that his brother-in-law upstate kept chickens and two cows. He was exceedingly cheerful and helpful.
Later Rich the electrician came over, because even though the electricity was back on, all sorts of electrical devices were not working. That was when we discovered that the power surge had fried the oven and microwave, blasted lots and lots of light bulbs, and incinerated several power strips. (Rich gave me a lecture on the dangers of power strips.) He has a grey mustache and wore a red and black flannel shirt. He said I needed an appliance repair guy to fix the oven, if it was fixable, which he doubted.
As Rich was leaving, Brian from Optimum came to fix the internet and phone. He wore a bright green vest, and his facial hair was something between a small goatee and an expanded soul-patch. When I pointed out that it wasn’t a great idea to smoke a cigarette while he was up on a ladder fiddling with wires, he agreed that smoking was a bad habit and he had in fact quit for a while, but then his grandfather died and he was stressed out. He showed me the white underground cable that had sizzled and melted away. It was impressive.
Then Jerry the appliance guy pulled in. He lives nearby and was very agreeable about coming over to check on the oven. He has a salt and pepper beard and longish hair, so far as I can tell, because he never takes off his backwards baseball cap. He always wears very baggy pants and said there was a chance that with a new circuit board he could fix the oven. We will have to wait for the part to be delivered.
Dinner last night did not involve an oven.

This morning it was snowing, and I was thinking how lucky we were that the tree had not come down this morning because it would have been far more challenging to remove the tree and reconnect the wires in the middle of a snowstorm. So I could stay in bed a few more minutes and watch the snow fall and wonder why it was that not a single clean-shaven man (yes, they were all men) worked on the tree or the electricity yesterday.
Then the phone rang. It was Ava.
She said she was sorry to call to call so early, but there was a mouse in the kitchen.
“What is it doing?” I asked.
“I don’t know. I’m in the bedroom. I can’t bear to look at it.” Ava, it should be pointed out, is a vegan. She won’t even eat honey because we steal it from the bees.
“Is it dead or alive?” I asked.
“Oh, dead,” she said. “In the trap.” I had forgotten that, at Ava’s request, CSB had set a mousetrap in the Red House kitchen last night. “Right in front of the refrigerator.”
I got dressed and pulled on my boots and walked next door in the lovely snow. I took off my boots in the porch and went inside barefoot, and then Mom wandered out in her dressing gown and asked me why I had come over in my bare feet. I suggested she return to her warm cozy bed. In the kitchen I picked up the mousetrap which had put an end to this one little mouse and put it in a paper bag. And even though I saw no other evidence of its late existence I washed down the floor in front of the refrigerator with a paper towel. Mom, who did not go back to bed but was watching me, asked me what I am doing.
“I am taking away your mouse,” I said.
“Did we have a mouse?”
“Not any more. Now, please, go back to bed. You can watch the snow come down while in comfort.”
“I don’t think you should walk barefoot in the snow,” she said.
“Good idea,” I said. “I will put on my boots.”
She watched carefully as I put on my boots, and walked home through the snow, carrying a bag full of dead mouse.
It is a known fact that if you look closely at a mouse, dead or alive, you will see wisps of fur on the tip of his chin. And of course, there are his whiskers.


Posted by Christine Lehner at 3:38 PM No comments: