Once again we got in the car and headed south, and then west. This time it was mostly west to Kansas, specifically to Lawrence, Kansas, a delightful college town replete with excellent diners, Prairie and Craftsman architecture, and transplanted Easterners.
Historians know that Lawrence was settled in 1854 by the New England Emigrant Aid Company, originally 29 men intent on promoting the abolition of slavery and ensuring that Kansas would enter the Union as a Free State. All did not go smoothly. On August 18, 1863, a certain William Quantrill led a group of pro-slavery Missourians (Bushwhackers) against the anti-slavery residents of Lawrence (Jayhawkers) and slaughtered everyone they could find. At the end of the day there were 85 widows and 250 fatherless children. These days you can take a self-guided driving tour of Quantrill’s Raid. It takes about one and a half hours.

But I get ahead of myself. We meandered our way to Kansas, stopping to bathe in mineral springs in West Virginia, lunch in Harmony and unsuccessfully seek Economy, Pennsylvania.

One thing that strikes the insular New Yorker in the course of visiting other states is the prevalence of signs prohibiting guns. These signs are necessary because, so I learned, guns are otherwise legal and carried everywhere. Absent such a sign, you can assume that the diners at the next table in Indiana, or the passengers on a Mississippi river boat, or the lady in the stall next to you in the rest room, are all carrying concealed weapons.

Here is the home of James Thurber, beloved humorist and creator of Walter Mitty. 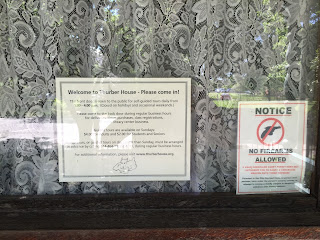 And here is the home of Abraham Lincoln. Yes, even at Lincoln’s home it is necessary to tell gun-toters to leave their weapons at home. 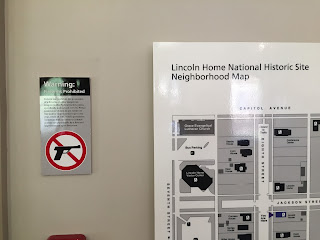 And here is the Dana Thompson House, designed by Frank Lloyd Wright, in Springfield, Illinois. 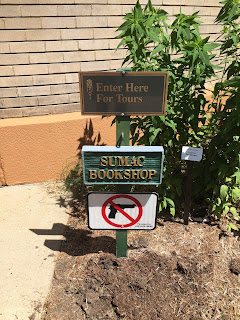 This sign is outside the wonderful Nelson-Atkins Museum in Kansas City, Missouri. 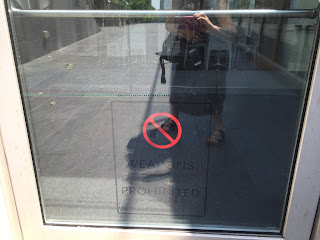 You get the idea.

We drove straight home Sunday and Monday,with no more stops at historical sites or museums (Well, yes there was one. We visited the Kent State University Memorial in Ohio.)and the one story on the radio, on every radio station from Kansas to New York,was the shocking massacre of 49 people in Orlando, Florida by a man who was allowed to legally to buy automatic weapons that have no other function than to slaughter people, lots of people.
Posted by Christine Lehner at 1:59 PM 1 comment: