Another slippery slope to worry about


It turns out that the Vatican and I have more in common than our preference for funny hats and white robes with a simple – but elegant – gold trim.

Yes, we both worry about Global Warming.
Just last month the Vatican was so worried about GW that it allowed a priest in the tiny village of Fiesch, at the foot of the receding Aletsch Glacier, to alter a centuries old prayer. The old prayer asked for divine intervention to push back & shrink the glacier. The newly-authorized prayer asks the Almighty to do just the opposite: keep that glacier from getting any smaller.

But this is not the innocent volte-face it may seem. In fact this is a slippery slope if ever there was one, a Vaseline coated declivity straight to hell. A nosedive into that morass the pundits call ‘science’.

What is next?
Will the virginity of the BVM be questioned and then re-addressed, in light of her having actually given birth?
Will the Cardinals all have a conclave and decide to marry their childhood sweethearts?
Scariest of all, will it turn out the Shroud of Turin is not the genuine imprint of Christ’s pained face but your uncle’s precious rag for buffing his 1949 Chevy?

A few things about Georgian Bay, the science of food, and a quiz:


Before we could arrive at Georgian Bay we had to cross the border into Canada, and we did this at the Thousand Islands Bridge (really 5 connected bridges and I highly recommend it) over the Saint Lawrence Seaway. Once across the great divide (while more intensely guarded than I recall from my youth, its rigors cannot hold a candle to harassment at various Nicaraguan and Syrian borders I have had the pleasure of crossing) I felt the call the nature and wanted to stop. But RR was at the wheel, and the sharp words she had exchanged with the Canadian Border guard had upset her.
Border Guard: Are you bringing in any food, fruits or vegetables?
RR: No.
BG: What do you have in the back seat?
RR: Just some sandwiches and granola bars.
BG: Sandwiches are food.
So we did not stop at the handy rest area just after the border station but continued to Gananoque (rhymes with Cataraqui, if that helps.), and pulled into the first possible place, a Ramada Inn. And what a good idea that was. Because downstairs in the Ramada Inn, alongside the rest rooms, was displayed the world’s largest collection of Antique Blow Torches. Subsequent researches - at least 5 minutes on the Internet - have revealed that this is not as strange as it sounds; there is in fact a lively trade in antique blow torches on both eBay and Etsy. Upstairs at the Ramada Inn, no one would tell who was the guiding light of the blow torch collection. But if you are ever in Gananoque, I recommend a visit. 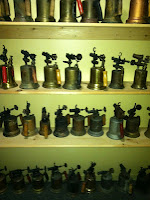 We kept driving. Next to come was Tiny.
Tiny is which of the following? 1. a term of endearment, 2. a descriptor of size, 3. a lady’s lapdog, 4. a township in Ontario, 5. A particle recently discovered by scientists using the Supercollider.
Besides being all of the above, Tiny is nearby to Penetanguishene which played some kind of part in the War of 1812 (Bicentennial Alert). One of the things that distinguish Canadians from Americans is that Canadians actually know something about the War of 1812, and we do not.
Here is what we did at the cottage on Tiny Beach: we swam, we wrote stories, we read books, we painted and we looked for Benji the lost dog. Some read more books, one of us drew beautiful sketches, and two of us even played the violins. I took numerous photographs of my feet on the sand and in the rocks. 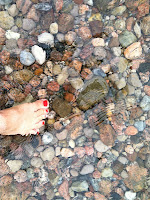 But mostly, we cooked meals and then dined on the deck overlooking the expanse of Georgian Bay.

RR, our hostess at the cottage on Tiny Beach, was raised as a Christian Scientist and has a prodigious capacity for memorization. Hence, she can recite – with emphasis - the CS Statement of Being. Because my ex-late-husband was related to several, I once spent lots of time with Christian Scientists (neither Christian nor scientific, as has been noted elsewhere), and some of them I loved dearly. But to my shame, I never properly absorbed the CS S of B. I did this time, when RR displayed her mnemonic abilities and declaimed the S of B on the deck, as the uncannily warm waters of Lake Huron lapped the shore behind her. I listened carefully for once and I was shocked. I heard a doctrine that denied the very existence of what we did and enjoyed at Tiny.
“Spirit is immortal truth
Matter is mortal error….
Matter is the unreal & temporal…therefore Man is not material, he is spiritual.”
In other words, illness and death do not exist, and neither do pleasures of the flesh. Gastronomy, for instance.

Question for extra credit: Have you ever heard of a Christian Scientist chef? Are there any foods you associate with CS? Have you ever heard the name Mary Baker Eddy and the expression ‘fine dining’ in the same sentence?
A: Of course you have not, no, and no.

Aside from dining well in contravention of all CS tenets, I was reading John Lanchester’s Debt to Pleasure. This delightful novel is told by a (possibly) homicidal lunatic/gastronome and uses the conceit of seasonal menus to organize the narrative. Reclining on Tiny Beach with the warm waters of Lake Huron lapping at our toes (immersion in the water to thwart the biting sand-fleas), I also felt compelled to read aloud pithy and hilarious passages (and some pages had several) to my fellow recliners. Actually, the only person who was ever willing to listen was M-A, who had recommended the book to me in the first place and so was well acquainted with the very passages I chose to iterate. Lanchester’s narrator’s knowledge of edible and toxic mushrooms is legion, and the secret of his Croque Monsieur is Dijon mustard; I always thought that was my secret.
I promise you that when I made Croque Monsieurs one day for lunch I had not yet read the passage in Debt to Pleasure with Tarquin Winot’s recipe. It was an excellent lunch too, served with fresh tomatoes and followed by a clafoutis with Ontario peaches. We drank pink wine from Provence, about which much has been said on other occasions. 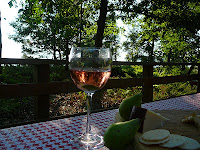 As mesmerizing as it was to hear the recitation of Mary Baker Eddy’s creed - her Statement of Being - I cannot say that we gave much thought to her repudiation of the mortal world as we dined on fresh vegetables, grilled lamb chops and homemade naan, and especially not as we drank the aforementioned pink wine from Provence. But on another occasion, I studied the kitchen cabinet replete with cereals and granolas (more of the not-food brought over the border by RR) boasting of their flax, bran, oats and grains edible and inedible, boasting of their benefits to health and digestion. And I wondered if there could be any connection between the invention of Christian Science (ca. 1879) and that era’s promulgation of ‘healthy’ and scientific eating methods, eating methods designed to give the opposite of pleasure. Consider John Harvey Kellogg (1852-1943): while superintendent of the Battle Creek Sanatorium, he formulated his ideas about eating and digestion. He extolled the benefits of a “squeaky clean intestine”, and to that end, he advocated nuts, ‘granose biscuits’ and enemas. No one has ever asked for a last meal of corn flakes. Kellogg’s like-minded contemporary Horace Fletcher was known as the “great Masticator” because he advocated that each bite be chewed 32 times. At which point all flavor and texture was effectively eradicated.
Could we lay the blame for the unfortunate scientification of food, at the tiny feet of Mary Baker Eddy?
Back to the splendors of Georgian Bay: we neglected to grill any local walleye (known for their excellent vision and sharp teeth), our own small dereliction of the exigencies of la gourmandise.

Posted by Christine Lehner at 3:04 PM No comments:

Oh, to happily split an infinitive

Yes, it is true. Fourteen years ago today, the Oxford English Dictionary declared that we speakers and writers of the English language were now allowed - encouraged even - to legally and gleefully split our infinitives. No more would we be put in the stocks by annoying pendants for declaring that we wish to quickly run to the store, in order to cheaply acquire some Calamine lotion for the poison ivy that afflicts several of our body parts. If the OED, the arbiter of all things grammatical and etymological, says it is okay to blithely split, then split away.
Posted by Christine Lehner at 1:11 PM 2 comments: