The local standard for holiday parties was raised by several notches last night when our hostess, la belle Nonnie, greeted us in a *new* Louise Brooks bob, brandishing twin bottles of Moët Chandon. I admired the new do, and was proudly told that no animals or human hair were slaughtered to produce this wig – it was created entirely from recycled soda bottles.

The cabaret singer hailed from Boise, Idaho and as proof of this exotic provenance, she pointed to her wrist corsage. It had been FedExed that very morning by her mother, still busy conducting the Methodist choir back in Boise. We nodded sagely as if a wrist corsage was proof positive that one’s origins were Northern and/or Midwestern and far from New York. She sang beautifully, and danced irrepressibly. Irrepressible dancing could be found in several nooks and niches.
Did I drink champagne and nibble on Gavin’s delicious smoked salmon? Did I converse with old friends by flickering candlelight and drink more champagne?

I did, and it was an excellent counterpoint to a long day that included 57 emails between yours truly and my siblings regarding my father’s hospitalization for: congestive heart failure, pneumonia, water on the lungs (is this the same thing as pneumonia?), anemia, even though he used to have the opposite of anemia (polycythemia vera), and refusal to drink water that does not include scotch. Why, you may ask, does the Aged P’s hospitalization require so many emails on the part of his offspring? Because it takes a minimum of that many emails to organize (browbeat in some cases) siblings to get to the ancestral home and look after Revered Mother, who in her Belgian stubbornness* has thus far refused to get sufficient help in the home…hence the crisis.
The Aged P is improving, but will not,alas, be available for caroling on Christmas Eve.

Not to belabor the point, but this family seems to be developing an unfortunate tendency to medical crises over the holidays, just when they are most inconvenient. It makes one pause. And pause again.

*According to Revered Mother’s younger brother, stubbornness is a specifically Belgian trait for which she cannot be held entirely responsible.

What to do when you cannot operate Heavy Machinery

It is only because I was unable to spend the afternoon operating heavy machinery that I allowed myself the time to contemplate the tempestuous and sartorial life of Christina of Markyate. 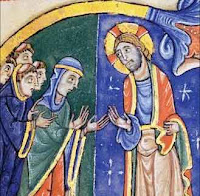 When being informed about the ‘procedure’ scheduled for this morning, I had neglected to properly note the prohibition against operating heavy machinery. (Now what do I do about the wood chipper? The chain saw? The electric waffle-maker? How heavy is heavy?)
The nurse claimed that the anti-heavy machinery injunction was clearly started somewhere in the 144 pages of informational paperwork and liability waivers. Or maybe it was imbedded in the 25 minute video that the doctor’s office sent to my email and then ….then, they actually knew if I had actually watched it and they even knew if I had started it and then decided I’d had enough of animated pictures of curly colons being probed by paparazzi electric eels, in which case I received ‘gentle reminder’ emails to watch the whole damn video, and if I didn’t watch the whole thing they threatened to perform the colonoscopy without anesthesia, so I could feel and hear everything I missed.

Somewhere in there I was not focusing on the heavy machinery taboo.
And since I can’t be applying myself to heavy machinery, as would be my wont, I have spent some time with Christina of Markyate (1097 – 1160) who, even if she never had the fun of operating a wood splitter, was seriously ahead of her time in the matter of defying parental matchmaking, defying the bishop, and needlework. The mitres she embroidered with silken threads for Pope Adrian IV were the twelfth century’s high point in millinery. She also proved to be a formidable adversary to the toads (sent by the devil) who invaded her anchorite cell. But far more challenging than the toads were the visions of Roger, her favorite priest, naked. These visions were of course likewise sent by the devil to tempt her, and Christina resisted that temptation. Valiantly.
A wood chipper would have been a walk in the park for Saint Christina of Markyate.

Perhaps you have been wondering how you will celebrate the 300th birthday of Frederick the Great of Prussia (Friedrich der Grosse), also known as the “potato king.” Perhaps you planned to order extra home fries with your Western omelet, and leave it at that. But you would be denying yourself serious fun.

Frederick the Great (1712-1786) had to face serious opposition when he set out to introduce the potato crop to Germany.
We know that the Spanish conquistadores discovered the delights of potatoes in Peru and Bolivia, and brought the tubers back to Europe in the 16th century. Potatoes spread throughout Spain and Italy (gnocchi), and up the Low Countries (frites) and Britain (chips). The Swiss botanist Caspar Bauhin correctly identified the potato as a member of the nightshade family, making it a relative of eggplants, deadly nightshade, wolfberry, tobacco and petunias. Meanwhile, others somewhat fancifully assigned to the potato aphrodisiac powers and nicknamed it “Eve’s apple” and “earth’s testicles”.

Though potatoes were being randomly grown in Germany by the end of the 18th century, they were hardly widespread and were generally viewed with superstition. FtG wanted to change all that. Around 1774 he set out to encourage potato cultivation, as away of diversifying the grain harvest with a root crop. But lumpy testicular blobs were not immediately appealing to the peasants, so Frederick had his own potato fields planted, and then set his soldiers to guard the field: to ostentatiously guard the fields, thus provoking curiosity. They were also instructed to not actually stop anyone from stealing the potatoes from the fields. Any parent recognizes this agricultural version of what we like to call reverse psychology.
And it worked. (Dumplings, German potato salad)
By 1776 the potato crop was an important food source. So much so that the War of Bavarian Succession is more commonly known as the Potato War (Kartoffelkrieg) because instead of engaging in any battles (none) the soldiers on all sides busied themselves despoiling the local peasants of their food, digging up the potatoes, and glaring at one another.
Meanwhile, FtG and Voltaire were close friends, and occasional frenemies. They both enjoyed debating arcane philosophical points, and topping off the evening with kartoffle pie and schnapps. Frederick especially enjoyed the rare occasions when he might outwit the brilliant (and showoffy) Voltaire. One day FtG asked Voltaire if he could estimate how many pounds of potatoes were hanging from trees in Prussia. Just to rub it in, he said that even his horse knew the answer to this one. Since I heard this story translated, I cannot vouch for my accuracy. But the punch line is that Voltaire did not realize that potatoes grow underground, not from trees. Voltaire was miffed and left the palace in a huff. The two enlightened friends were later reconciled and enjoyed many more evenings of potatoes and philosophy.

How does Christine know all this fascinating stuff about FtG and the potato, and why do we care? Recently the adventurous and likewise-porcelain-loving Bine and I visited the Königliche Porzellan-ManufakurKPM plant. Right in the middle of Berlin is this beautifully restored porcelain factory. We had a delightful time and I managed to emerge without breaking a single thing.
Frederick loved porcelain almost as much as he loved potatoes, and so KPM is honoring Frederick’s 300th with the creation of a porcelain potato. Yes, for 90€ you can buy, own and acquire a porcelain potato. I can’t presume to think what FtG would have thought about this, but I imagine that Voltaire would have been delighted. 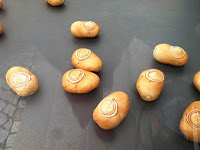 Posted by Christine Lehner at 12:46 PM No comments: