The Lost Gloves and then some

Every season brings its losses. Winter brings gloves, and also scarves and hats and sometimes even your blankie-pillow. Can you match the lost items with their correct location? There will be prizes for correct answers.
And as for Cinderella... 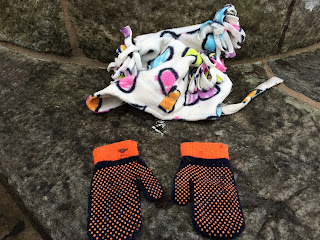 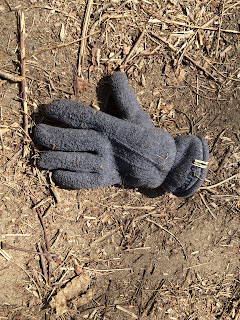 B. Hastings on Hudson train platform
3. 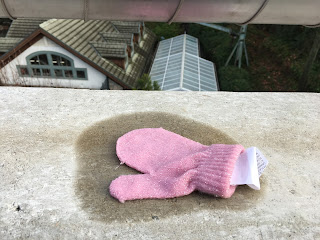 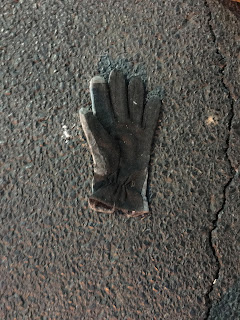 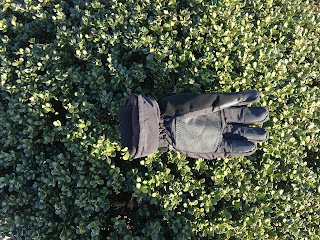 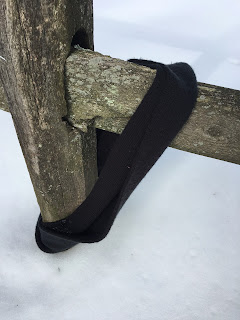 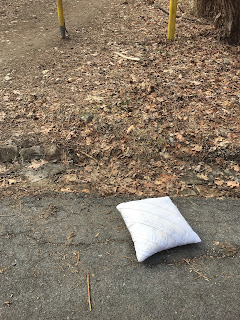 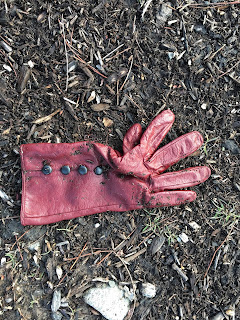 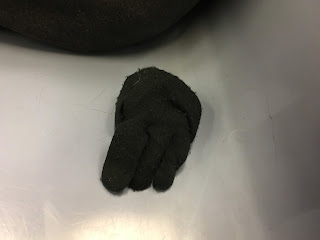 I. Somewhere in Brooklyn
10. 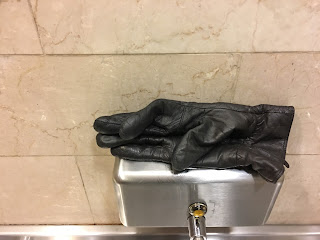 J. Warburton Bridge
Posted by Christine Lehner at 11:28 AM No comments:

Because there were so brilliantly noisy, and ever-present, and because they were kind enough to build their colony of hanging nests (referred to as the “testicles of God” by the ineffably epithetic RB) right in the garden at Aquiares, on the upper reaches of a beautiful ceiba (kapok) tree, I have become a devout aficionado of Montezuma oropendolas, with all the excessive piety of a recent convert. 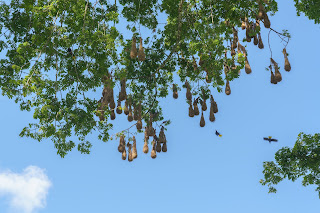 First I had to learn to spell their name properly: it is one word, oropendOla, not oropendUla, as I had always assumed, based on the hanging nature of their nests. (from the Latin, pendulus, pendere.)

Then I wanted to get an oropendola song (“a conversational bubbling followed by loud gurgles”) on my phone to use as a ringtone, and to that end I downloaded a couple of free birdsong apps. Neither of them had oropendola songs, and in fact they seemed pretty useless. But most disturbing: having opened the Bird Sound App, an ad kept appearing at the top of the screen, and also in the middle, for “The Gentle Goodbye….Let us give your pet a peaceful death - At-Home- Pet - Euthanasia.” Seriously. This ad kept appearing and re-appearing.
I just have to think it is very creepy. Either my phone (i.e. Google/ Big Brother) knows that Bruno is demented and incontinent, and there seems no reason why my phone should know this, OR, this is just a random ad that strikes a rather painful chord here. In which case, it is a very odd choice for a random ad. What if I have no pet? What if my pet is alive and well? What if I don’t believe in euthanasia? Is there some reason why someone interested in bird sounds would also be seeking to kill her dog? There are so many reasons why this ad is a bad idea.

So for now, my ringtone is a loon.

Posted by Christine Lehner at 12:29 PM No comments:

Snake in the grass, alas 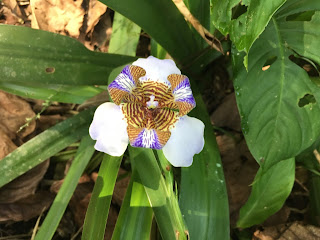 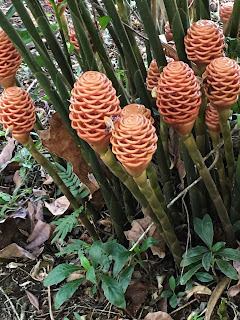 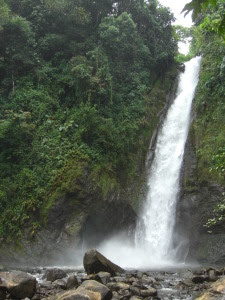 Lest you think it’s all benign in the tropics, all garish birds dazzling flowers mystical fruits, and beans, let me disabuse you. One day we went with Minor (gardener and very helpful person) to the top of the Aquiares waterfall, (yes, that famous waterfall, the cover-waterfall of the 2007 Tropical Cataracts Illustrated pin-up Issue).
Famous waterfall or not, I started thinking about that scene in The Mission, and then I couldn’t stop thinking about it.
Stepping carefully, clutching tree trunks and vines so as not to slip on the path down from the coffee trees to the shimmering pool at the top of the cataract, all I could think about was Robert de Niro, the atoning slaver hidalgo, struggling up the face of a Paraguayan cataract, weighed down by his fancy Spanish armor.
The history of this, and every other continent, is replete with stories of men and woman doing brave things and crazy things, which I never would or could do. But I think about them constantly: the waterfalls I will neither scale nor plunge down, the alligators I will not wrestle, the poison arrows I will not dodge, the deserts I will not cross, the mountains I will not ascend…Why do I think so constantly about the physical challenges I shirk? Years of therapy and there is still no definitive answer. But I know that standing on a rock overlooking the Aquiares waterfall and leaning over to gaze on the plummeting cataract, I imagined my alternative self: hopping into a hand-hewn kayak, approaching the rim, catching some air and then dashing to the pool and rocks below.
So when young man emerged from the foliage behind us with a snake wrapped around his arm, I started imagining that I was not undone. 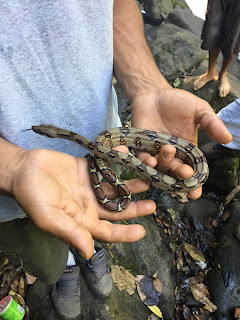 “No es venenoso,” Minor said. “And besides, it’s a baby.”
CSB asked me what kind of snake it was. I said I didn’t know, but that Minor said it wasn’t poisonous.
The young man had the snake wrapped around his arm; he very graciously he asked me if I wanted to hold it.
Minor also thought that holding the snake was an excellent idea. He told me that my nephew, Christian, had been down here a few weeks ago and very much hoped to see a snake but had not been so lucky. I assured him I would send a picture of the snake to Christian, with some sort of gloating commentary.
I asked Minor what this snake was called, and he told me the local name was acorro. This meant nothing to me, but perhaps I misheard. He said that this type of snake captured its prey and then squeezed. He used the Spanish verb exprimer, meaning squeeze, which I didn’t immediately understand.
Later, I sent a photo of the snake to my nephew and also to son-in-law, a philosophy professor who was an amateur herpetologist as a child.
My son-in-law wrote back, “Cool!  That's a red tailed boa.  I had two of them as pets!”
While the boa may – technically - not be poisonous, their bite can be painful to humans. Also, they hiss when annoyed. And of course, they constrict their prey. They squeeze until blood flow to the heart and brain is cut off. After that, they eat the prey and then spend several days digesting.

One of the best things about visiting Aquiares, a coffee finca on the slopes of the Volcan Turrialba in Costa Rica - after the verdant beauty of the rainforest, after the profligate tropical flowers, after the symphony of tropical birds, and after the food (pie of frijoles and plantains, mangos, papayas, and guanábanas) - is the bookshelf full of actual, real, good books. 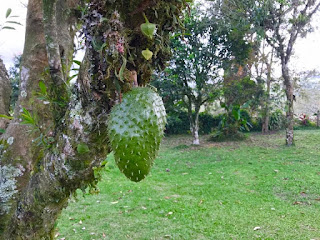 For many years, my parents made an annual odyssey to Aquiares with a group of friends, old Smithies, local friends, faraway friends; the actual, real, good books on the shelves were brought down by those friends and left there for others to read.
Honestly, the good ones were all brought down by Dorothy Monroe, a dear friend of my mother who was possibly the best-read person I have ever known or will know. When Dorothy gave you a book, it came with a note that pithily introduced you to the novel you were about to relish; when she thanked you for a book, you received a handwritten review, full of specific details and observations. Here are the frontispieces from just a few of the books contributed by Dorothy over the years. 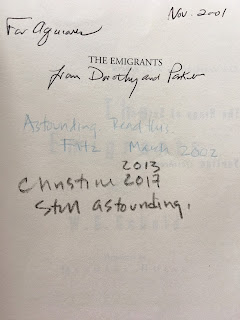 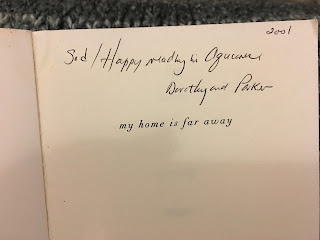 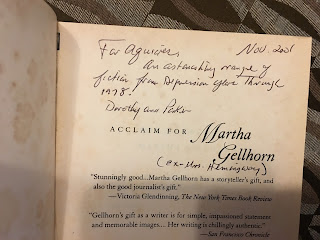 Just because we find ourselves in tropical paradise does not mean, however, that there is any less awareness of looming dementia.
Dorothy of the fine inscriptions, Dorothy of the NYRB Classics, is now in a Memory Care facility in Massachusetts. Her days are spent in confusion and anxiety; above her bed is the life size portrait of her as a young ballerina that hung above the mantle in their beautiful 19th century house. Her friend, my mother, is next door to me, struggling with jigsaw puzzles and clipping articles from the paper, articles she can neither read nor comprehend. She looks at picture books.

There is nothing I can do about the the invasive incursions of Alzheimer’s into the brains of these two lovely ladies, my mother and Dorothy; all I can do is read W.G. Sebald’s The Emigrants or J.P. Hartley’s The Go-Between, and be grateful for the choices they once made.

Posted by Christine Lehner at 10:57 AM No comments: