The Moths and the Murmuration

‘Tis (or ‘twas) the season to deplore the overuse of ‘tis, and summarize the highlights of the past year. In one of these two all-important tasks, I have fallen short.
So, having failed to produce a pithy Christmas card regaling friends and family with our adventures and misadventures of 2018, I thought I could at least bake something.

Not that most of you lucky souls will taste what I baked. It is the concept of baking that I imagined as an antidote to the lack of Christmas letter.

There I was in the kitchen, our lovely kitchen with its three big windows facing west, overlooking the field, the river, and the geologically thoughtful and imposing Palisades. In a certain cabinet I found two bars of fancy chocolate. How long had they been there? Had they been invaded and nibbled by pantry moths? Do pantry moths even like chocolate? They had not. But the question was valid, because on the way to discovering the chocolate, I came across a package of almonds that had been very much invaded and inhabited by moths. It was quite revolting, all the masticated almond crumbs globbed together with the spider-webby stuff the pantry moths leave behind. I took the whole thing outside and gave it the chickens, who love grubs and bugs and squirming larvae.
I started wondering about pantry moths. Evolutionarily, biologically, what exactly is their purpose?
I have no answer to that question.

Initially when I started researching pantry moths, I assumed my moths were the Mediterranean variety, whose ancestors, like mine, were immigrants to North America. (Also known as invasive species.) 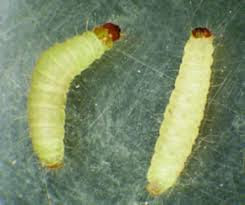 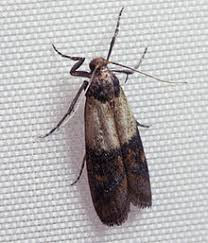 That was wrong. My pantry moths, and most pantry moths, are Indianmeal moths. Indianmeal moths are not from India. They should not be confused with almond moths or raison moths, even when they munch on almonds and raisins with gusto. They also don’t mind eating cardboard or plastic if that is the best route to grains or nuts.
One of the things I was most delighted to learn about these moths, my moths and your moths, was that the females “oviposit on the second night after emergence. This is because they require a few hours for the sperm to move from the bursa copulatrix to the vestibulum, where fertilization occurs”.
How often do you get to use the word oviposit? Not enough, in my opinion. The same goes for copulatrix.
[Yes, I know we are dispensing with such gender specific, that is to say, feminized, words such as actress, waitress and aviatrix, but I hope we can keep copulatrix. Just because. ]
And when they do oviposit, the female moths oviposit between 116 and 678 eggs, in a food source, such as my almonds or whole wheat flour. Between exactly 116 and 678 eggs. I checked three sources, both online and in a real book, and they all gave those exact same numbers for the minimum and maximum number of eggs.

Why so much about pantry moths?
Because it seems especially important, at this time of year (birthday of Jesus, shutdown of the US government, wildfires, floods, holidays that conspire to break your heart, long nights, and then, arbitrarily, a new year with a new number) to recognize the depredations of age, usage, indifference, betrayal, neglect, breakage. Hungry moths.

There I was, checking out the moth carnage in the baking supply cabinet, when the light in the kitchen changed. Nothing alarming, just a shadow passing.
It was not a shadow at all. 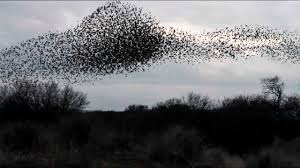 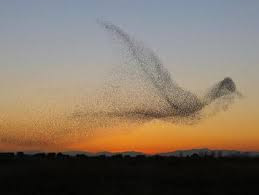 (Not my pictures.)
Outside, right in front of me standing at the window, thousands of starlings flew together from the branches of the birch tree up and over the field. They swooped together, they rose together, they dipped and swooped upward again. This, I later learned, is called “scale-free correlation”. Together they filled the sky, not completely, not as a dark blob, but as a giant pixelated moving wave. Together they curled and landed on the field, and together they alit and returned to the sky. I don’t know how long this Murmuration of Starlings lasted. They swirled and pulsated; their shape ballooned and then narrowed as if a belt were cinching a waist. They grew large and small. I didn’t have my camera, and any way, I couldn’t have captured this sky-filling avian ballet. Watch this on You Tube for an idea. For as long as they flew, ascended, curled back and dropped to the field, lifted in perfect synchronicity from the field and flew in wider circles, I watched. I felt hopeful.
Finally, they swooped northward and then flew in a wide parabola and headed southwest towards the river. I waited, in case they would circle back. But that was it, they went elsewhere.

Who are these starlings, and why do they do what they do?
For starters, starlings, like my ancestors and most of yours, were immigrants to these shores. Though my grandfather, a German cotton broker, did not arrive here with a Shakespearean agenda. Starlings did.
On a snowy day in 1860, Eugene Schieffelin, a German immigrant, released 60 European starlings in Central Park. It was his wish to introduce into North America all the birds mentioned by the plays of Shakespeare. (Clearly, the concept of invasive species was not yet au courant.) Ironically, Schieffelin succeeded with starlings, who get one puny mention in all of Shakespeare, whereas the more frequently mentioned skylarks and nightingales never adapted to North America.
When Schieffelin died in 1906, his obituary in the New York Times listed his memberships in the NY Genealogical and Biological Society, the NY Zoological Society, the American Acclimatization Society, the Union Club, the Society of Colonial Wars, the St Nicholas Club and the St Nicholas Society (Seriously. Both.) There was no mention of the starlings.

These days starlings are considered a nuisance, pests, and hazards. And of course, an invasive species.
According to the Coordinator for the USDA Airports Wildlife Hazards Program, starlings are “lean and mean. In the industry they're often called feathered bullets.”

Along with the enlargement of my vocabulary with oviposit and copulatrix, I was delighted to discover that our government supports an Airports Wildlife Hazards Program.
And so with this, I end the year, and wish you all a Happy, Healthy and Sane 2019.