Here is SQD’s convenient guide for Frankenstorm* preparation:
• First thing, create a FEMA Halloween costume that includes, but is not limited to: Foul weather gear (Blue, as a color less likely to incite panic: more likely to spread calm mastery of the situation); rubber boots with bees on them; LED headlamp; snorkel; pink onion-peeling goggles which are also very good protection against flying limbs; Strike Anywhere matches in a sealed baggie. 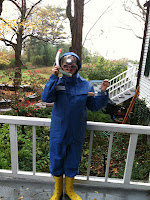 • Then bring inside the OBAMA lawn signs, so they don’t get trashed by the wind and the rain. We are very protective of the OBAMA lawn signs just now as the first one we put out was stolen, and then after we put out another one, some $%&^# had the temerity to place a Romniac sign right in front of it.
• Batten down the chicken coop, nail shut their windows, fill all their food and water dispensers to the brim.
• Run a heavy-duty electrical cord from the baby chicks heat lamps to the generator, at the ready.
• Secure all the beehives, with rocks or concrete blocks or ratchet straps. Stack all the empty supers on the back porch, tie them up and wrap the whole package in plastic. 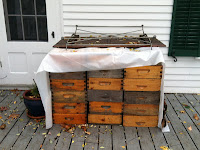 • Do every possible bit of laundry, and wash all the dishes. Run every possible appliance. Why? Because we can. And who knows what the next days will bring. Make bread in the breadmaker. [Soon I will make waffles in the electric waffle maker and squeeze something with the electric juicer that has not been plugged in for a decade. Then I will find some use for the electric curling iron.]
• Cut all the dahlias in bloom, before they are smashed to smithereens. Ditto the red peppers.
• Go next door and chain-saw the tree that fell directly across the driveway.
• Go down to the waterfront and note that already the Hudson River has flooded the park and is lapping at the base of the restaurant. And we are still hours away from the peak. 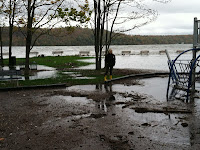 • Curl up with a good book. Light a fire with your Strike Anywhere matches. Keep your headlamp handy.


*I did not come up with this name. Thank the media.

How long has it been since I have written about a saint, any saint, in SQD? A very long time, and while there are some of my readers who have perhaps not bemoaned this hiatus, and while perhaps not a single one of you has woken in the middle of the night with a craving for a hagiographic tidbit, I am going to plunge back into the haloed fray.
This has nothing to do with the fact that on Sunday (21st) the Pope will canonize 6, or 7, depending on your source, new saints, thus rendering my compendious Lives of the Saints even more out-of-date than it already is.
It has more to do with the fact that today is the feast of René Goupil, a deaf French Jesuit who came to North America in 1639 to missionize among the Hurons, a group not known for their fondness for missionaries. However, it was the Iroquois, fierce enemies of the Hurons, who killed Goupil. The method was a tomahawk to the head, and on account of that dispatchment, he is the patron saint of anesthesiologists as well as patients who receive anesthesia.
This remarkable – is it literal or magical? – linkage-giving-rise-to-patronage made me want to suggest a patronage group for another of today’s saints: Peter of Alcantara. He was a 16th century Spanish friar and until today’s exciting discovery, I only knew him as a friend and mentor of Teresa of Avila. Early in his monkish career, Peter was put in charge of the refectory at his monastery. After six months of his regime, the other monks finally complained that they had not been given one piece of fruit in all that time. Peter replied that he hadn’t seen any fruit. A fellow monk directed his eyes just slightly upward, and there were grapes and apples and figs hanging in profusion. 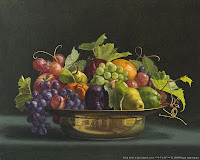 Peter’s taste buds had not felt the lack. Monks, as we all know, have a great sense of humor, and once for fun they gave Peter a bowl of water with vinegar and salt and told him it was soup. He never knew the difference.
Based on this story, I am recommending to the Vatican that Peter be made the patron saint of school cafeteria workers who, no doubt, need all the help they can get.
St Frideswide, an 8th century virgin, is the patron saint of Oxford, England, but that is never here nor there. Her story gets interesting about 500 years after her death, when England was in the throes of reformist zeal. For those hundreds of years, Frideswide’s relics had been resting undisturbed in Oxford. Then in 1561 came Calfhill, of whom even the laconic Alban Butler writes: “[he]went to such trouble to desecrate them [Frideswide’s bones] that it would seem he must have been insane with fanaticism.” For the purposes of his nefarious desecration, Calfhill dug up the bones of an apostate nun (She had married a friar) and mixed them up with the bones of the virginal Frideswide, and then reburied the mélange back in the church.
This performance piece was written up in Latin and German, and given the rubric: “Here lies Religion with Superstition.” History does not tell us what Calfhill did with the rest of his life, nor the manner of his death.

Posted by Christine Lehner at 11:56 AM No comments:

Memo for the next debate

The following are subjects that were not addressed in the presidential debate that I would have liked to hear addressed and that, if addressed and discussed - even in the most bellicose manner - would have enabled many more undecided voters to choose their candidate, and additionally would have elevated the risibility factor of the debates several notches:
What does the US government intend to do about the pesticides that are likely responsible for hundreds of millions of honeybee deaths, the neonicotinoids?
What do the candidates suggest we do when our chickens stop laying eggs and just sit around all day eating their fancy organic food and roosting?
What is the candidate’s position on canonization?
Has anyone noticed how the US is plagued with a short and long term memory loss so extreme that an individual thus afflicted would be diagnosed with advanced senile dementia?

If any of my readers has would like to pass these questions on to the moderator of the next debate, please do so with my blessing.
Posted by Christine Lehner at 12:38 PM No comments:


1. This cathedral, at the De Young Art Museum, is made entirely from guns and bullets, and comes complete with a tooth and a spinal bone. (These are my pictures - better ones can be found here: 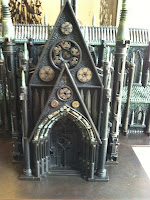 2. Going to the supermarket in Santa Cruz, you are greeted with this sign: 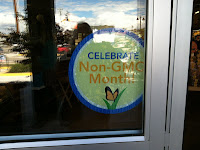 And inside you can buy this honey: 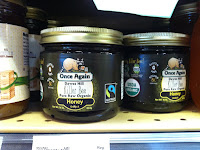 3. Actually it should be three things. This tree at Golden Gate Park. Several other trees at GGP. California is blessed with trees. 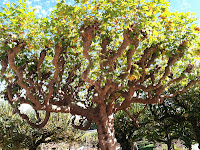