Yesterday when I went next door to see Mom, she was lying down on her heating pad and looking at The Other Wise Man. She told me she was reading it, and asked where it came from. She showed me the inscription to "Christine and Jeffrey" and asked me who they were. 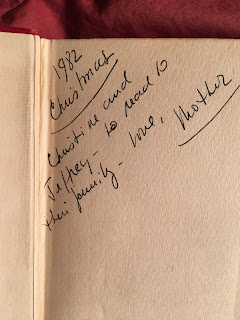 I told her I was Christine, and Jeff was my late husband. I told her I had brought the book over for her, and she could read it all she wanted. Then I went into e next room to gather up all the random solicitations that had arrived this week.
Back in her bedroom she informed me that she was reading a certain book, and brandished The Other Wise Man. 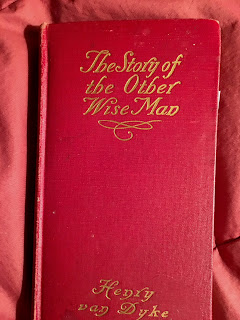 She asked me where it came from and showed me the inscription. I told her what it meant. I reminded her that when Dad was alive we used to read The Other Wise Man aloud on Christmas Eve.
“Who?” she asked.
“Dad,” I said. “I mean, Philip. Your husband. My father.”
She said, “Of course I know my husband.”

In the living room I discussed some logistics with Shedley. Mom followed, carrying the book, and told me she had been reading it, and showed me the cover and the inscription. “Do you know who these people are?” she said. I told her I was one of them. Not for the first time I wondered why -in order to make these interminable exchanges more interesting - I don’t invent other answers, or as Kellyanne Conway would say, “Alternative Facts.”

Christine and Jeffrey could be friends who were lost in the Amazonian jungle and bequeathed their library to me. I had to build new shelves just to accommodate their vast collection of Henry van Dyke.
Or, I could have found the book at a used book sale in Ogallala, Nebraska, where my car had broken down and I ended up spending three delightful days awaiting its repair and going to garage sales, yard sales and used book sales.
Or, I could have no idea of the book’s contents.
Or, The inscriptees could be my neighbors, from whom I had borrowed the book several years ago. My failure to return the book in a timely fashion had permanently damaged our former neighborly friendship.
Jeffrey could still be alive. He could still be my husband. The tall, kind man who takes my mother to church every Sunday could be an interloper.

Yesterday I stuck to the facts as I knew them. When Mom asked me where I had spent the morning I told her, “At a meeting about Alzheimer’s.”
“That’s nice,” she said. “What is Alzheimer’s?”
“It’s an illness,” I said. “That attacks the brain.”
“Why would you do that?” She asked. Shedley gave me one of her funny looks that I interpreted to mean: How are you going to handle this one, smarty-pants?
“Your mother had Alzheimer’s, and now you do, and I want to learn as much as I can about it.”
“There was nothing wrong with my mother,” Mom said. “What did you say I have?”
“Alzheimer’s.”
“I’ve never heard of it,” she said. “What does it do?”
“It attacks your brain. It’s why you can’t remember things.”
“Oh.”
Shedley rolled her eyes at me. Just how much of a jerk was I?
“I brought you some nice chocolates from Maine,” I said. “Your favorite daughter sent them.”
“Who is that?”
“Brigitte!” Years ago, Mom used to get amusingly agitated whenever I referred to one of her children as a favorite, generally someone who was not in the room. She always responded indignantly that she had no favorites, loved us all equally, blah blah blah. I miss the Pavlovian certainly of that response.

Later, when I related to him the highlights of my day, CSB, the tall, kind man who takes my mother to church every Sunday, did not think much of my referring to Alzheimer’s at all with my mother. “Do you really have to tell her the truth about your day?” he said. Could he have been recommending “Alternative Facts”?


Just in from the Hastings on Hudson Weather Alert email Advisory:

WARNING: NO WALKING OR SKATING ON SUGAR POND. THE ICE IS NOT THINK ENOUGH FOR ACTIVITY!


Meanwhile, out between us and Broadway, the animatronic ungulates are frolicking. 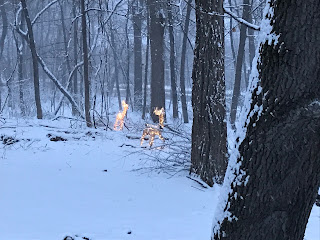 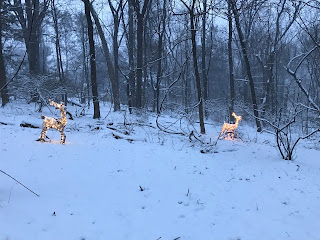 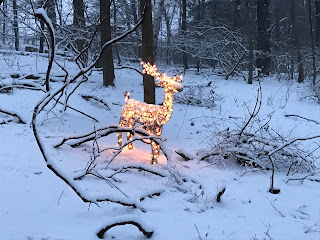 Posted by Christine Lehner at 3:59 PM No comments:

On reading and loving Shirley Hazzard

A week or so before Christmas I turned to the Times obits, and read that
Shirley Hazzard had died. Just like that, at the kitchen table with half a grapefruit and last night’s potatoes, I was flooded with sadness and some kind of inexpressible longing.

The Transit of Venus was not her first book, but it was the first book of hers I read. It came out in 1980 and won an award. Did it change my life? That seems a bit melodramatic, but reading it then felt like walking off a cliff, landing in a Borgesian library and having it all make sense. It felt like reading a book in a newly-acquired language in which I was suddenly fluent. I loved everything about the novel. Hazzard could surgically dissect the conflict between a character’s intentions and his emotions, without telling us what she was doing. I loved the sentences that trailed off into the unsaid or unsayable. I loved the acquaintance with sorrow. In The Transit of Venus, much is known and much more is hidden, or coded. For the first time in my life, I wrote a fan letter to an author. I don’t recall what I said, but I suspect I gushed.
Shirley Hazzard wrote back, graciously, on pale blue stationary.
At the kitchen table, I recalled that I first read The Transit of Venus when my life seemed to be disappearing in front of me, when everything I trusted had become untrue. Basically, I was a mess and though I can’t claim that novel fixed my personal clusterfuck, it was an opening. Against all the obvious wisdom, I even longed for another girl child so I could name her Caro.
So it was about 35 years since I read the book, and I wondered how I would find it now. It was still on my shelf, between Hawthorne and Heaney, still in its pale blue dustjacket. 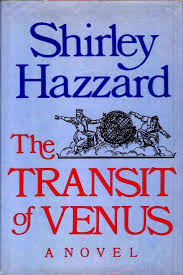 And yes, it remains one of the best books I have ever and most likely will ever read. Just before Christmas I quickly bought several copies – in paperback now – to give away. I plan to buy several more.
Hazzard’s next, and last, great novel is The Great Fire. I read that in 2003, and this time I managed to meet her.
That is, I was a member in those days of the Trollope Society and at the annual dinner Shirley Hazzard was to be the keynote speaker. It delighted me to learn that, like me, Shirley Hazzard enjoyed Trollope, and she admired him enough to discourse in public on Lady Glencora and others. So I paid some ridiculous sum of money, dressed up and went to the Knickerbocker Club one night, for the sole purpose of speaking to Shirley Hazzard and telling her of the extraordinary coincidence (and yes, I know there are no coincidences) that one her characters, Benedict Driscoll, was afflicted with a rare and debilitating disease called Friedrich’s ataxia, and that I, a mere reader of hers, was extremely devoted to a certain cousin-in-law who also suffered, and lived with, Friedrich’s ataxia. I had written about him in a short story, about his profound connection to his mortality and his love of bats. (He was a chiropteraphile, a word we both relished.) Like Benedict Driscoll, cousin Colby had a wide-ranging mind, a sly imagination and knew that death loomed everywhere. My children grew up joyriding with Colby on forest trails in his electric wheelchair. Colby could be reckless. He had attached to his electric wheelchair a high-pitched whistle in case he ever broke down in the woods and was being eaten alive by mosquitoes. One of the reasons he loved bats so much was that a single bat can eat up to 8000 mosquitoes in one night. I told all this to Shirley Hazzard.
And now she has died. She outlived her beloved husband by 20 years. I read in the obit that there were no survivors, that she had lost touch with her only sister years ago, and that she had “struggled with dementia”. I thought about that use of the word “struggle”. How people are said to “battle” with cancer, but apparently they “struggle” with dementia. In our back yard, in her Red House, is that what my mother is doing? Struggling with dementia?
Though I would wish dementia on no one, I realize that - while rereading Hazzard’s novels – I derived a strange and somewhat perverted solace in recognizing that her wonderful mind, like Iris Murdoch’s, like my mother’s, also struggled with dementia.