Gloves in the Afternoon


I realize it is the last day of the year, an appropriate time for enumerating the many horrors of the past year: the insults to cordial discourse, the natural disasters, the national embarrassment, and the undoing of so much.

Let the lamentations go elsewhere. Here, I am just going to tell a story of Gloves in the Afternoon.
It was a rainy, dreary afternoon with #1 grandchild, and we happened upon the gloves.

We are all well-acquainted with the trope for more refined times: back when women wore gloves. Mostly white gloves.
I have mixed feelings about gloves. I tend to get cold fingers, and so I do like gloves for keeping my fingers warm. However, the most elegant gloves don’t keep your fingers all that warm. Fuzzy mittens are much better for insulating the digits.

But it was the stash of gloves that entertained us all afternoon. Both my grandmothers wore gloves, also my Aunt Madeleine, gloves for all occasions. They kept their gloves, neatly folded, in tissue paper, in special boxes designed for glove storage. As they died, sequentially, my mother kept their gloves, still neatly laid out in tissue paper, in special boxes. When my mother finally moved out of the Orchard a couple of years ago, we found dozens and dozens of pairs of beautiful gloves: soft leather, silk, satin, lace, softer leather, embroidered, and painted. We had no idea what to do with them. Aside from being very old and delicate and not designed for gardening, they are also quite small. How is it that our grandmothers and great aunt had small delicate hands, and I have arthritic indelicate hands? How did they keep their hands so small and delicate, while mine have grown lumpy and askew? That is something I don’t think about very often, but most likely too often. 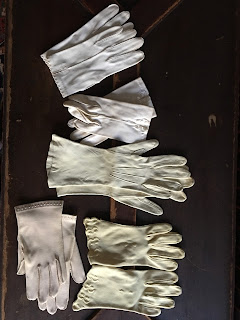 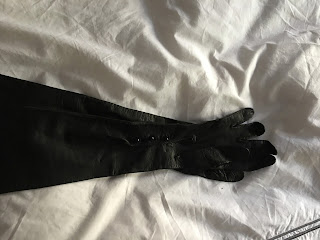 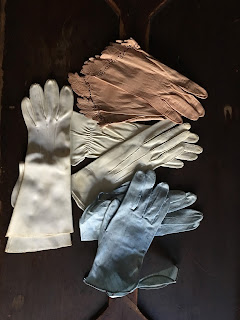 Leda had no qualms, no hesitations, no mixed feelings about these gloves. She loved them without reserve. Each pair of gloves she put on – and yes, she has long slender fingers; she is also 11 years old – was transformative. She gestured with her hands like a dancer. She tilted her neck and rested her head upon a hand clad in ivory kidskin. She held her hands outward as if to be kissed or simply admired. Each pair of gloves called for a different situation or festivity. Pale beige leather ones would be perfect for driving along the Corniche in southern France. For waving farewells from the deck of your ocean liner as you steam out of port: white ones with embroidered flowers. The long black gloves would be just right for a champagne toast on a mountain top. The ivory crochet gloves were clearly meant for royal garden parties. So when Leda tried on the black gloves with lace cuff, and waved them around suggesting curlicues in the air, and announced, “I can wear these to my great-grandmother’s funeral,” I could only admire her sense of decorum. 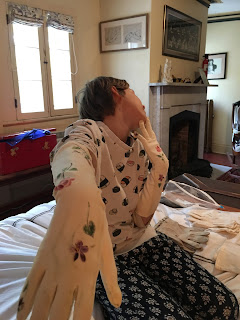 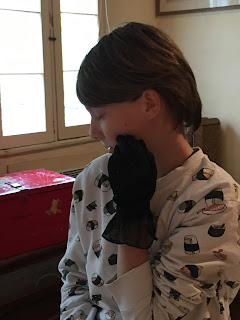 At a young age, she understands that certain clothes can only be worn at certain times, and also that wearing the right clothes can give the wearer consolation, a mantle against grief. Is it possible that Leda knows of, or has intuited, my mother’s lifelong insistence on wearing all black, including undergarments and jewelry, to all funerals? Even in New England where such things are considered over-dramatic and more suitable for tropical, immoderate countries? Was it possible that Leda was present when I had to dissuade my mother from wearing a black mantilla to my ex-husband’s funeral, in a Unitarian church, a profoundly New England venue?

My mother was heading for the door when I saw the black lace atop her head. “Mom! You cannot wear a black mantilla. We’re going to a Unitarian church for Christ’s sake.”
“I don’t see why that should affect what I wear. Jackie Kennedy wore one.”
“She was the widow, Mom. You’re not the widow. You’re not the First Lady. There are so many good reasons not to wear a black mantilla I don’t know where to start.”
“I think it would look very nice. It’s Belgian lace.”
I begged. “Then just for me, please. Do not wear the black mantilla, please. It’s not appropriate. It is actually super-inappropriate. He was your ex-son-in-law. I can promise you that his own mother will not wear a black mantilla. She will not even wear all black. She’s a WASP. If anyone wears a black mantilla, it should be me.”
“Would you like to borrow it?” she said.

For Leda to wear black silk gloves, with a lace cuff, to her great-grandmother’s funeral (still in the unknown future) would be entirely appropriate. It would be an act of love.

Happy New Year. May you always have the right gloves for the occasion, in 2018 and beyond. 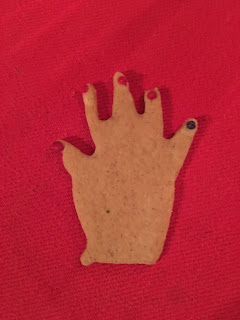 This is not a glove.