There are few things in life I enjoy more than fondling books, dusting books, taking books off the shelf, and then re-shelving them in alphabetical order. This needs to be done every few years, on account of new acquisitions, de-accessioning, and the inevitable march of disorder that attacks the bookshelves while I sleep. I welcome the occasion.

Things have been difficult of late. How many times in an afternoon can you explain to your mother what the word T-O-N-S-U-R-E means? She was sitting in her favorite chair, that was previously your father’s favorite chair, by the fireplace, reading a large picture book about The Ghent Altarpiece.
Several years ago my sister and I went to Belgium with our parents, in January. Aside from the fact that the weather is wretched and it gets dark at 2 in the afternoon, everything you want to see in Belgium is closed in January. We took a train to Ghent in order the see the Ghent Altarpiece, in January, because I had long harbored a desire to see for myself, in real time and space, the weird expressions of the singing angels. And of course, St Ursula. I always want to see St Ursula. St Bavo’s cathedral was closed that day in Ghent in January. The chapel with the altarpiece would remain closed for the month. You can only console yourself with moules frites so many times. Thus, I have a large book with many details of the altarpiece. Until my mother’s revelations by the fireside, I was unaware of the frequent references to tonsures. Or maybe it was one reference to one tonsure, encountered again and again. 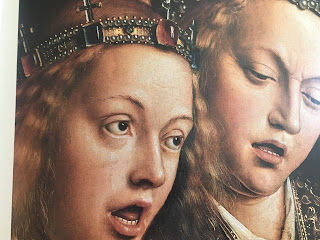 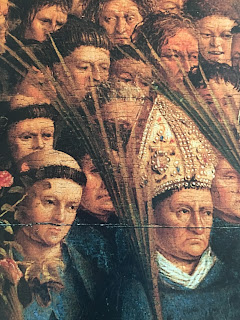 So, in lieu of more drastic measures, I decided it was time to reorganize and re-alphabetize my books. Not all my books, just what I think of as the indispensable ones; only fiction and what was formerly called ‘belles lettres’ and might now be called ‘creative nonfiction’ gets alphabetized. Other books are organized by topic, and that is not a simple thing. Should a biography of Gertrude Bell be placed with books of travel and exploration (in the downstairs guest room), or in the biography section (in the second floor hall)? Likewise, where would a Life of Saint Teresa of Avila belong: in the aforementioned biography section, or in the hagiography department?
As for the hagiography, for quite a while, a few years past, as CSB will bemoan with bewilderment, hagiography was my chief subject of research. My collection of the lives of female saints, with special attention to mystics of the middle ages, is, I am sure, the largest in Hastings if not the whole county. Yet even that designation presents its categorical difficulties: should the life of Lydwin of Schiedam be placed with the mystics or the sainted anorexics? Likewise, there is significant crossover between the stigmatics and the mystics.
I could go on. But CSB will be pleased that I do not.
As soon as I started, with the A’s, I was hurtled back in time, with Walter Abish, who actually wrote a blurb for my first novel, Expecting, back when I very likely had no idea of the importance and trafficking of blurbs in the world of bookselling. New Directions published the book. They also published Walter Abish’s books, and so, without any more ado, I found his blurb on the back of my novel. I recommend his Alphabetical Africa.
One of the ways I console myself for the inevitable is knowing that when the time comes, I will be able to figure out what writers I have loved, craved, read and admired profligately; all I will have to do is look at my bookshelves. Calculate the linear shelf inches.
You would be correct to assume that I love the writing of Paul Auster; the evidence is right there, between Austen and Azuela.
Thomas Bernhardt gets maximum linear inches in the B’s. I was introduced to Bernhardt by Bine Köhler, from whom I learned so much about European writers, looking at art, listening to music and how to live. I also learned about egg hats in a Berlin pensione. I had been reading his books for decades before I finally went to Vienna with Bine last winter, and saw firsthand the country so reviled by its greatest writer. I, of course, loved Vienna and could easily have spent the rest of my life lurking at the Café Grindl. 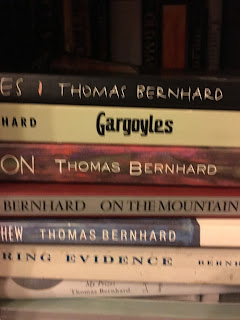 Almost as much space is devoted to Ludwig Bemelmans: such is the democracy of my bookshelves. Who does not adore Madeleine who lives in an old house in Paris? But her books are upstairs in the children’s bookcase. Down here we have his so-called adult books, Hotel Splendide, Dirty Eddie and How to Travel Incognito. 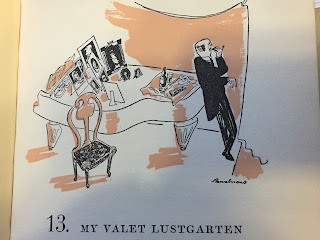 There are more books here by Louis Bromfield than is reasonable, and some will be purged. But I will keep The Rains Came, a torrid page-turner set during a monsoon in Ranchipur, India. Along with James Hilton’s Lost Horizon it was a favorite book of my late father-in-law. We knew they were his favorite books because he spoke of them often; they were in fact the only books he ever mentioned. I always assumed they were connected to his war experience in India, but is that true? Were Americans even in India during the war?

Before departing the B’s, there is William Burroughs’ Naked Lunch, the book I read when I was 19 at the behest of Jeff, my boyfriend, later husband. He gave it to me in order to combat my bourgeois tendencies. I was shocked, as presumably was intended, and confused. After Jeff died more than five years ago, I reread Naked Lunch and finally, at last, appreciated its brilliance. But was it too late?

Every letter has its triggers and madeleines. There are so many more to come. Let’s just say that the other day, while I was blissfully shelving my books, a certain brainy friend was visiting and I asked him and CSB to name women writers whose surnames begin with W.* Our brainy friend (he knows who he is) dredged up (barely) Edith Wharton. CSB, bless his heart, mentioned “that writer whose house we visited.” Bingo: yes, we visited Eudora Welty’s house in Jackson Mississippi on Nothing in Common goes South Road Trip #1. There was a sign on the door requesting that no guns be carried inside. Upstairs, and all over the house, visitors could still see Welty’s piles of books, not only on her shelves, but upon beds and chairs. I could have moved in. Without my gun.


*In my collection alone: Walbert, Walker, Weber, White, Williams, Winterson, Wesley, Weldon, Wolf, Woolf, Wroe. It may be - thus far - the only letter of the alphabet for which I have more novels by women than men. Actually, no. I think O is another one. I will check, count, and measure.

Posted by Christine Lehner at 11:12 AM 4 comments:

A little bit about Irony

Last year on this day we were in Vietnam. The day before, while visiting the beautiful ancient capital of Huế, I gleefully (though somewhat to CSB’s chagrin, because he finds masks creepy & thinks I tend to overdo things) posed next to ancient statues wearing my Happy Hilary mask, so confident was I of the following day’s victory and all those newfound opportunities to refer to Madam President. 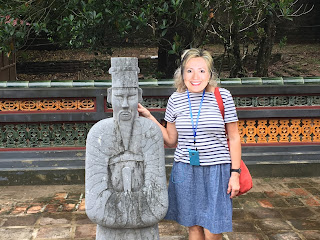 While in Saigon, otherwise now known as Ho Chi Minh City but more or less universally still called Saigon, I had located the house* where my Belgian grandparents, my mother, and uncle had lived from 1939 until 1941, when they were evacuated, along with most European women and children, as the Japanese army was invading. And quickly. Because she was a Belgian woman, my Bonne Maman had never voted because women were not granted suffrage in Belgium until 1948, and from 1929 onwards she lived in Egypt, Indochina, California during the war, then Egypt again. She finally came to the US in 1956 because that was where all her grandchildren were. (Such is the narcissism of grandchildren; someone else might have said she came because her children were here, married to Americans.) My grandparents never became citizens, preferring to remain “Resident Aliens,” and thus ensure they could enter the Belgian section of Heaven – Bonne Maman told me this, seriously, somewhat.
While visiting Vietnam, I thought a lot about my beloved grandmother, who never voted; I had weeks earlier cast my absentee ballot for Hillary, and eagerly anticipated the election results.
We all know how very wrong that went.
Which is a long way to introduce the question of irony.
Was it ironic, my posing in a Hilary mask next to a statue of a bodyguard of Emperor Khải Định, whose first wife left him in order to become a nun?

I am pondering irony these days.
My mother received in the mail a “Certificate of Recognition” from the Alzheimer’s Association. She handed it to me because, sometimes, when she remembers, though remember is no longer the correct word, she gives me her mail to ‘deal with’. How ironic is that? The certificate recognizes her “extraordinary commitment to the fight against Alzheimer’s disease.” If so, it is a fight she has lost. 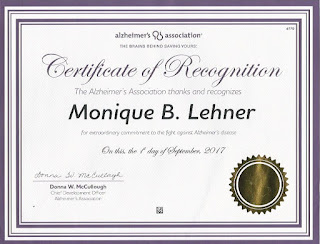 Presumably, she received this ridiculous ‘certificate’ because, back when she was still writing checks, she sent some money to the AA and they would like her to send some more. To this end she receives countless solicitations at her new address in Hastings, even though I have never given any organization her new address. It is a miracle of the modern phenomenon of annoying requests for money.
Irony is generally defined as a situation that is not what it seems, that differs from what was expected. Irony is often used for comic effect, but at times is tragic. (See the Greeks. See me sporting my Hilary mask.) The word comes from the Greek, eirōneia for ‘simulated ignorance.’
Another chapter of the Azheimer’s Association sent my mother Christmassy address labels, presumably to affix to the Christmas cards she is no longer capable of writing or sending. They also have her address slightly wrong. What part of that is ironic?
Does it differ from the irony of the multiple books stacked on her nightstand about how to prevent memory loss or how to improve your memory?
Or how does it differ from the irony of me buying a book at Costco this morning called The End of Alzheimer’s, even though I have read lots of actual science books about Alzheimer’s and have spoken with doctors and visited labs and attended seminars? And I know damn well that there is currently no cure for Alzheimer’s and I even know that most of the things we are told can stave off the advance of Alzheimer’s, like practicing yoga, speaking multiple languages, and eating healthy, are exactly what my grandmother and mother did all their lives.
Maybe that is not so much ironic, as delusional.

In literature, I love irony. Also in life. Irony makes life interesting. If I refer to someone as living in an “Irony-Free Zone” I do not mean it as a compliment.

On the other hand, this morning I woke up to un-ironic, good news from the elections, locally and in various other states.

* This is true. I knew they had lived at 216, rue Pelerin, and so with the help of an old map and a charming man at our hotel, I figured out that rue Pelerin is now rue Pasteur, and we went to that number to find that there was a house, that looked just like the house in the picture of my mother looking coy in the front yard. It was still there and was now Soul Music & Performing Arts Academy (SMPAA). On the tile floors where my mother once roller-skated indoors (so she claimed) Vietnamese children now dance hip-hop.
Posted by Christine Lehner at 4:57 PM No comments: