What you did in Georgian Bay 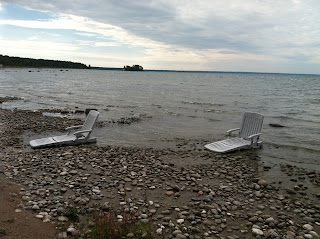 First you crossed the border at the Thousand Islands Bridge, in the company of friends you have known for 44 years, 34 years and 10 years, respectively; each of you were transporting the allowed two bottles of wine each, and then some.
You took long walks and took pictures of dead sea gulls on the beach. You do not recall ever seeing quite so many seagulls, dead or otherwise, on the beach. 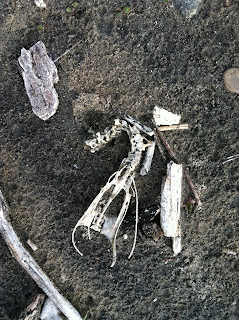 Upon arriving at the cottage at the end of the long sandy road off the fourteenth concession, the first order of business was to organize the disposal of organic kitchen waste. Various methods prevailed in the past, including the collecting of organic waste and putting it at the end of the road for weekly collection, or tossing the organic waste into the general waste bin which is then putting at the end of the road for weekly collection, or collecting the organic waste and then tossing it into the woods which surround the cottage. This last was proscribed by Becky’s sister because the food scraps in the woods attracted bears and other mammals. Not among the previous methods was the gathering of organic waste and incorporating it in a compost bin to be used in the fertilization of a garden. This is because the area is sandy and wooded, and besides, no one stays long enough at the cottage to tend a garden. But it seems important to allude to that fourth possibility to make clear that fourth path was briefly considered, before its outright rejection.
In order to decide on the method of organic waste disposal to be rigorously followed by every inhabitant of Addison Beach in the township of Tiny, a meeting of the Addison Beach Property Association was been convened, and this took place in Becky’s cottage on the second day of your group visit. Meanwhile, a fifth friend has arrived separately, driving herself and the plenty of her vegetable garden all the way from south of the Mason-Dixon line.
As this is the first time in her entire lifetime history of coming to the cottage she has hosted such a meeting, and also because has a self-diagnosed social anxiety disorder, Becky is in what is variously described as a tizzy, a lather, a froth and a flap. In order to allay the ravages of the soi-disant S.A.D., four of you - which is exactly three more than necessary - proceed to climb the attic ladder, remove the trapdoor that rests flush with the ceiling, admire the wooden boxes in the attic, bring down a sufficient number of matching mugs and then struggle to replace the attic’s trap door in its allotted slot. (The word struggle here is not used cavalierly.) You place napkins and spoons in a wicker basket specifically designed for that purpose. You arrange a selection of tea bags in a bowl. You artfully arrange Peek Freen cookies on a blue platter. You rinse grapes and put them in another bowl. You search every cabinet for the sugar bowl, and then fill it with sugar. You rearrange chairs inside the house as well as on the deck. Becky is unsure whether the assembled residents will want to sit inside or outside and so she wishes to be prepared for either eventuality. It does not occur to her that, as hostess, she is quite within her rights to make that determination. Then the four of you are exiled to distant parts while the meeting transpires.
Two and half hours later you reconvened, and learned of the group’s hard won decision. Identical matching green buckets, emblazoned with the slogan Simcoe County, For the Greater Good, have been procured for every household of Addison Beach in the township of Tiny, in order that every household will gather all their organic waste in plastic bags of the correct size, and every Monday morning that waste will be collected by township employees. If Monday falls on a holiday, the waste will still be collected, and the township employees will be paid time and a half. A pressing question was whether animal bones were to be included with the organic waste, and you were a little surprised to learn that yes, they are to be included.
Only three of the freshly-washed-and-matching mugs were used by the assembled cottagers, and the artfully arranged cookies were not touched. But they will not go to waste.
As jointly decided by the group, you read the “assigned reading”: Edna O’Brien’s memoir, Country Girl. The book lurches from lyrical evocations of her childhood in Ireland, her mother’s love and fury, her first marriage and the end of her first marriage to tedious chapters stumbling from one party full of dropped names to another party full of dropped names. And you discover that, while you like gossip, especially lurid gossip, as much as the next dirty-minded individual, this stuff is actually boring.
You argued about Jamaica Kincaid’s novel, See Then Now, which may as well have been a memoir. While some of you enjoy her writing style more than others (you, for instance, love it), the argument centered on the assertion that hate could be the obverse of love in a marriage gone wrong. Some of you felt that such an assertion was altogether too harsh and forwent finishing the book.
You cooked fresh vegetables from your gardens in Hastings and Lexington, Virginia. You ate fresh corn and wild blueberries from the fields of Ontario.
Just once you crossed the sandy verge and went onto the neighbor’s porch and logged onto their Wi-Fi in order to look up the depth of Georgian Bay (maximum depth= 540 feet, average was impossible to find) and Lake Huron. (Maximum depth=750 feet; average depth=195 feet)
You read about the Group of Seven and tried to imitate them. Unsuccessfully. 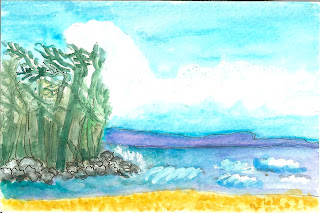 The Island no longer an Island, by me,not Group of Seven, 2013
In The Art of Landscape Painting, 1941, which belonged to Becky’s maternal grandmother, Rebecca Kynoch, you read about the correct way to paint clouds: “There is nothing more unsatisfactory than a picture of clouds in a landscape where the subject has not been under the technical control of the student who painted them. Clouds need as much designing as a good carpet pattern.” You also read that: “It is not advisable to paint a naturalistic picture of clouds on a sky where the tone value is the same all over.” 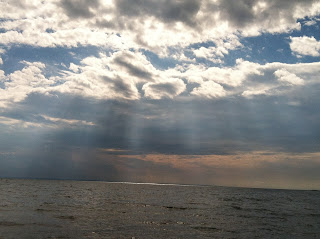 Becky shared with you several of he Six-word memoirs she created to describe some of the men she encountered during her brief adventures on Match.com. One example: “Not toned, not trim, Not sixty-four.”
At lunch one day you parsed the French recipe on the packet of spices Lilla had brought with her from France. What does it mean to “Faites revenir les courgettes”? Lilla lives in Burgundy and you spoke French as a child with your grandmother, but neither of you can figure this out. Do something to the zucchini? Bring them back? From the dead? Even sans translation, the Tatin de legumes au chevre frais was quite delicious. You take back every unpleasant thing you ever said about English cooking. (You have since availed yourself of Google Translate and not too shockingly, Faites revenir les courgettes means Sauté zucchini.)

You walked up and down Addison beach taking pictures on your cell phone of clouds and the aforementioned dead seagulls, and listened – often several times to the same passage – to The Pale King by David Foster Wallace. You were thrilled, awed, flummoxed and compulsive. You pondered from every angle how it was possible, brilliantly and exuberantly possible, to write an exhilarating novel about the Internal Revenue Service. You considered that if such a thing is possible – admittedly by a genius – perhaps you (not a genius but a bulldog) should be able to write a moderately interesting and occasionally tragi-comic novel based on the demise of the American textile industry.
In the evenings you all drank copious amounts of wine and read aloud, though nothing about the American textile industry.