Nothing in Common goes South, Part 2, The last day


There is always something unimagined. And then there is a billboard by the highway. Driving through North Carolina I discover the existence of Actors, Models & Talent for Christ. (The AMTC vision is to see “the Great Commission of JC fulfilled in film, fashion, music and theater.”)

We spend the night in Petersburg, because that as far as we get. It is my last night for communing with William Shatner and I am happy to report that we remain BFFs. Though the night clerk at the Hampton Inn should seek other employment, perhaps as an enforcer for a Russian oligarch, that is how charming he is. 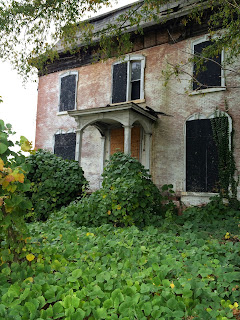 While we might have predicted the plethora of decrepit but lovely houses, I had no idea about Pocahontas Island. Native Americans lived upon this peninsula into the Appomattox River more than 8000 years ago; more recently, it was the largest settlement of free blacks in the country. It is early Sunday morning as we drive around, and like early Sunday mornings in Brooklyn, it appears that everyone is still asleep. Many of the houses are covered with fine print, telling stories, bearing witness. 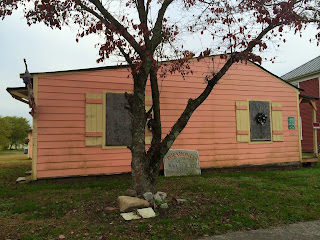 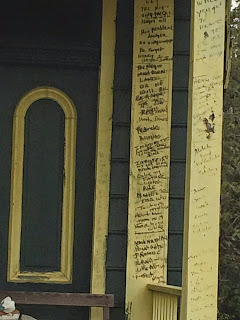 Then we are on the way to Manassas, and sandwiched between a billboard for webuyuglyhouses.com and a billboard advertising the best exterminators in the county, is this message: HOLY BIBLE. INSPIRED. ABSOLUTE. TRUTH. I appreciate the emphatic use of periods.

Manassas is the site of the Battle of Bull Run and also the Second Battle of Bull Run. These are the normal and appropriate things to know about Manassas. But just in case there is more, we start Googling; really it is our last Googling of the trip, our swan song of Googling and this is what we learn. Among the Notable People who have lived in or were born in or passed through Manassas, are John and Lorena Bobbitt.
Lively conversation ensues. Yes, of course we remember the notorious case of John and Lorena Bobbitt but did she chop it off, or bite it off? And then what happened? There is far more to the story. She chopped it off and threw it from her car window. But here is the amazing thing – later it was found and re-attached. (The surgery took 9 ½ hours.) The imagination does somersaults.
That however was not the end of the Bobbitt’s. John later played in a band called “The Severed Parts”. The band failed, not surprisingly. He also appeared in several porn films. Sadly, their titles were likewise unimaginative, never straying from the obvious.
From Manassas it is straight north for us, home to Bruno and the chickens. Home to the very delayed appearance of these events in SQD.

Nothing in Common Goes South, PArt 2, Day 13, the penultimate day


Years ago we saw a documentary film about a man in South Carolina, who, with no formal training, little money and rejected planted material, created a remarkable topiary garden in his small plot of land.

Now his garden has a dollhouse/public restroom donated by Coca-Cola. 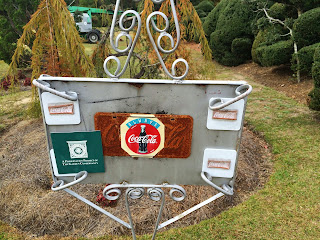 The man is Pearl Fryar and his story is well-told in the documentary and on his website.

When I saw the film and realized that Pearl lives in Bishopville, SC, I thought, Great, next time I am in Spartanburg for a business meeting, I will scoot over to Bishopville and check out this amazing garden. That was before I look at a map of South Carolina and realize that it is 147 miles between the two cities, and driving takes 2 hours 28 minutes, assuming you don’t stop every few minutes to take picture of a Jesus billboard. Which is not a safe assumption, given my lack of resistance to temptation. 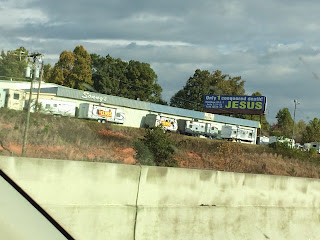 We arrive at Bishopville in the evening and, I am sorry to report, eat very badly, and then find a no-tell motel. In the morning we breakfast at Waffle House on the Sumter Highway, and note that it has topiary plants out front. 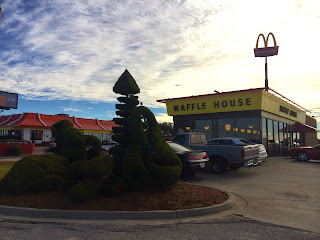 Later we will learn from Pearl that he and the Waffle House have a warm relationship.
You could almost miss Pearl’s garden and house, an ordinary bungalow on a flat suburban cul de sac, until you realize that every bush, every shrub, every tree, every living thing surrounding the house, has been clipped and shaped and molded and created. 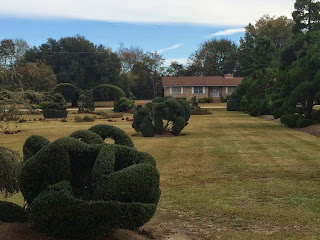 We park the car and start wandering around. Pearl soon arrives driving his John Deere golf cart and drinking his Waffle House coffee. Pearl is very chatty. Pearl will tell you his life story, Pearl will sing praises of his employer, Pearl will advertise the American dream, Pearl will promote education, Pearl will wax eloquent about his vision of a garden. We had a great time. Pearl’s garden is worth traveling 147 from Spartanburg or other miles from elsewhere. And if you drive past Watford’s BBQ without stopping, that is fine as well.

One of the shticks of Nothing in Common goes South, in fact the original - the seminal - shtick, was that we were going south so that CSB could go to Nascar races, and I could visit the childhood homes of great American writers. Shall I elaborate all the ways that shtick has become more conceptual than reality? Clearly something has gone awry, because until today we have not seen a single Nascar race, while I have visited the homes of William Faulkner, Eudora Welty, Thomas Wolfe, Flannery O’Connor, along with their graves.
But that is about to change. Today we are driving along SC-34E and right there is an exit for the Darlington Raceway, situated on the Harry Byrd Highway. CSB is not even excited, which is suspicious. Was the Nascar shtick a ruse all along? And if so, for what?
But I am excited. I have never seen a Nascar racetrack and here it is, fallen across our seatbelts and into our laps. I quickly dash across three lanes and exit.
You can read the history of how Darlington Racetrack was built on cotton and peanut fields, and how Farmer Ramsey’s minnow pond was saved, here.
There is no actual race going on today, but apparently (for a fee) you can get in line and then get a ride around the track in a racecar driven by a race driver. There is not enough Dramamine in the world to make this a good idea. 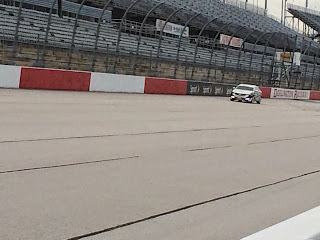 There are also on display hundreds of lovingly tended vintage cars and their owners, generally less well tended than their vehicles. I am sorry that I neglect to take a picture of the entirely turquoise 1962 Corvette, and when I say entirely I mean the paint, the upholstery, the dashboard, the steering wheel, the knobs, doohickeys, and the hubcaps. It gleams like a gem. It makes me reconsider my lifelong indifference to cars. It would make a believer of anyone.

Posted by Christine Lehner at 5:42 PM No comments: