There is so much that is unfair and wretched in the world, that I hesitate to describe the unfairness I encountered late last night, reading The New Yorker. But I will.

It was an article by Margaret Talbot about the discomfiting and often disregarded fact that the ancient Greek statues and Greek buildings were not pristine white. They were painted. Painted colors. Those lustrous white marble torsos, those pure Ionic capitals, those Classic pediments, gleaming white under the Mediterranean sun. They do not represent what the Greeks created, what the ancient Greeks saw each day. “The idea that the ancients disdained bright colors “is the most common misconception about Western aesthetics in the history of Western art.”” 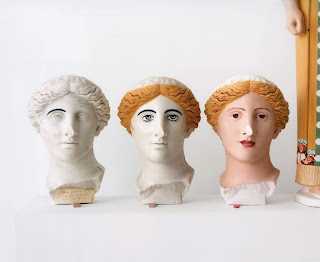 It was not a misconception held by my mother. Years ago, as long as I can recall, she knew that the ancient Greeks and Romans painted their statues and facades. Not only did she know it, she insisted on it. She drilled into us that they were painted, that they were anything but pristine white marble. They were in fact polychromatic, lively, bright, even gaudy. If we, her children, learned anything from our mother (and we certainly learned much) we learned about the polychromatic Greek statuary. Also fenestration.
The unfairness lies in the timing of this wonderful article. My mother will not read this article. She will not enjoy the satisfaction of having known of ancient poly-chromaticism all along. She will not make multiple photocopies of the article to send to all her children and selected other relatives and friends, even though we have explained to her multiple times about the merits of simply emailing a link to a given article, and thereby saving paper, postage, etc.
When I read this article about the painted Greek statues, all I wanted to do was talk to my mother, to revel with her in this affirmation of what she had been telling us all along. 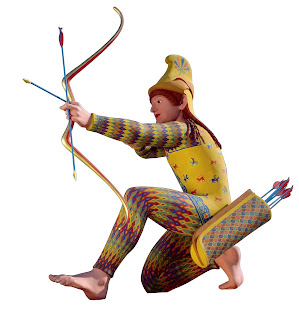 But I will not talk to my mother about this article. She is still here, but she is gone. The mother who was so bossy and confident and correct about colors, is gone. The mother who believed that all her grandchildren needed to know that the large front window at the Orchard was a Palladian window, and what that meant, is gone. The mother who encouraged me to paint, just below the kitchen molding, a wide band of a certain intense blue, Izniak tile blue, she is gone. Benjamin Moore, not having the benefit of my mother’s color knowledge, called it “Big Mountain Blue”. However named, the blue is still there, and it looks marvelous. She was so right about that blue.


As an architectural historian, and also a color consultant, my mother made it her business to know what colors were ‘appropriate’ and ‘historically correct’ for your house, your living room, even your bathrooms. In New England, where the slavish devotion to white clapboard approaches cult status, there were brave souls who strove for something more, something with color, and they paid my mother. They paid her real consulting fees to tell them what historically appropriate colors they should paint their houses.
I enjoyed this fact, because of course my mother told me what to do, for free. Gratis. Without a fee, my mother told me what color to paint my house, what color I should dye my hair (I balked, and prevailed), and what color clothing would suit my sallow Belgian complexion. About paint colors, she was invariably right. That is, she chose wonderful colors that
I would never have had the courage, or imagination, to choose. She steered me away from pastels, and I have never looked back.

The current article in the New Yorker, which I recommend, makes an additional point about the painting of Greek statues that even my mother could not have predicted*. Slithering in, on ancient polychromatic cat feet, are political implications. “Some white supremacists have been drawn to classical studies out of a desire to affirm what they imagine to be an unblemished lineage of white Western culture extending back to the Greeks. When they are told that their understanding of classical history is flawed, they often get testy.”**

My mother still knows her colors, some of them, most of the time. She remains very fond of blue.


*Though I may be not properly crediting her. Another thing my mother always insisted on, in the matter of representational art, was that Jesus was not ‘white’. My mother grew up in Cairo. She loved the Middle East. She was well aware that a young man from Galilee was not likely to be the paleface so revered in Western iconography.

Posted by Christine Lehner at 10:32 AM 6 comments: