A life in days and weeks

In the annals of transgressive behavior, this task feels surpassingly noteworthy. I have been designated to skim through more than fifty years of my mother’s daily calendars. No, not designated. I volunteered, but only because my brothers would have simply thrown them away, and my sister needed a break, after having repeatedly risked Hanta virus and finding new homes for lace bonnets, a 19th century sleigh, an antique organ and bark paintings from Guam. And silk and kidskin gloves, so many gloves. I volunteered, also, because I didn’t trust any of the others to detect what I believed I could detect.
The old house is almost empty now, almost ready to be handed over to another family, a family we don’t know and can only imagine. (The young mother has grown prize-winning pumpkins. This reassures me.) The 437 framed paintings, drawings and photographs have been distributed to offspring, given away to friends, and tossed into dumpsters. The silver and china have been parceled out to grandchildren as yet unaware of their need for such things. New homes have been found for the furniture, most of it. More than a hundred boxes of books were given to the local library, in small increments, because they limit the number of donations they will accept each day. In the barn the bullpen has been emptied of 80 years of business records. The pigeoncote no longer houses decades of office machinery: adding machines, typewriters, devices to measure the humidity content in cotton samples. Thirteen steamer trunks have been donated to local stage companies, along with dozens of hats in hat boxes, wigs, gloves, 1950’s cocktail dresses, and mod fashions of the sixties. In the time of our family, five residents of the house have died, but not a single thing they ever owned was ever discarded. Not until now. We found but did not entirely read every school paper written by my father and his brother, dating back to their less than stellar performance at Brush Hill Academy. We’ve kept the wartime correspondence, scanned it and made digital files. We are all of us traumatized by the amount of stuff. I have the antique ink blotter collection and a mission to find an ink blotter collector who will want them.* Of the five complete punch bowl sets, I gave two away as wedding presents, to young couples who are sophisticated foodies and actually think punch bowls are a good idea. We still don’t know what to do with the trunk filled with antique lace, so my sister will store it.
By tomorrow the only thing left in the house will be the model of a two-masted schooner, fully rigged, built by our grandmother’s shipbuilding ancestors in Normandy. Next week it will travel to its new home in my brother’s landlocked farm in New Hampshire. 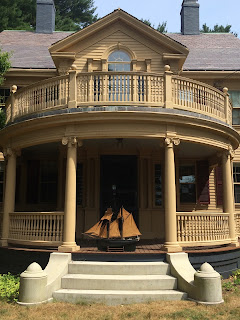 Every year my mother used the same appointment book, a standard weekly calendar, Monday through Wednesday on the verso, Thursday through Sunday on the recto. It had a brown plastic cover on which was embossed: Season’s Greetings from your friends at Leigh Textile. Dozens of these were annually presented to customers and business associates, and my mother. She disliked the plain brown cover and so each year she neatly recovered her book with decorative wrapping paper, paper featuring the designs of William Morris, oriental carpets, Islamic tiles, Rococo fabric, Pompeian frescoes, more William Morris, Toile de Jouy, kimono patterns and so on. In 50 years she never repeated.
And then she kept them, year after year. As I read I see the pattern of her life: dentist and doctor appointments, times five; school meetings, times five; cello lessons; board meetings; lectures delivered and attended; textile manufacturers conventions attended; ski trips and Caribbean trips, travels to Europe and Asia and South America; endless dinner parties for family, friends and foreign visitors. (The guest lists and menus are included.) The house hosted a cataract of foreign visitors, business associates and friends from the cotton-growing swath of the planet: India, Pakistan, Egypt, El Salvador; as well as the cotton-processing swath: Germany, France, Belgium, England, Japan. In the early decades, at the end of each year’s book I discovered a single page accounting which elderly family members were hosted at what holidays. I suspect that this was intended to document what my mother perceived as a certain in-law inequity; while her husband and his brother were equal partners in the business, my mother did 100% of the business entertaining, and 90% of the elderly relative entertaining.
As the years progress, there are no longer medical appointments for her children, but many more for herself and her mother. There are annual visits from her furrier. There are biweekly appointments with Giovanni, her hairdresser. There are weddings and graduations, and christenings. There are meetings of the Society of Architectural Historians. There are meetings with historical commissions all over New England. At the end of each year is a list of friends and associates who died in the past 12 months. Often copies of the obituaries are included.
There are, written in plain ink, evidence of disputed facts. For years my mother has asserted that she put her mother in a nursing home a scant one or two years before her death. We used to contradict her and were glared down; now we no longer correct anything she says. Even though it is right there in my mother’s 1991 book: six years before Bonne Maman’s death they moved her to the nursing home. Reading this was a bit of a revelation, but it has already been for quite a while that my mother has recreated history to suit her intention of the moment.
In one of the books from the early years of this century, there is a list at the back of “Favorite sayings of Philip”: He’s a scholar and a gentleman. It won’t be good for breakfast. Life in the tropics.
Any personal notes are few. One year, I found, written in Sharpie next to the flight information for a Belgian relative, “Finally.” On another occasion, after the entry for a dinner party including an aged maiden aunt ad a certain elderly rector she wrote: “Never again.” But such notes stand out because of their rarity.
What made me consider this perusal as transgressive behavior? This is nothing. We’ve found much weirder things in the Orchard. The calendars we have here are ordinary, banal. They are the life of a lady of a certain era. And yet they are peculiarly my mother’s.

The most interesting parts are what is missing. In each years’ books there are carefully scissored out sections, sometimes the top third, something the top fourth of a page. Never ripped, always scissored. These are the black holes, the places with the gravitational pull to absorb all that surrounds it. The scissored out bits are the event horizon from which there is no escape.

*If anyone reading this knows of an ink blotter collector, please oh please let me know.

Posted by Christine Lehner at 11:44 AM No comments: