Virginity and a shrivelled arm

One of the great things about being a writer (or pretending to be a writer) is that you can spend all day sitting at your desk – or in bed - with your computer or pen and paper, and pretend you are working. People are so gullible.
How are they to know you are playing Solitaire on your laptop, or memorizing poems by William Blake, or reading old Pogo comic strips on line, or researching the pros and cons of having your cuticles clipped at the nail salon? Sure, the choreography of your fingers over the keyboard may give the impression that you are writing a book. But in fact you are composing an irate letter to the village trustees about the waste of taxpayer dollars that will be the Stroller-derby; or to the president of Delta airlines about the problem of insufficient air circulation on airplanes, and how you start having religious visions if you are deprived of oxygen. No one knows. Because you are alone, and that is the way you like it. That is a big part of the reason to write. You can legitimately work alone. You don’t have to make polite conversation in an elevator or at lunch. You can invent impolite conversation and put it on a page.

But my agent, who is exceptionally nice and a really good agent and so I would like be agreeable, invited me to this grand party to celebrate the agency’s 40th anniversary and I thought I really should go. Even though I knew it would be a party full of unrelated writers, whose only connection would be that they were all represented by one of the agents at the agency. Writers who, like me, prefer to be alone with their thoughts and their private hells and myriad forms of procrastination. I would not know any of them. I would feel awkward and then gulp down the first glass of wine passed my way, probably much too fast. But I would still feel awkward.

Still I went, and because the party was at the Morgan Library it was possible to look intently at a bookshelf or a manuscript on display and thereby obviate the problem of making small talk with complete strangers. I could be entranced and preoccupied, and not look entirely like the pimply four-eyed wallflower at the Middle School Dance.
Then I came upon a genuine treasure.
A little backstory: After years of miseducation at an elementary parochial school, and then more years as an adult obsessed with hagiography, I thought I was aware of most of the weirder aspects of early Christianity. Obviously, to think such a thing is simply delusional. One would have to study far more than I ever have to grasp even a solid fraction of the weirder aspects of early Christianity.
So, to my shame, I knew nothing about the apocryphal Gospel of James. And there in Morgan’s elegant library, under glass, was a page from an illuminated manuscript of this very Apocrypha. According to the label, the page on display featured the scene in which a midwife delivered the baby Jesus, of his mother Mary. The midwife then denied the virginity of Mary, and promptly her arm shriveled up. Later, she held the baby Jesus in her arms, and her arm was mysteriously restored. I had never heard this story before and had never heard of a midwife even being present at the Nativity. 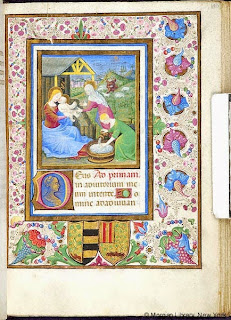 From the Morgan Library website: Hours of Cecilia Gonzaga ca. 1470
Suddenly I actually was dying to tell someone about this Apocryphal Gospel and the midwife with the shriveled arm that I have never heard of before.

But how could I introduce this subject at a cocktail party full of strangers?

Someone brings up a book I haven’t read, and I might say, “While we’re discussing things we haven’t read, you should check out the Apocryphal Gospel of James and the midwife with a shriveled arm. Denying a mother’s virginity has its risks.”

OR, Someone comments on the subdued elegance of Morgan’s library, and I could interject, “But some of those illuminated manuscript are racier than you would think. Why, I just saw a midwife with a shriveled arm because she had her hands in the Virgin Mary’s private parts, and said she wasn’t a virgin.”

OR, I bump into someone and spill their cocktail, and while apologizing and attempting to wipe up the mess, I could say, “Well at least my arm isn’t shriveling up, which was what happened to the midwife in Bethlehem who had the temerity to suggest that Mary wasn’t a virgin.”

Virgin forests are one thing, but what about the Immaculate Conception?

Much later that evening, home alone with my laptop, propped up in bed in my favored position for ‘writing’ and ‘research’, I looked up more about the Apocryphal Gospel. At www.gnosis.org, the website of the Gnostic Society Library, I found the actual text. The story was a bit more complicated, as stories often are.
It wasn’t the midwife who doubted, but her friend Salome. After delivering the baby, the midwife ran into Salome, and said, “Salome, Salome, a new sight have I to tell thee. A virgin hath brought forth, which her nature alloweth not.” Salome was dubious, and went to see Mary and tested her with a finger. Because of her blasphemy and doubt, Salome’s hand – not the midwife’s – then shriveled up. This upset Salome enormously, as it would anyone, and then she went to touch baby Jesus, and lo, the shriveled arm was restored.

Perhaps it is just as well I didn’t know the full story that night at the Morgan, because I might have felt compelled to share it.

Posted by Christine Lehner at 6:24 PM No comments:

The last words of my daughter – the mother of Leda and Iggy – before I took her to the train station, were: “Good night. I love you guys. No TV or candy.” The kids were still at the dinner table with CSB, indifferent to our comings and goings.
I drove Reine to the train station so she could hop on for the short trip north to Tarrytown for a friend’s concert at the coffee shop there, while we played with and read to and put to bed the grandchildren.
I drove back from the train station, walked into the kitchen. All three of them were watching Jeopardy! in their favored poses: CSB on a kitchen chair, Iggy bouncing on the sofa, Leda hanging from the ceiling, literally. (There is a 12-foot ladder leaning against the cupola.) CSB was offering Leda $5 for every correct answer (i.e. question) she gave, which was a pretty cheap and easy offer on his part as she is 8 years old, and this is adult Jeopardy! Also, Iggy was eating Swedish Fish.

(Ingredients: Sugar; invert sugar; corn syrup; modified corn starch, citric acid, white mineral oil, artificial flavors, red 40 and carnauba wax. Is this a good time to wonder about ‘invert sugar’?) He and Leda were engaged in a lively discussion slash negotiation of how each little packet contained 6 fishes, and how they had previously shared Leda’s – three each- and now Leda was explaining to Iggy that he must likewise share his packet with her. This seemed reasonable to Iggy. He also praised his sister for having found the Swedish Fish at all. (Having yesterday discovered them in one of CSB’s pockets, I had hidden them in the pantry. Don’t ask why I didn’t simply throw them out. There is no good answer.) CSB likewise praised Leda for finding them.
Now that the children were properly jazzed on invert sugar and game show decibels, it was time for me to put them to read and read them quiet stories. Iggy chose: Life Story, The Story of Life of Our Earth from Its Beginning up to Now. I was initially a little puzzled by this choice, until I realized the cover featured images of dinosaurs. He listened raptly as I read about the Big Bang, about back when the earth’s surface was a red-hot sea of lava, onto the Proterozoic Era and the introduction of sedimentary rocks, and of course about the hegemony of trilobites. Iggy likes trilobites, though not as much as he likes dinosaurs, sharks and spiders. He was riveted by the Paleozoic era and the movement of amphibians onto land and their evolution into reptiles. Reptiles lead directly to dinosaurs, as every three-year-old knows. Then it was the Cenozoic Era and early humans were painting on cave walls. Iggy’s interest flagged, his eyes got heavy.
Then Leda and I read from The Children’s Homer. Leda is fascinated by Greek mythology these days, and this is a good thing when you are in the third grade and the girls are behaving like maenads. After a few chapters we slipped from Odysseus’ love of his homeland, to general cuddling and idle chatter. Next to the bed is a framed print from Simplicissimus, a satirical German magazine published from 1897 through 1967, with a hiatus. It was gift from a dear friend, Bine, many many years ago, and every time I see it I mean to ask her the very questions Leda asked. Why is that man holding a knife? Is the woman asleep or dead? Why is the man with the top hat smiling such a creepy smile? I tell her the plot of Othello – very simplified. 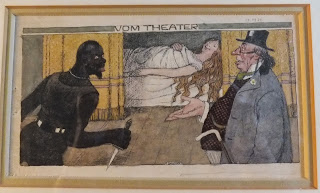 Posted by Christine Lehner at 9:24 AM No comments: