If you are going to recycle and want to feel good –or just unshitty - about recycling and the possibility of mitigating the imminent environmental collapse of the planet – then do not, as in do not EVER, actually deliver your recycling to your local recycling center or DPW.
Because if you do at least two things will happen.
1. You will despair of the planet.
2. You will think very unpleasant thoughts about your fellow citizens.
The irony being that these fellow citizens, about whom you will think deprecating thoughts, are the very ones who are availing themselves of the recycling bins. But they are doing it so very very badly.

There are two ways to recycle in our town. The first, and for many simplest, is to leave your recycling out on the curb on the appointed pick up days. One blue bin for paper, and another blue bin (in fact the bin may be any color you like, even mauve) for recyclable plastic and glass and metal. Note the adjective RECYLABLE. Recyclable means NO Styrofoam, no broken lights bulbs, no light bulbs at all, no plastic bags (These can be recycled at specific bins outside the local Foodtown), no electronics, no heavy metals, no paint cans.
The second way to recycle in our town to load up your recycling into your car and personally bring it down to the DPW, where they have 4 dumpsters for paper, and 3 smaller dumpsters for plastics.
That seems fairly simple, does it not?

You could point out that all our local efforts to recycle are but a pea shooter directed at the ginormous monster that is Climate Change wrought by human activities and the increase in greenhouse gases, a ginormous monster that will likely devour our planet before our valiant local recycling efforts make any difference at all to the End of Life as We Know It.

I will not point that out because, well because most days a tiny peashooter is all I have at hand. Plus, recycling makes me feel marginally better about being a citizen of such a ponderously wasteful and selfish country.

Which brings me to this specific rant. Here at Let it Bee farm, we bring our recycling to the DPW once every week or two. Also my mother’s recycling, a concept she no longer comprehends. CSB, who feels very strongly about these matters, does not like leaving our recycling at the curb because papers often blow away and get strewn across the road and become dreaded litter. That is why we load up the back of his pickup with our blue bins and go to the DPW, where we put all our paper and cardboard into the large Paper Dumpsters, and we put our plastic and glass and cans into the Mixed Metals Dumpsters. (I have to admit that keeping to this plan becomes especially challenging when we are dealing with plastic water bottles that were pissed into and then thrown out of some tiny-bladdered slob’s car onto the verge along Broadway, where I periodically collect litter. For more about this, see SQD: Rant about Littering.)
The signage makes it quite clear which is which. The signage also states very clearly that NO plastic bags are to be thrown in with the plastic and glass etc.

Here lies the problem. By personally delivering our recycling to the dumpsters at the DPW, I have the opportunity to see what my fellow citizens – obviously well-intentioned citizens who want to recycle and Save the Planet – put into the dumpsters.
Just this week, in the dumpsters designated for paper and cardboard, I saw: aluminum takeout containers, paint cans, heavy plastic detergent containers, a stainless-steel water dispenser, and a fluffy white bathrobe.
It was the bathrobe that put me over the edge. You can blame the bathrobe for this rant. I received a quite similar fluffy white bathrobe as a Christmas gift, and while I did not actually need a bathrobe (fluffy or otherwise,) I have grown fond of it. On account of it being so fluffy. Bathrobes, fluffy or not, never belong in the Paper and Cardboard Dumpster. 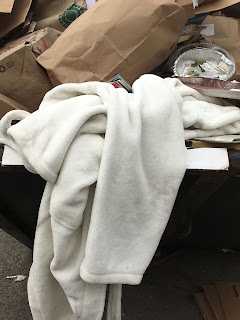 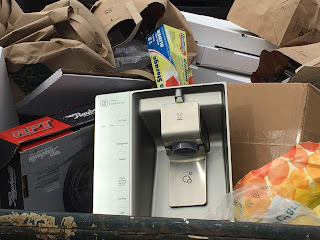 I have not even addressed the very compelling question of those plastic windows in envelopes from organizations seeking to part you from your money, or annoy you in other ways.
Nor have I once mentioned what happens to recycling machinery when the wrong materials are fed into the maw.
Also unmentioned is the serious likelihood that because of the co-mingling of contaminated materials, the whole lot will be rejected by the recyclers and added to an already enormous landfill.

Posted by Christine Lehner at 3:41 PM

Nothing a good department of sanitation code enforcement officer could not address with a few tickets.