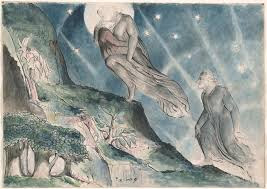 Sometimes a small and apparently unimportant question, such as, Why did my mother acquire so many postcards of William Blake’s Lucia carrying Dante in His Sleep? will trigger a slew of other questions. There is a domino effect to questions, as with so much else.
Postcard stashes are one thing. I can forgive myself for not knowing the reason for them. I can even speculate. The watercolor, one of Blake’s illustrations for the Divine Comedy, is owned by the Fogg Museum at Harvard. I guess that this particular surfeit has something to do with the HILR (Harvard Institute for Learning in Retirement) class on Dante’s Paradiso that my father took in 2010. After his strokes, my father forgot discreet decades of his life (Please explain how Cuba came to be Communist, he once said), but his judgment and critical powers were remarkably intact. So, he kept on taking classes at HILR, and, as always, was a diligent and engaging student. That did not stop him from calling on the evening before his class and asking me to read Dante’s Paradiso and come up with 10 or 12 pithy observations and insightful questions. I got off easily. When Dad was studying the Economics of Global Climate Change, he called my sister and asked her to read the assigned text, 836 pages of small print, and give him a detailed synopsis. 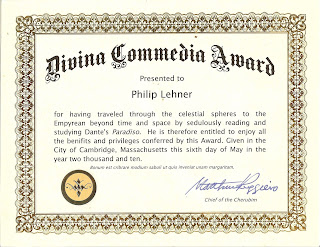 Now what do I do with these 20 postcards? Would you like one?
That was just the beginning. In the latest pile we found multiple postcards from Ireland. We had no idea she had even been to Ireland. She had 37 – thirty-seven! – postcards of a detail of the Tara Brooch, from the National Museum of Ireland. Not even the whole brooch, just a detail. 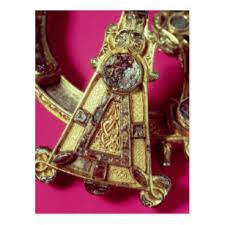 As for the Tara Brooch, it raises more than a few questions, and not just about my mother's stash. Although it is called the Tara Brooch, the piece was found near Bettystown in County Meath, at least 25 kilometers from Tara. It was discovered by either a peasant woman, or her two sons, or one of her sons. The brooch didn’t even start the fashion in Celtic Revival jewelry. That was already in full swing in 1850 when the brooch appeared. And apropos of nothing, my mother was never interested in things Celtic; her tastes ran to the French, the Egyptian, the Ethiopian, and the Vietnamese.

No, that felucca has sailed. I will never ever know why the Dante cards, why the Tara Brooch, why the eight postcards of Mrs Elizabeth Freake and Baby Mary, by an unknown American of the 17th century. 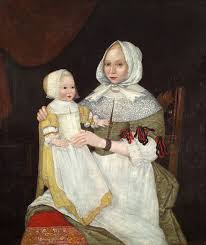 So many unknowns.
How can I not be annoyed with the idiotic former self who neglected to ask: What are the full names of the seven suitors who wooed and wanted to wed you, my mother, before you met my father? Why, when you kept so many other things, did you destroy the letters from Mr. Jago? Why did you stop going to Mass for many years, and then start up again? Who was your favorite child? Was there ever a time when you knew more than a few dozen words in Arabic? Did my father ever work for the CIA?
Don’t be too harsh, I tell myself. At least five years before we had the tiniest inkling, my mother was already afflicted with Alzheimer’s. She was just covering it up fairly well. As was my father, on her behalf and his own. They were in denial. Not for nothing was my mother who grew up in Egypt known as Queen of Da Nile. Her mantra was, “If you have nothing nice to say, say nothing at all.” Mine might well have been, “Spit it out. Think later.”
Those fucking questions.
There are so many things I will never know, now that a typical conversation with my mother conversation proceeds thus:
Mom: There’s that nice little thing there in the back….(She is lying on her bed with the duvet pulled up to her chin, and facing the Christmas tree on her screened porch.)
Christine: Do you mean the tree?
M: Yes, the tree.
C: It’s very nice.
M: Everybody thought it was mortar.
C: Mortar or water?
M: Mortar.
C: Oh.
M: Well they wanted to be mean and everybody always…I couldn’t believe it, it was so bad.
C: I’m sorry.
M: Sigh.
C: Everything is fine now.
M: But I have some things. I have some red papers which are white and they’re going to go in here (she lifts the duvet slightly and leans slightly inward) and they’re going to go in here and they …….
C: OK! Mom! Everything is lovely.

One of the more disheartening things I have noticed, whenever I set out to transcribe a conversation with my mother, is how limited my own vocabulary becomes. I use more words, and more complex words, with a three-year-old. My mother can still speak three languages, and can make no sense in any of them. It is like trying to cook a meal with three ingredients, and one is water and one is half a carrot.

Posted by Christine Lehner at 6:05 PM

That last image of trying to cook a meal with three ingredients just blows me away. Rilke says it's important to "learn to love the questions." Even though your mother can't answer all your questions, we readers are moved that you keep asking them. Thanks for posting!