Domestication of the dog has not nullified this instinct to lead or be led. This becomes a problem whenever an individual dog does not receive proper guidance, through training, and fancies herself to be the leader, or alpha. There should be no question in a dog’s mind about who the alpha figure is in her life- you are. The Monks of New Skete 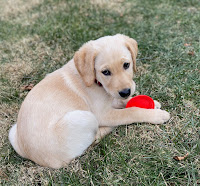 So glad SQD is back!
Facinated by your puppydom...

You are the Alpha and Omega of bloggers! Love this piece!

we do not live in a fair or equal world, and as a human I have a few advantages—-I love reading about your life adjustment to the sweetest Ghengis Khan-ish puppy imaginable. I would say one advantage you have in life is FRIDA. Clearly you are in love. This was a puppy treat to read.

Hooray! You're back! Love this!