The Best Tempest. Ever.

First my friend Marianna told me that she had been asked to play the part of Prospero in a production on the Tempest on the island of Cuttyhunk.
Cuttyhunk? I said.
Yes, do you know it? She said. 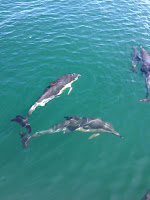 So, yes, I know Cuttyhunk.
And if my friend is going to be Prospero, I will come to see her.
She tells me the name of the fellow who will produce this island Tempest. I have no idea who he is, but of course my cousin and his wife who spend summers on Cuttyhunk and know its history down to the sassafras yields in 1699 know him, and fill me in on certain particulars.

Months pass.
A year passes.
I ask Marianna when she will be Prospero, and she says the date is not yet fixed. I give her the dates of several upcoming weddings of nieces and nephews (none of the fishing gene genre) so that, assuming she has any say in the matter, The Tempest will not be performed on those dates.
Then there is a date. She had no say, and neither did I, so it was pure lucky chance that the performance occurred on a day when no relative of mine was getting hitched.

One of the Cuttyhunk particulars about which my cousins alerted me was the Triple E threat.
My cousins kindly sent a link to a site where one can buy clothes already permeated with
Permethrin, a chemical insecticide that behaves like natural extracts from the chrysanthemum flower. If only I knew more about the natural behavior of chrysanthemums. My cousin Heidi, my traveling companion and fellow-braver of arachnid threats, and I proceeded to order several articles of clothing thus permeated. I tried not to think too much about the possible ill effects of wearing so much permethrin next to my body. If it repels ticks and mosquitoes, who in the grand scheme of things are similar to me in many ways, then what will it do to me?

The day before my departure for Cuttyhunk, Heidi called to tell me that our ride to the island, aboard the water taxi ‘Seahorse’, was cancelled, due to the Gale Force Winds expected. Of course there were Gale Force Winds and Small Craft Warnings, because we were going to see The Tempest. Get it? The Tempest. Still, no Seahorse.
After several amusing conversations about this uncanny convergence of weather and theater, we decided to take the ferry that departed New Bedford at 6pm. The ferry is larger than the Seahorse, and can manage high seas. Or medium high seas.

Driving to New Bedford I stopped in New Haven for lunch with a friend, and while we were walking from lunch to the Women’s Fountain at Yale, we heard a ruckus. On the corner of York and Elm was a man shouting about Jesus and sinners into a very amplified microphone. I read his sign and learned that it was SIN AWARENESS DAY. I wanted to believe that this particular day, this day when I happened to be in New Haven en route to Cuttyhunk, was the one and only particular SIN AWARENESS DAY. The way March 25th is Mustard Awareness Day and July 26th is Kiss a Wallaby Day. 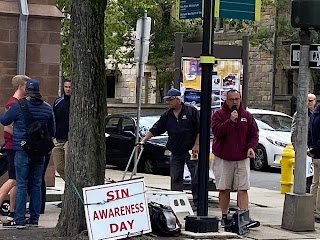 Naturally I am aware of my sins every day, and most evenings.

Then I met Heidi in New Bedford and we took the ferry to Cuttyhunk.
As previously mentioned, Cuttyhunk is famous for its fishing. It is not famous as the inspiration for Shakespeare’s Tempest. Exactly one 19th writer posited that Shakespeare had read the journals of a sailor who had traveled to Cuttyhunk with Bartholomew Gosnold in 1602. The crew came ashore, collected several bales of wild sassafras, a valuable commodity in London, as it was considered to be a cure for syphilis. Which it was not. Twenty two days later, they all sailed back to England, so that real American history could begin properly in 1620.** The sailor wrote up his journals of sailing to this tiny island full of sassafras, ticks and quahogs, and it is within the realm of possibility that Shakespeare read the journals and was thereby inspired to write The Tempest.
It’s not much to go on, but it makes an excellent raison d’être for producing the play on a tiny island with exactly 12 year-round residents.

I am chagrinned to report that the trip from New Bedford to Cuttyhunk was remarkably smooth. We had lovely views of Penikese at sunset. 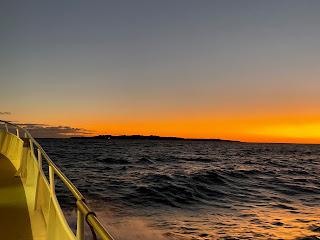 The next day presented a sunny countenance, but windy. Very windy. Wind does not bother ticks, but it can send vessels off course and onto the shoals. During the dress rehearsal Prospero shouted her lines over and across the northerly winds. 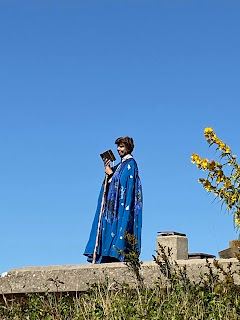 Then it was showtime, and the wind died down. From all over the island, from all over the fifty acres that are sparsely inhabited, people and golf carts converged on the slope overlooking Westend Pond and the Outer Bunker. Actually, almost everyone came from either the Avalon, or PetesplaceRentals.***

About thirty of us, many wearing multiple layers of clothing sprayed with the above-mentioned permethrin, sat upon blankets and rugs likewise sprayed with permethrin, spread over the rough grass that is home to multitudes of vectors of Triple E, Lyme disease, of ehrlichiosis, of a “torment to lay upon the damned”, of “all the infections that the sun sucks up from bogs, fens, flats, all wound with adders, who with cloven tongues do hiss [] into madness.”
Accompanied by beautiful live music played on a massive bass and two other instruments I can’t recall (and this is why a printed program would have been helpful), the play began. 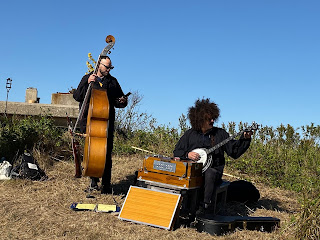 Prospero “put the wild waters in this roar… and the sea mounting to the welkin’s cheek” and then he allayed them. The sailors “plunged in the foaming brine, and quite the vessel.” Noisemakers were insolent. Dogs were blasphemous. Miranda (played by the excellent Rebecca Blumhagen, and also directed) espied Ferdinand (Zachary Chastain, worthy of her affections), the first young man she has ever seen, and falls instantly and madly in love. “How beauteous mankind is! O brave new world that has such people in it!” Meanwhile, Trinculo, a jester and Stefano, a drunken butler, appear and reappear, popping out of old WW2 bunkers, and amusing us all. As those two, and others, Karis Danish and Nicole Rosenberg were brilliant, riffing with modern inflections, jumping and stumbling in the sea grass, taunting the indefatigable Caliban, poor Hag-Seed, played by Greg Brostrom.
There were revels. There was true love. There were long separated brothers reconciled.
The revels ended, and Prospero abjured his rough magic. Marianna/Prospero declaimed to us, and to the setting sun, that she would “break my staff, bury it certain fathoms in the earth, and deeper than did ever plummet sound I’ll break my book.” It was wonderful, and I didn’t want it to end. Marianna, a mother and grandmother, brought to the role the depth of a true nurturer, with understanding of the great bliss and the great terror, that are the hallmarks of motherhood. 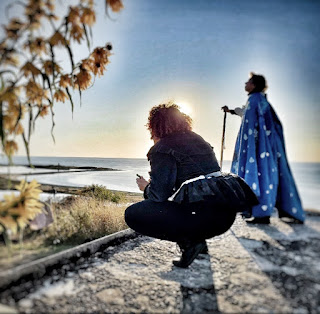 It is true that The Tempest has been performed on every continent but one, and Prospero’s indelible farewells, orations, and lamentations have been articulated, shouted, whispered, uttered, shouted maybe even lip synced by such eminences as John Gielgud, Derek Jacobi, Max von Sydow, Frank Langella, Vanessa Redgrave, and Helen Mirren.

Well, friends, add to their number the remarkable Marianna Houston.

*For example: I have another nephew (one among many) who does not have the fishing gene. His girlfriend his Serbian; also partly Bolivian. The girlfriend’s Serbian father, a charming engineer, comes to Cuttyhunk once every year – from Belgrade – in order to fish. He stays at The Fishing Club. When I am visiting with cousins on Cuttyhunk, we sometimes gather at The Fishing Club for a very hearty breakfast. I do not use the Lourdes simile lightly.

** I write as one raised within spitting distance of Plymouth Rock, so I know this for a fact.

*** The Pete (97 and still fishing) of petesplacerentals.com is the original bearer of the familial fishing gene. Actually, no, it was probably his father, my grandfather. My grandfather, Hans Lehner, was born near Augsburg, Germany where it is unlikely he did any ocean fishing. Later, as a businessman in Boston, he fished often with his two sons. For reasons that only a person afflicted with the fish gene can possibly understand, many of the fish they caught were stuffed and mounted on wooden escutcheons and then hung all around the dining room, just below the egg and dart molding. As a child, no matter where one was seated in the ancestral dining room, there was an excellent view of dead and stuffed fish. The swordfish, naturally, was especially appetizing. For dining room décor it can only be topped, in my personal memory palace, by the life-size horizontal death-portrait of a second cousin Paul Brancart, hero of the Belgian resistance, that hung above the side board in the dining room of a great-uncle’s house in La Louvière, Wallonia, Belgium.

Posted by Christine Lehner at 8:24 AM

Thanks Christine. I too do not have the "Fishing Gene." But do remember that your Grandfather came from Fischach, or "Fishbach," at the confluence of the Neufnach and the Schmutter, where Hans most certainly did fish I am sure..

Also take a look at the Coat of Arms for Fischach:

What a pleasure your blog has provided me (again). I loved getting to experience Marianna's Prospero in that incredible setting - so like Shakespeare's island off Italy. Thanks for the trip across the not-tempest-torn waters and the introduction to Pete and other fish-gene members of your family.
Louisa